Loyalist or a Patriot

In the eighteenth century, during the American Revolutionary War, there were two opposing sides fighting against each other, the Patriots and the Loyalists. The Patriots rebelled against the British control, while the Loyalists, also known as “Tories” to the Patriots, remained loyal to the British crown. They chose to support the authority of the king rather than the power of the Parliament. Both driving forces had many golden opportunities to win the American Revolutionary War, but the Loyalists were unable to take advantage of their chances and that is why the war was won by the Americans and not the British.

The Patriots had many benefits and they knew how to take advantage of them as well. The Patriots were mainly fighting in the Revolution for political independence, cultural integrity, and for the protection of their land and property. They had the advantage of fighting on their own grounds and also had a vast militia to cover their whole territory. At the end, with the help of colonial army generals and considerable experience in the colonial the Patriot affairs proved to be formidable.

On the other hand there were the Loyalists, who believed they could win the war for England, unfortunately for them that this did not happen. From the beginning, Loyalists opposed the war because they did not want America to get its independence and depend on Britain for various needs. Although the British had the worlds best equipped and the most disciplined army, they were not as well prepared to fight compared to the Patriots army, which might have been a key factor in the British losing the war.

The British were also unused to the American land, knowing this, the Patriots used it to their advantage. However, the most significant aspect was that the British greatly underestimated the capacity of Americans to fight.

Knowing the success of each side, choosing the Patriots would be the most sensible thing do. They were familiar with their own land, had a large militia and the support of Americans such as John Adams, Mary Ludwig Hays (Molly Pitcher), and many other men and women. Patriots wanted to declare their country independent from the rest of the countries and the Loyalists did not want this to happen. Loyalists who continued to support the British crown were considered traitors to Patriots who turned again their citizens and collaborated with a foreign army. In the end, the Patriots hard work paid off with the use of strategy and a little luck. America finally got its independence.

Loyalist or a Patriot. (2016, Aug 04). Retrieved from http://studymoose.com/loyalist-or-a-patriot-essay 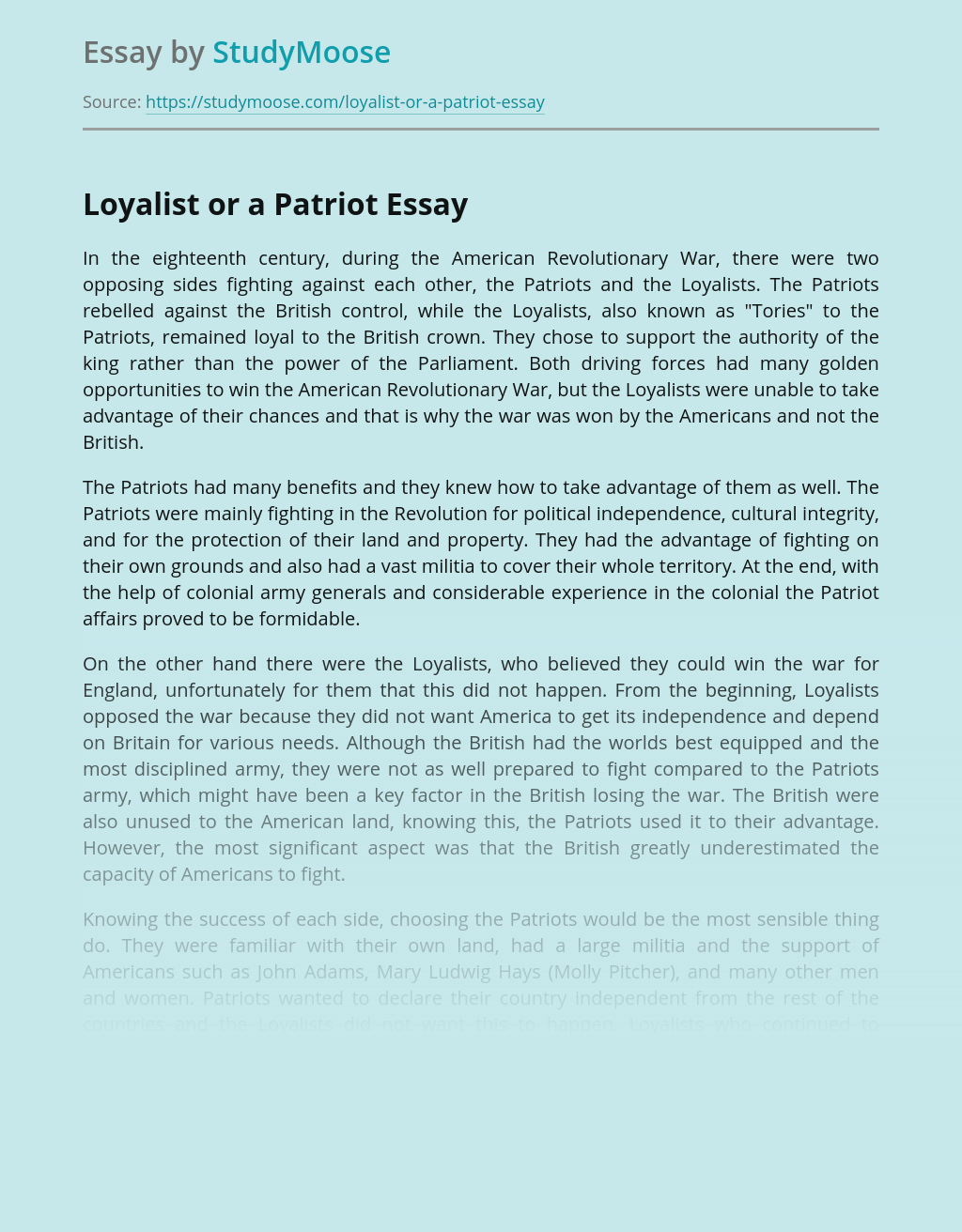 Don’t waste time
Get a verified expert to help you with Loyalist or a Patriot
Hire verified expert
$35.80 for a 2-page paper
Stay Safe, Stay Original