Wilson and the Treaty of Versailles

The statement “It was the strength of the opposition forces, both liberal and conservative, rather than the ineptitude and stubbornness of President Wilson that led to the Senate defeat of the Treaty of Versailles” is false. Instead, Wilson’s unbending will and unwillingness to compromise brought about the ultimate defeat of the Treaty of Versailles. All debate came from Wilson’s safeguarding of what he deemed a league to prevent all future war, the League of Nations.

Though many in the Senate, including Henry Cabot Lodge, called for reform, President Wilson would sacrifice anything to keep the League from ever seeing change.

Don't use plagiarized sources. Get your custom essay on
“ Wilson and the Treaty of Versailles ”
Get custom paper
NEW! smart matching with writer

Wilson approached asking for everything or nothing, and came out empty. One Democratic senator charged that the president had “strangled his own brainchild with his own palsied hands rather than let the Senate straighten its crooked limbs”. Wilson hoped to move forward with a potentially social, political, and economic entity capable of regulating the world, yet would up with political opposition and a moral dilemma.

Proficient in: Treaty of Versailles

Although armed immediately preceding the war with a frenzied, world-wide love and with three other nations with which to suppress Germany, Wilson’s own inadequacies would prevent an agreement between president and Congress, and ultimately crippled the effectiveness of the Treaty of Versailles. Perhaps the League would never have been such an issue if not for Wilson’s first blunder during the November 1918 Congressional elections. Hoping to gain leverage at the peace talks, Wilson personally appealed for Democratic votes, despite his “Politics Is Adjourned” policy.

The move badly backfired, allowing such individuals as Henry Cabot Lodge to step into the forefront. Republicans became increasingly annoyed with Wilson and his tactics when he decided to attend the peace conference in person, and then refused to include any conservatives in his official peace party. Wilson began agitating his opponents even before the League of Nations had been put under the microscope, toughening an already difficult task that was the ratification of such a league.

Wilson somewhat half-heartedly attended meetings concerning the distribution of former colonies and protectorates. He attempted to jam through an unorthodox combination of imperialism and Wilsonian idealism, all the while focused primarily on the creation of his brainchild world parliament. William Borah refuted the creation of the League of Nations, proposing it would use “force to destroy force, conflict to destroy conflict, militarism to destroy militarism, war to prevent war”, an unfashionable view of a league intended to guide through the practices of peace and consulting (Doc A).

Wilson would win a small victory in 1919, when Italy’s Vittorio Orlando, Britain’s David Lloyd George, and France’s Georges Clemenceau agreed to make the League of Nations and integral part of the final treaty. Now that League of Nations was officially the most important aspect of Wilson’s final Treaty of Versailles, Republican senators couldn’t wait to demolish and thoroughly dissect is proposal. Irreconcilables, such as Senator William Borah of Idaho or Senator Hiram Johnson of California, believed the League a “useless sewing circle” or “overpotent super-state”.

Wilson instead saw the committee as a diplomatic community where nations may interact and converse over significant topics. Upon a first voyage back to America from the Paris peace table, 39 Republican senators decreed that the Senate would not approve of this League of Nations in its present, imperfect state. While Wilson focused mainly on such a community, others involved in the resolution of WWI instead sought vengeance. France, a target of the Germanic states for hundreds of years, intended to crush them under their boot.

Clemenceau demanded the Rhineland and the Saar Valley, and debate between the four presiding nations ensued. France would drop its demand in exchange for the Security Treaty, where Britain and America pledged to aid France in another German invasion. Though well-intentioned and with the right ideas, Wilson would continue to advocate his idea of what the League of Nation should entail, despite cries of outrage from his own Senate. Many possessed differing feelings of the League of Nations and the Treaty of Versailles when it was handed to Germany at gunpoint in June 1919.

Jane Addams provided insight on women’s’ views of the League, mentioning that “The League of Nations afforded a wide difference of opinion in every group… The difference of opinion was limited always as to the existing League and never for a moment did anyone doubt the need for… an adequate international organization” (Doc I). W. E. B. Du Bois provided insight on African American’s view of the League, providing that “This is the most forward-looking event of the century.

Because of the idiotic way in which the stubbornness of Woodrow Wilson and the political fortunes of the Republicans became involved, the United States was not represented” (Doc H). Upon being shown the treaty that would determine the sanctions of the war, the Germans noted that only four of Wilson’s Fourteen Points were honored. They had hoped Woodrow would uphold the typical American democratic way, yet it was clear with Wilson’s preoccupation with his committee that the theme of the treaty was revenge. Returning to America again, Wilson was hit with a wave of political opposition.

Many called out that the new treaty refuted Washington’s policy of no entangling alliances, whereas other drew criticism upon the harshness of the document. An image depicts the “League of Nations” marrying Woodrow Wilson and “Foreign Entanglements”. The pastor has asked that anyone who see a reason for the two not to be joined step forward, and the “US Senate” holding “Constitutional Rights” is seen busting through the window (Doc E). Though criticism was drawn, the “Wilson League” was still supported by the majority of the people.

Lodge realized this, and intended only to “Americanize” the League. Lodge then delayed the process in order to confuse the public of their opinion, going as far as reading the 264-page treaty. The election of 1920 was not far around the corner, and Wilson began campaigning for votes, talking favorably of his League of Nations in as many cities as he could. Unfortunately, Wilson would suffer a stroke, leaving Senator Lodge at the helm to do as he pleased. Lodge introduced 14 reservations to the treaty, a parody of Wilson’s Fourteen Points.

He and others that opposed the treaty disagreed most directly with Article X of the League, which bound the US to aid any nation of the League under assault. Wilson backed Article X, never doubting his work. He stated, “When you read Article X, therefore, you will see that it is nothing but the inevitable, logical center of the whole system… If it should ever in any important respect be impaired, I would feel like asking the Secretary of War to get the boys who went across the water to fight,… and I would stand up before them and say,… You have fought for something that you did not get” (Doc C).

Unwilling to hand over their right to declare war, Congress used that as a sticking point as to why the League could not succeed. Wilson then displayed stubbornness in his own regard, unwilling to accept the revisions of a Republican. “I take the liberty of urging upon you the desirability of accepting the reservations now passed…. I have the belief that with the League once in motion it can within itself and from experience and public education develop such measures as will make t effective”, wrote Herbert Hoover, urging Wilson to accept the League with the added reservations (Doc D). Despite the advice, Wilson told all Democrats to vote no to the resolutions, and the revisions were promptly denied. It became clear that unless the reservations were approved, the entire treaty would be rejected. When the reservations were presented once more in March 1920, Wilson again told Democrats to veto the proposals. In this way, Wilson was directly responsible for the death of controversial and beloved brainchild.

Though it can be said that the Lodge-Wilson fight, traditionalism, isolationism, and disillusionment ripped apart the League of Nations, the brunt of the blame lies in Woodrow’s overconfidence in his ideas and unwavering mindset. Though the Senate was somewhat too convinced that the League of Nations was an atrocity and was unwilling to compromise its compromises, it’s clear that Wilson’s own behavior was much more responsible for the Senate defeat of the Treaty of Versailles.

Acting impulsively, Wilson favored the creation of the League of Nations to all other parts of an ultimate resolution throughout Europe. His stubborn behavior, awkwardness, and incorrect mindset for a bill that required reforms ultimately derailed the creation of the League. Wilson allowed differences between himself and Henry Cabot Lodge to negatively influence his perception of Lodge’s reservations. Woodrow’s personal bias toward the left separated him from a largely conservative Senate, and ultimately led to the destruction of what could have been his finest contribution while acting as command-in-chief.

Wilson and the Treaty of Versailles. (2017, Jan 20). Retrieved from https://studymoose.com/wilson-and-the-treaty-of-versailles-essay 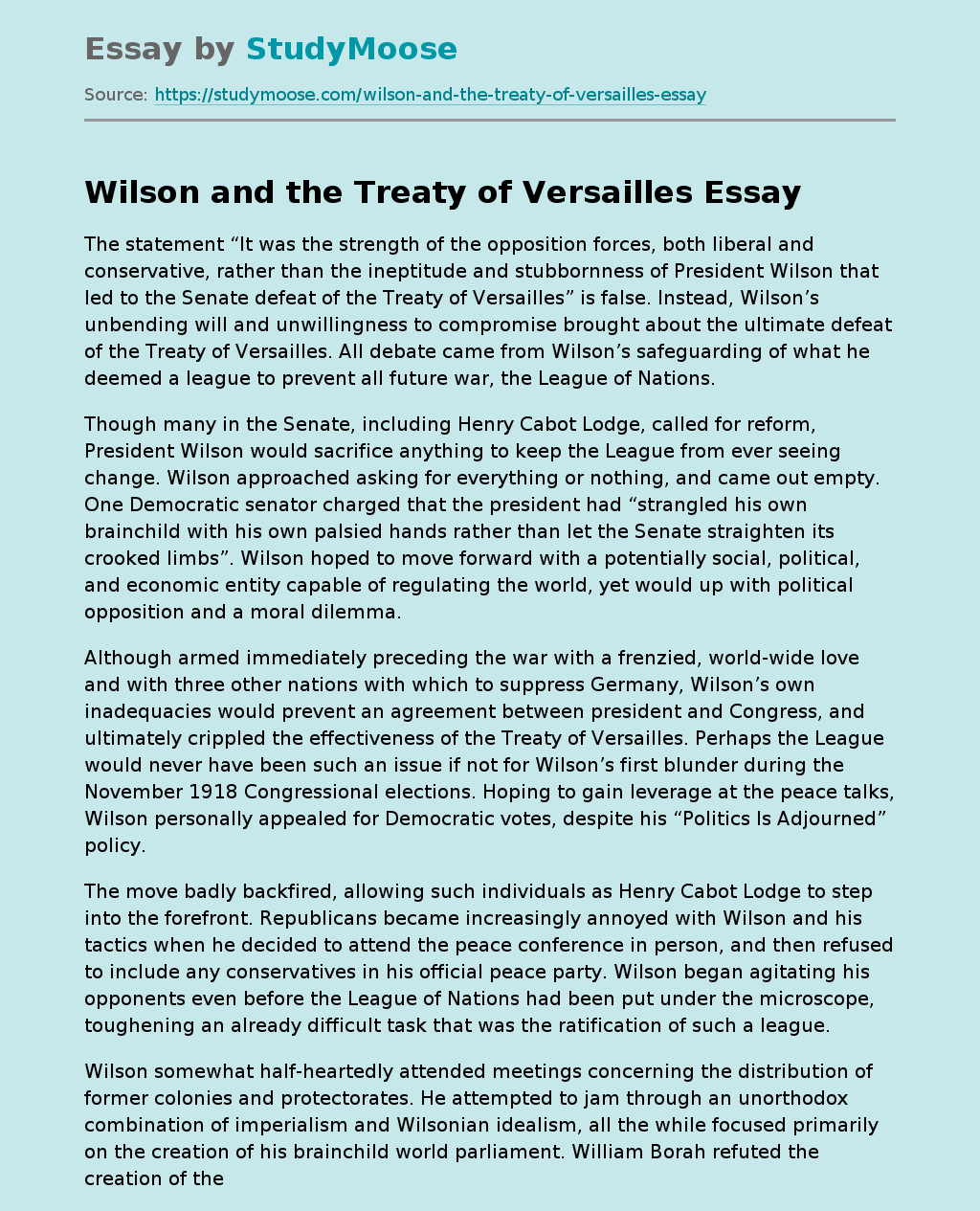