The Treaty of Waitangi

The treaty of Waitangi is a formal agreement between two states or sovereign powers. It was signed on the 6th February 1845 and there were 512 signatories. Michael King suggested that politics and economics were intertwined in the 19th century. NZ and this situation can be highlighted when examining the causes for the signing of the treaty of Waitangi, this included Lawlessness, the roles of the humanitarians, fear of French , the role of Busby and also the NZ company. The consequences of the signing can be separated more clearly through an emphasis on the issue of sovereignty (politics) in the short term and concentrated on the bay of islands as colonisation increased back in the late 1800’s.

Turn in your highest-quality paper
Get a qualified writer to help you with
“ The Treaty of Waitangi ”
Get high-quality paper
NEW! AI matching with writers

The long term impact of the signing of the treaty can be best seen through the issue of land (economic) impacting on wider NZ. One long term consequence of the treaty of Waitangi is lawlessness; this is one of the most significant causes because there were heavy concern about the activities of the settlers, whalers, sealers and traders.

The British colonial office was worried about their inability to control their subjects from Sydney let alone the other side of the world and the effect it was having on their imperial image. An example of this is the Elizabeth affair in 1830 Terauapahau hired captain Stewart to sail some of his Ngati toa chiefs to surprise attack on Ngai tahu in banks pensuila , they succeeded , but then Ngai tahu turned to British legal system to sort it out.

Attempts to have steward tried in a NSW court highlighted Britain’s inability to control its citizens in relation with Maori. Reports were exaggerated by missionaries which lead them to how the humanitarians reacted. The humanitarians pressured the colonial office in London to control the impact of lawlessness and disease on Maori, highlighting the need of annexation. Another short term political cause of the treaty of Waitangi was the fear of French and the role of busby . In 1722 when Du fresne was killed on his ship the LA favourite appeared over 50 years later in NZ sparking further fears of French. This was kindled by the CMS who feared the French and the French Catholics as rivals in the conversion of the Maori. Barrion de theirry threatened to set up French colony in NZ and proclaimed himself king of sovereign chief meaning he had political power.

This then caused Britain to be worried as their use of New Zealand’s resources was jeopardized. In response Busby sent to act as British resident 1833, his job was to enforce law and protect Maori however he failed to do so due to lack of military and financial support, he was then known as the “man o war without gun” by Nga puhi. British then disrespected him and to the Maori he has no Mana. Because of this he was attacked by some nga puhi at his house at Waitangi but no other chief would help him. In response Busby drew up declaration of independence 1835 to eliminate threat posed by de Thierry which was signed by 35 northern chiefs. Maori were recognised as independent people and therefore New Zealand an independent nation. Another short term economic cause of the signing of the treaty of Waitangi was the NZ Company. The NZC under Edward Gibbon wakefield was organising large scale settlement in NZ and dispatched the ship TORY with a number of settlers on board that had bought land from settlement plans in England. There was a lot of concern about the legality of their purchases and the impact many more settlers would have. As British intervention became more likely at the end of the 1830’s, there was a sudden rush in large scale land purchases especially from NSW the claim of NZC to 20 million acres. Maori were pressured into flimsy deals for large areas.

It was also debateable whether Maori viewed land transactions the same way as Europeans. The British government felt a head to protect its investment and prevent conflict which might occur as a result of land transactions. An example of this is when Baron de Thierry claimed he bought the land , Maori thought otherwise ( one of may dubious land deals). Therefore this was the third most important cause to the signing of the treaty. Its impact was limited however it speed up the signing of the treaty as its incoming immigrants gave the treaty process a deadline.

The Treaty of Waitangi. (2016, Mar 21). Retrieved from http://studymoose.com/treaty-of-waitangi-essay 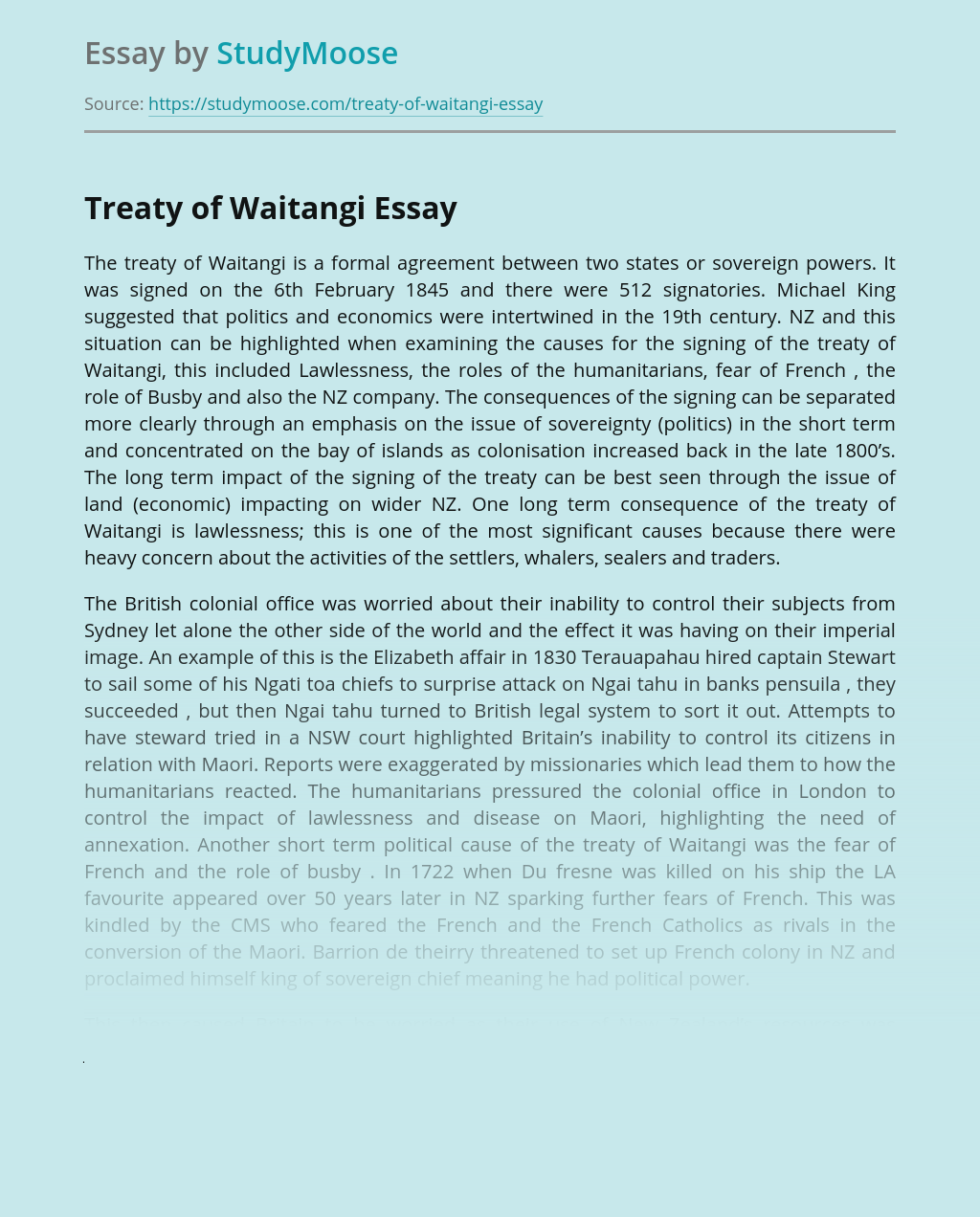 Turn in your highest-quality paper
Get a qualified writer to help you with
“ The Treaty of Waitangi ”
Get high-quality paper
Helping students since 2015
Stay Safe, Stay Original