Differences Between Keynesian Economics and Classical Economics Economics thinking has evolved over time as economists develop new economic theories to fit the realities of a changing world. Monetary and fiscal policies change over time. And so does our understanding of those policies. Some economists argue that policies that lower the unemployment rate tend to raise the rate of inflation. Others insist that only unexpected inflation can influence real GAP and employment. If the latter economists are right, does government always have to surprise the public in order to improve economic conditions?

In this essay, important differences among schools of macroeconomic thought are discussed.

Don't use plagiarized sources. Get your custom essay on
“ Keynesian Economics and Classical Economics ”
Get custom paper
NEW! smart matching with writer

Most economists probably do not align themselves solely with any one theory of macroeconomics, choosing instead to incorporate pieces of various schools of thought. But the two approaches we discuss in this essay I. E. Keynesian and classical, have had enormous impact on economics thinking and policy. Keynesian economics, named after the English economist John Maynard Keynes, dominated the economics profession from the sass through the sass.

Some economists today refer to themselves as “new Keynesian.

The common thread that pervades Keynesian economics is an emphasis on the inflexibility of wages and prices. This leads many Keynesian to recommend an activist government macroeconomic policy aimed at achieving a satisfactory rate of economic growth. Keynesian economics grew out of the Great Depression, when inflation was not a problem but output was falling. As a result, the Keynesian model of macroeconomic equilibrium assumes that prices are constant and that changes in aggregate expenditures determine equilibrium real GAP.

In an aggregate demand and supply analysis, the simple Keynesian model looks like the graph shown at right.

This flat region of the aggregate supply curve reflects the Keynesian belief that inflation is not a problem when unemployment is high. As the level of real GAP increases, and more and more industries reach their capacity level of output, the aggregate supply curve becomes positively sloped. Keynesian argue that information about the economy, including prices and wages, is not perfect. When workers and businesses negotiate wages, they may not know what current rises are, and they certainly do not know what future prices will be. Furthermore, many labor contracts fix wages for long periods of time.

This means that wages are not flexible; they cannot adjust immediately to new price levels. Keynesian economics focuses on the role the government plays in stabilizing the economy by managing Keynesian Economics and Classical Economics By thanklessness short run. They believe that the economy is not always in equilibrium. For instance, if the demand for labor falls, we would expect the equilibrium price of labor (the wage) o fall and, because fewer people want to work at a lower wage, the number of people employed to fall. Keynesian believe that the government must take an active role in the economy to restore equilibrium.

Keynesian argue that wages do not tend to fall, because firms choose to lay off workers rather than decrease wages. Businesses retain high wages for their remaining employees in order to maintain morale and productivity. As a result, wages are quite rigid. This wage rigidity is reflected in price rigidity in goods markets, according to Keynesian economics. Classical economics is he theory that was popular before Keynes changed the face of economics in the sass. According to classical economics, real GAP is determined by aggregate supply, while the equilibrium price level is determined by aggregate demand.

Classical economics assumes that prices and wages are perfectly flexible in order to clear markets rapidly. This rules out contracts that fix prices or wages for periods of time. It also rules out the possibility that people are not aware of all prices and wages. They know when prices have gone up and ask for wage increases to compensate. Classical economists believe that because real wages are lower during a secession, people are more willing to substitute non-labor activities (going back to school, early retirement, work at home, or leisure) for work.

As the economy recovers and wages go up, people substitute away from non-labor activities toward more working hours. The substitution of labor for leisure and leisure for labor, over time, suggests that much of observed unemployment is voluntary in the sense that those who are unemployed choose not to take a Job at a wage below their reservation wage or due to some external interference. Classical economics is rooted in the free- raked (self-regulation) concept requires little to no government intervention.

It also allows individuals to act according to their own self interest regarding economic decisions. This ensures economic resources are allocated according to the desires of individuals and businesses in the marketplace. Supporters believe that the economy is able to maintain its-self and is always capable of achieving the natural level of real GAP. While circumstances do occasionally arise that effect the economy, causing it to fall above or below the natural GAP level, self-adjusting mechanisms are believed to exist. 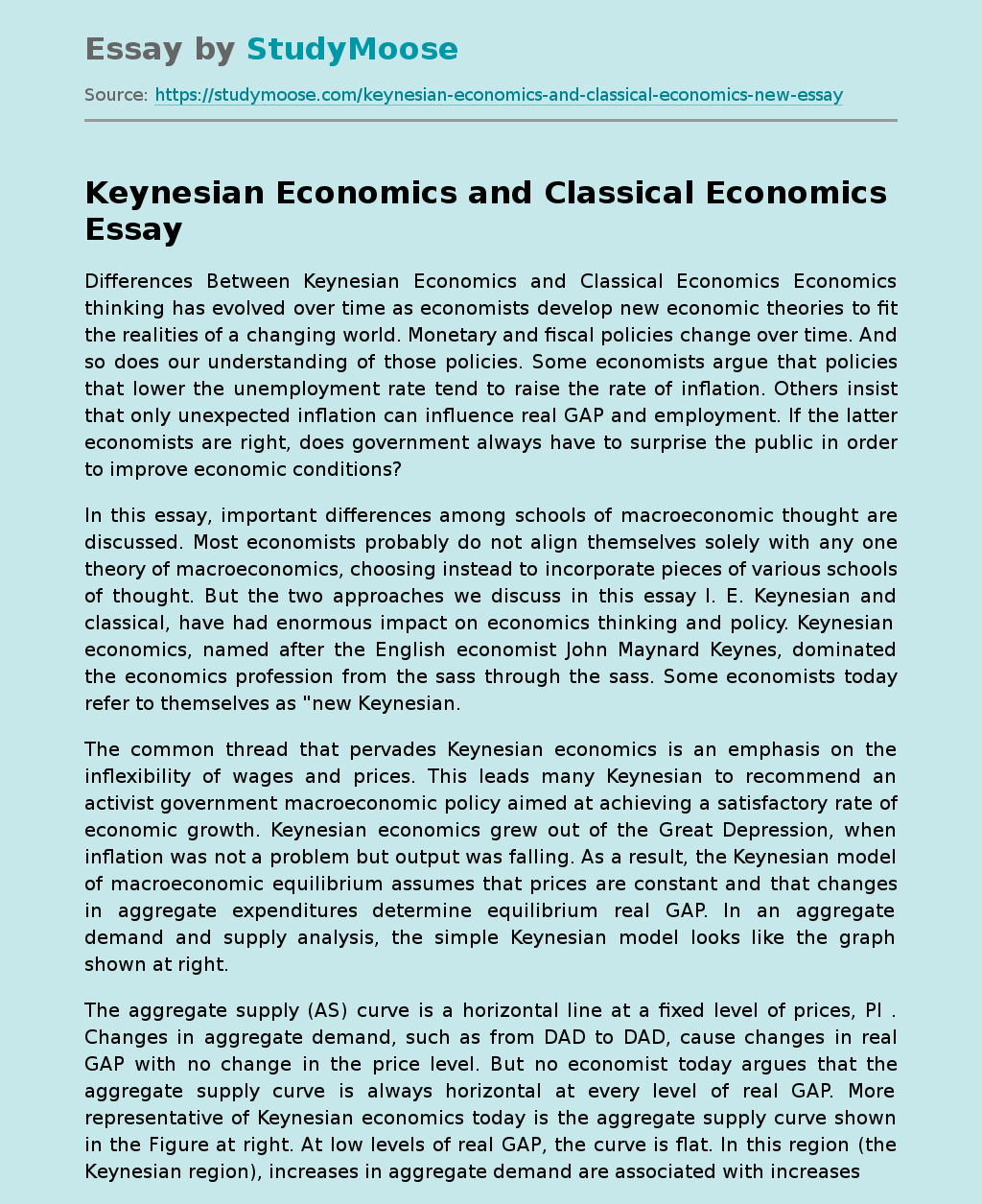