The Treaty of Waitangi: Significance and Controversy

The signing of the Treaty of Waitangi is a very significant event that has led to what New Zealand is today. It gave Europeans and Maoris a common ground to live as one. It is one of the most significant events in New Zealand as it still has an impact on people today, nearly 200 years after the event. This will argue on many topics but will highlight on the unfairness of the Treaty, how it lead to controversy, and how the significance of this event has changed over time.

Don't use plagiarized sources. Get your custom essay on
“ The Treaty of Waitangi: Significance and Controversy ”
Get custom paper
NEW! smart matching with writer

Many argue that the Treaty of Waitangi shows unfairness and doesn’t show equal rights. A lot of this dispute comes from what the Treaty has written on it. William Hobson, also known as Captain Hobson, was responsible for the writing of the Treaty. But was he really fit writing a treaty for a country that currently has close to 5 million people? William Hobson was a Naval Captain who saw action in the Napoleonic Wars and was captured by pirates several times.

Hobson was sent out by Lord Normandy to New Zealand in 1839 with comprehensive instructions in the Colonial office in London as of what was expected of him and the Treaty. In addition to that, on his journey to New Zealand he made a detour to Sydney, New South Wales to visit Governor Gipps where additional information was supplied. These is where he got a majority of his vision for what should be in the Treaty. I struggle to understand how that was all the help that was needed to write this treaty.

This wasn’t a treaty that was to be thrown out or forgotten within a day. It was to be remembered, honoured and was to last hundreds of years. When William Hobson arrived in New Zealand he needed a way to explain to the Maori what they sought. For this, he had the assistance of his secretary, James Freeman and James Busby, the British Resident. On the 5th of February they both collaborated and made the Treaty draft. Busby separated it into 3 articles while Captain Hobson, Henry Williams and Edward Williams were responsible for the translation. Even with the help of James Freeman and James Busby, more time and care should have been taken for such an important thing.

Much debate has occurred over the fairness of the Treaties on both Maoris and Europeans. I believe the Treaty was, in fact, unfair towards Maoris and coincidentally, in favor of the British. The treaty was one-sided in terms of rights and entitlements. The Treaty contains 3 articles; The first article gives the Queen sovereignty (otherwise known as governance on the translated copy), the second article refers to allowing the exercise of chieftainship over their land, villages and prized possessions and the final article promises Maoris the Queen’s protection.

These articles do not leave much freedom or independence for Maori chiefs and individuals. Chiefs that did not sign, like the Waikato chief Te Wherowhero, weren’t prepared to give that up.

Those that did sign agreed to the Queen’s governance over the land, her authority, and the right to deal with them over land transactions. These rights mentioned are unjust and are in favor of Britain. Maori Chiefs that had signed the treaty were encouraged for several reasons. Because of the protection the Queen offered it meant intertribal warfare could be avoided. This meant peace of mind for many tribes. Maoris also wanted employment opportunities, access to western technology and regulated settlement and control of settlers and land sales. These positive outcomes of signing would of hidden the truth of what they were actually agreeing to, the loss of liberty and freedom.

The controversy that is present today originates from the differences between the English and the Maori versions of the Treaty. Most of the Treaty is accurate in its depiction except for two words. Those words are‘Kawanatanga’ and ‘Rangitawara’. These Maori words are mentioned in Article One and Two of the Treaty and provide different meanings than that of the English Treaty. ‘Te kawanatanga katoa’ means the governance over land however it is supposed to represent the idea of sovereignty. Governance refers to control, influence and regulating but sovereignty is something bigger; it is about supreme power. The use of the word governance lead chiefs to believe they retained some control and independence.

They were lead to believe they could have some governorship of their own when really, that wasn’t the case. The use of the word ‘rangitawara’ in the Maori version of the treaty to maintain the authority the Tribes had over their land. Interestingly, the English text emphasises ownership rights and allows land sales to be effected through the Crown. A Ngapuhi chief, Rewa of Kororareka said, “This country is ours…we are the Governor – we, the chiefs of this our father’s land.”

This expresses many of the chiefs disapproval of the Treaty. It’s important because if more had known what was to come and what the Treaty had really meant for them, many less would of signed igniting a completely different set of following events. These words were not translated poorly deliberately but occurred because there wasn’t vocabulary for some words and it was translated in only one evening. Whether this miscommunication was avoidable is not known.

The Treaty of Waitangi has caused many events today. Most of these events are a subject of New Zealand Europeans making up for forgotten promises and keeping true to what the Treaty states. As a result of the difficulty Henry Williams and his son Edward had with creating the translation, ‘Te kawanatanga katoa’ and ‘Te tino rangatiratanga’ did not truely depict what the English copy mentioned. This small but major event lead to the British and Maori agreeing to different accords. The largest outcome of this mistake is the disputes of ownership.

These include ownership of land, lakes, rivers and radio frequencies. Hundreds upon hundreds of pleas have been made for the unfair sales were made to the Waitangi Tribunal for these events and rightfully so. From 1844 to 1864 the Maori went from owning every spec of the South Island to nothing at all. These sales ranged from £150 to £6,000. This is similar to the North Island where Maori are shown loosing close to everything. Land lost was taken through claims, confiscation and sales.

These issues were acknowledged in the later years and the Waitangi Tribunal was established, during Labour Government, in 1975 to investigate them. An example of many showing appreciation and the need for action was during October 1975 in Wellington when as many as 30,000 people stood in the grounds of the Parliment buildings for the end of the historic Maori land march. This included both Pakeha and Maori and was one of New Zealands largest public protests. Since 1975, progress has been made as compensation and land re-ownership has taken place. Attempts are still being made today to make things write.

The significance of this event has changed over time. In fact, it has changed ever since the creation of the Treaty. Maori have always had a constant respect for the Treaty. In 1840, Maoris thought the Treaty was the start to a new beginning. It also meant they had access to western technology; access to things they would not have heard of before. There were many benefits to having the Europeans here, and a good relationship with them meant more privileges.

After several years of unfaithful actions done by the British, their relationship with them might of changed, however, their respect for the Treaty maintained the same. Battles, court systems, and laws. Despite all of these negative influences on the Maori they still wanted what was said on the Treaty to be adhered to. Hone Heke did not cut down the flag pole at the British settlement Kororareke, now known as Russell, because of the what the Treaty said. He did it because of how the British responded with disrespect and dishonesty.

The Maori-King movement (1860s), the Raonga movement (1918) and various groups are many examples of drives to insist the the treat be respected. To this day Maoris still honour the Treaty, bringing up issues and problems but never showing hatred at it, as it brought us together. Change has been shown by Pakehas. In the short years after the signing of the Treaty, the British had abided to their pledge. In the first decades after the signing this changed.

As the population of European settlers was on the rise, people felt it was not relevant or necessary to comply with. Rules were broken, land was confiscated, the Treaty was almost forgotten. It wasn’t until the 1970’s that the Labour government started to show interest. They recognised the Treaty for what it was and established the Waitangi Tribunal in 1975. Many people followed the movement. In following years the signing of the Treaty of Waitangi was commemorated and made a national holiday. The country is still divided on many things, such as ownership of the seabed and foreshore, but it didn’t matter if you were a Maori or Pakeha, people knew that we were New Zealanders and it was the day to celebrate it.

The Treaty of Waitangi is one of New Zealand’s most significant events. It is what created this place as it brought two nations together to make us who we are today, New Zealanders. The signing of the Treaty has led to so many other events. It created disputes, conflicts, wars and had changed both Maori and British. Whether it be who wrote the Treaty of Waitangi, it’s controversial translation, the events after the signing or how its viewed upon today, these things have all had an enormous impact and effect on our lives.

The Treaty of Waitangi: Significance and Controversy. (2016, Apr 09). Retrieved from https://studymoose.com/the-treaty-of-waitangi-significance-and-controversy-essay 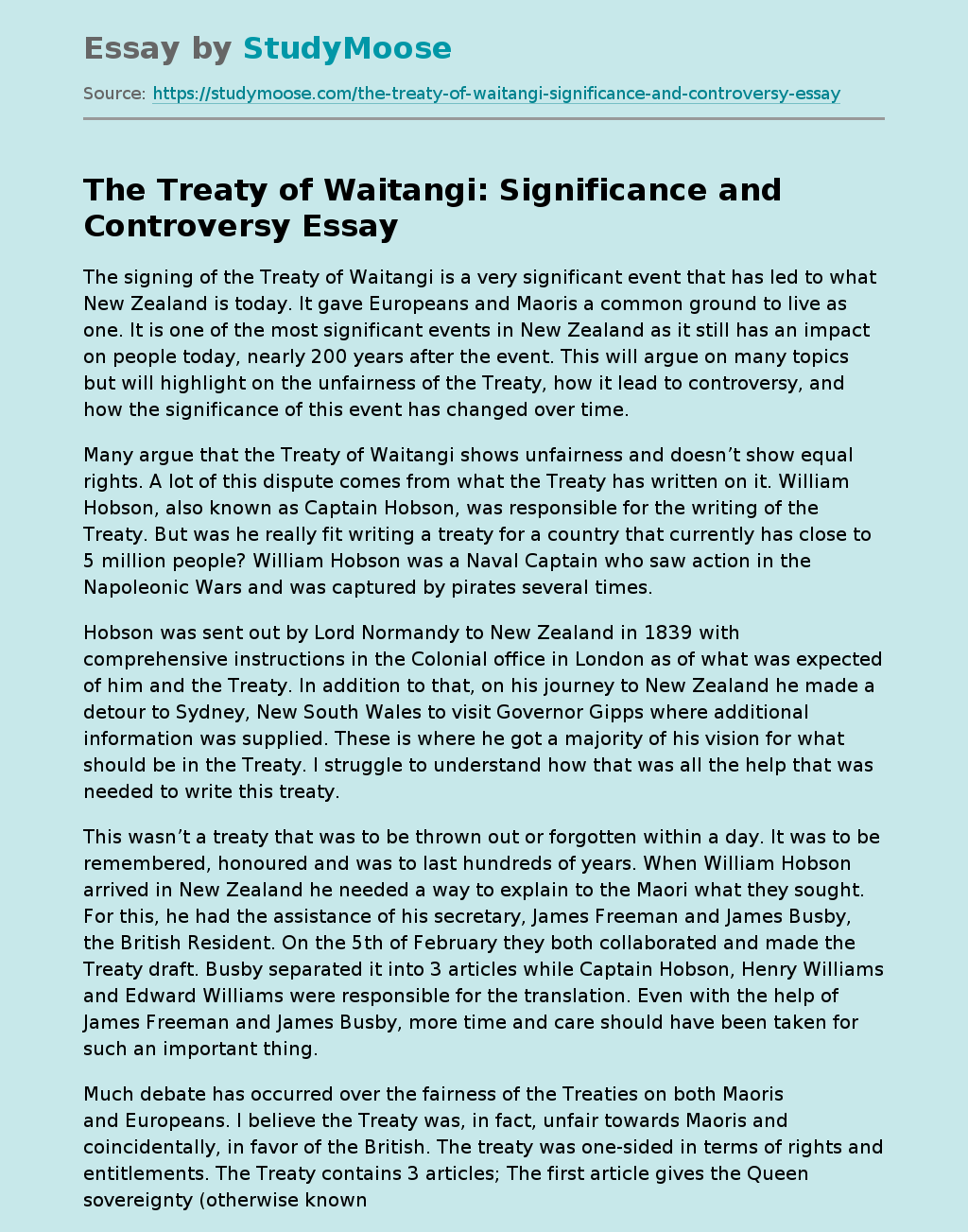