Why did the United States Reject the Treaty of Versailles?

The First World War ended with the cessation of hostilities following the signing of an armistice on November 11, 1918 between Germany and the Allies made up primarily of the “Big Four” – Great Britain, France, Italy and the United States which belatedly entered the war in 1917 following German provocations. The following year saw the “Big Four” meet again in Versailles, France to forge a treaty that entailed how it would deal with Germany and determine the course of world events thereafter that came to be known as the Treaty of Versailles.

Don't use plagiarized sources. Get your custom essay on
“ Why did the United States Reject the Treaty of Versailles? ”
Get custom paper
NEW! smart matching with writer

The gist of the treaty stiuplates the terms and conditions to be imposed on Germany which were harsh ranging from cession of its overseas possessions and admitting guilt in starting the war. Needless to say, these were terms the German people found hard to accept. On the distaff side of the treaty, it also called for the right of self-determination of sovereign states and for the creation of a world body that would serve as the guarantor and protector of world peace.

The latter part was based on the “Fourteen Points” of US President Woodrow Wilson.

Although he was the head of state, it was the United States Senate that had the final say on the ratification or approval of the treaty to make it binding for the United States to honor and adhere to, and unltimately they rejected it. At this point, one must wonder why the US Senate rejected a treaty which appeared to look good (on paper) and drawn up by their own head of state.

The answer lay in the provisions stipulated in the treaty which made members of the Senate, especially the Republicans (Wilson was a Democrat) reservations.

In essence, they did not like the treaty for several reasons. First and foremost, the Senate believed that the US had already fulfilled its mission in “making the world safe for democracy” as Wilson said when they declared war two years ago. The armistice signified the end of hostilities and they felt it was now time to return to normalcy. In this case a return to isolationism where the United States would once again mind its own business and stay away from the affairs of other nations (Andelman, 2008, 284-285).

They were particularly uncomfortable with the thought of joining a world body like the League of Nations, as Wilson proposed. Wilson felt that the United States could not escape its responsibility as a member of the community of nations and must also play an active role in helping ensure order given its then growing stature as a world power. The Senate, believing they reflected the general will of the American people, viewed it differently. The war resulted in the deaths of millions of their own soldiers who died in the battlefields of Europe.

The war was won and peace was attained yet they felt they paid a high price for it in the blood and lives of their own citizens inhaving to “clean up the mess” started by the Europeans and they believed this war was a precedent of what was to come in the future where the US would be called upon to address these crises and pay for it (reluctantly) with the lives of their people and this was something people back then found very hard to accept (Andelman, 2008, 290).

This was further reinforced when seeing the other provisions where they found the above-mentioned conditions dealing with Germany too harsh, a sign of vindictiveness on the part of the other parties involved. The other parties in the conference had their own agendas too and managed to have their way, thereby watering down Wilson’s Fourteen Points. This was also another reason why they felt the US did not want any part of this wholly European affair for their agendas tend to go against the democratic principles America adheres to.

Although they won the war, several of them felt it was not worth sacrificing American lives and therefore rejected the treaty despite Wilson’s vigorous efforts to “sell” it to the American people which resulted in being felled by a stroke (Andelman, 2008, 286). As an epilogue, it turned out Wilson was proven right. America’s exclusion did not guarantee world peace. The same cause that started the last war emerged again (extreme nationaism) and once again, the US was drawn into a war whether it wanted to or not.

Nevertheless, they prevailed again but this time, they learned their lesson and accepted their responsibility in keeping the peace. The result was the creation of the United Nations, the very thing Wilson envisioned and on more than one occasion after 1919, the US has been involved in numerous interventions to preserve democracy and keeping the peace from Korea to Kosovo. It would appear that America has finally come to terms with its responsibility as a world power and as a member of the international community.

Why did the United States Reject the Treaty of Versailles?. (2017, Feb 21). Retrieved from https://studymoose.com/why-did-the-united-states-reject-the-treaty-of-versailles-essay 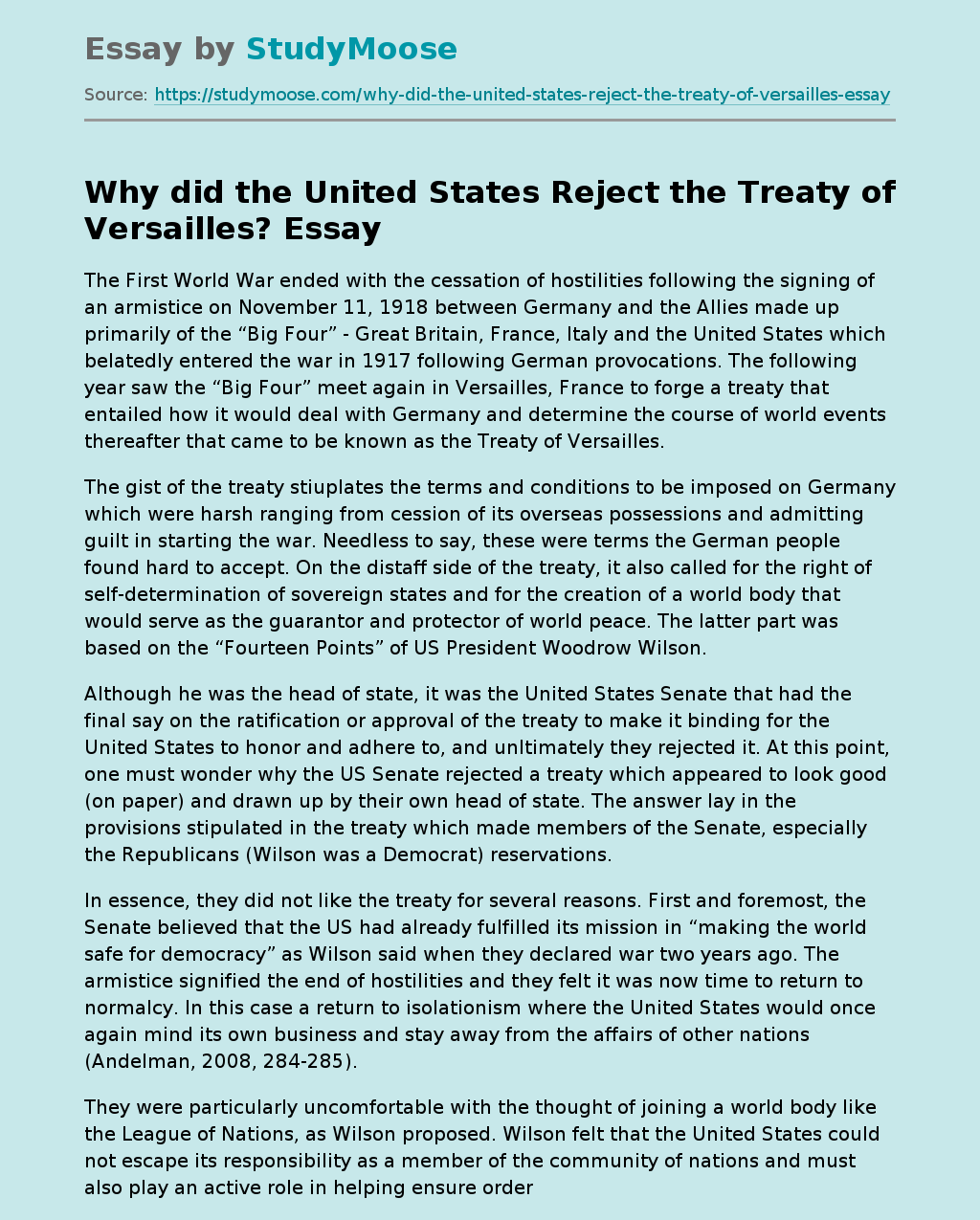