How far do you agree with the statement "The Treaty of Versailles Was Unfair for Germany"?

Treaty of Brest-Litovsk When Russia lost the war against Germany, Germany forced Russia to sign the treaty of Bvest-Litovsk.

Don't use plagiarized sources. Get your custom essay on
“ How far do you agree with the statement “The Treaty of Versailles Was Unfair for Germany”? ”
Get custom paper
NEW! smart matching with writer

In the treaty of Brest-Litovsk, Germany did not think about how Russian civilians would think and treated Russia harshly. Now, that Germany lost the war, and they have to signed the treaty of Versailles they complained that the treaty was too harsh for them.

The armistice signed by Germany

They knew about it and they signed it even though those were just probabilities, they knew that those might happen, so if they thought that the treaty of Versailles unfair they should not have signed the armistice and carry on fighting.

It was not wrong to take Alsasce and Lorraine because it was originally part of France.

Three leaders different aims
The big three had a different perspective on how to treat Germany. Like, Clemenceau wanted Germany to be punished harshly to the point that Germany could not attack France again, Lloyd George did not want to punish Germany harshly not to the point where Britain could not trade with Germany and France would get too much power in Europe, Meanwhile Wilson did not want Germany to be punished harshly that they could feel bitter and resentment because it could lead to another war. But, they somehow could agree on all the terms covered in the treaty which means during that time that was the fairest terms that they could give to Germany. And all the leaders also listened to the public opinion about the treaty and many people that time (the winning civilians side) thought that the treaty was fair.

Clause 231 about War Guilt
The war guilt was on Germany. Its mean that Germany was blamed for starting the war. It was wrong to put the blame on Germany because it was not only Germany who started the war but also other countries that were hungry of power. One of the main causes was imperialism; many countries in Europe were actually hungry of power and money and too busy creating empires around the world.

Disamamerments
Germany was forced to disarm. The army was limited to 100,000 and no conscription. Tanks were banned and only had 6 battleships. Germany is a big country if the army was reduced how would they protect their countries if there were countries attacking them. And also the other countries did not disarm, the only country who was disarming was Germany so how would they expect that no other country would attack them if other countries still have weapons and war stuff and they only have a small amount of army that were not enough to protect the country and six battleships.

Anchluss was forbidden
Germany was prohibited to unite or in other word make a contact with Austria. It was unfair because Austria was their only ally, and if something happens in Germany, Austria would be the only country who most likely to help Germany, People in Austria and Germany that time speak the same language, share the same tradition and ethnics and also other countries still have their allies it was unfair for them to be prohibited to unite while others can.

Reparations
The idea of reparation was not totally wrong but the reparation actually hurt ordinary German civilians who had nothing to do with the war. Germany was also in the war, some of the parts of Germany was also destroyed and Germany economy also not in a good state, they also need to build up after the war. France should know about this since some parts in France e.g Verdun was also destroyed after the war. And instead of punishing the leaders who decided to go to the war they punished Germany civilians who had nothing to do with the war. Lost of territories

Germany was forbidden to enter the League of Nations The league of nation was set after the war, it was set to stop another war happening again but one of the main keys of the war was not allowed to join the league. It made many Germans felt bitter and resentment to be isolated and treated like a naughty child.

Not all of the terms were unfair some of the terms were actually fair. The idea of reparation was not totally wrong. The allies win, and they need money to build up after the war, to pay their debt to the USA and they had Germany who lost the war. Germany also did that to other countries when they were winning but the amount of money and who were punished were wrong. Instead of punishing the ‘criminal’ behind the war, the reparation hurts Germans civilians who were not guilty. The idea of war guilt was completely wrong. It was wrong for them to make the losing side was the one who blamed for the war. The war would never happen if countries in Europe never acted aggressively for imperialism.

If Austria never colonized Serbia, the Archduke would never be murdered by an assassin and the countries who were ‘allies’ with both countries would never declare war against each other. The setting up of League of Nation was a good idea but if they did not allow the main player who were in the war, the League is completely pointless. How could they make sure that League of Nation would succeed if Germany was not allowed to join at all and actually the League of Nation was controlled by Britain and France so therefore the ex-colonized Germany countries did not get self determination but were colonized by Britain and France. So therefore, the Treaty of Versailles was partially unfair for the Germany.

How far do you agree with the statement "The Treaty of Versailles Was Unfair for Germany"?. (2016, May 08). Retrieved from https://studymoose.com/how-far-do-you-agree-with-the-statement-the-treaty-of-versailles-was-unfair-for-germany-essay 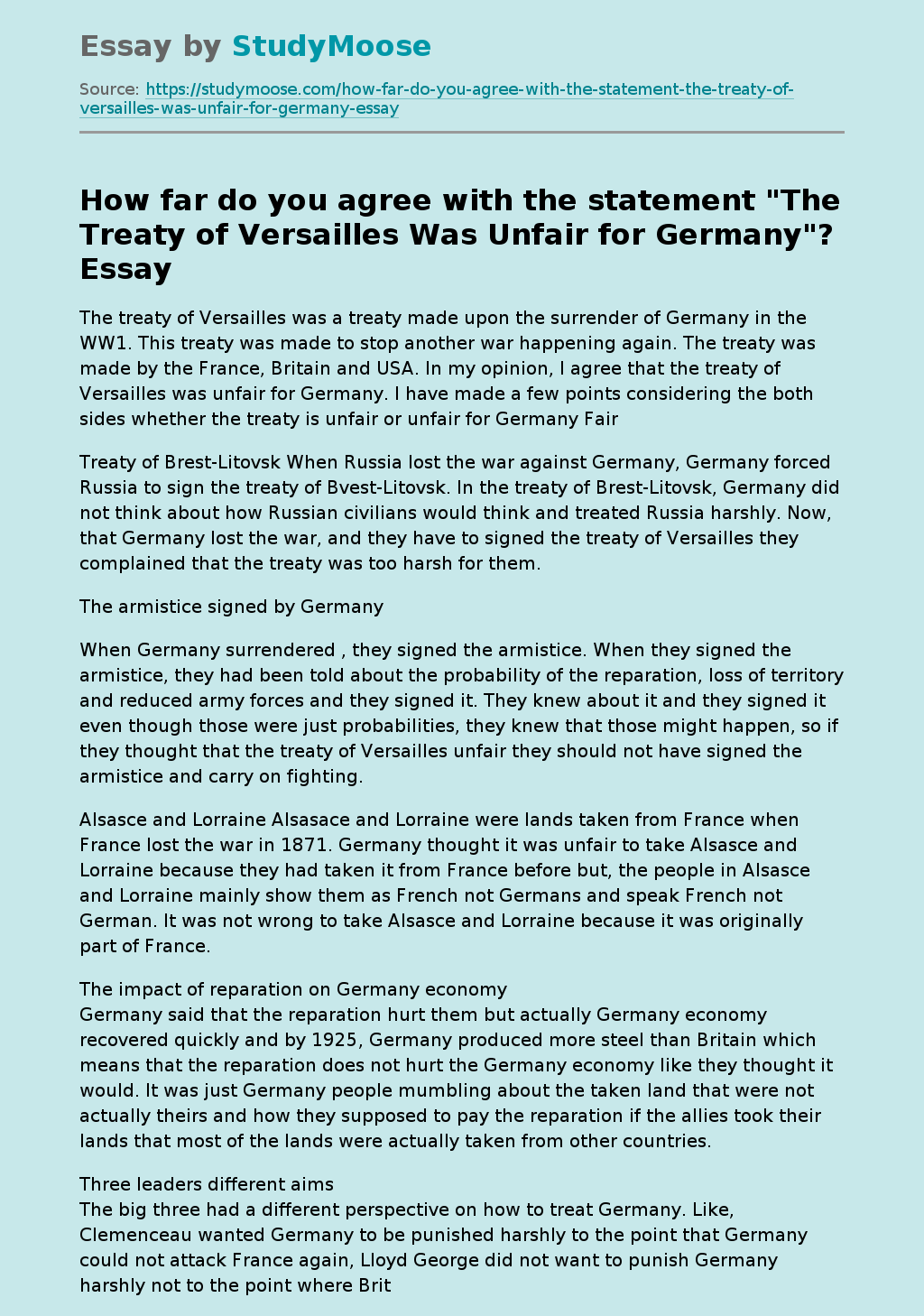