Imagine waking up and find the media has scorned your age group as big babies yet again. Imagine being rejected in your job interview just for being a millennial, or not being taken seriously in your life- at least not until you get older—how would you feel? Discouraged? Depressed? These feeling might be just your imagination, but in reality, millennials are suffering from them.

Many media misrepresentation exists in our society, and one victim of it is the millennials.

Don't use plagiarized sources. Get your custom essay on
“ Millennial Generation ”
Get custom paper
NEW! smart matching with writer

Millennials are a group of people born around the year 2000, they are frequently presented on the media as selfish and entitled youngsters that demand everything to go their way.

In one issue of the 2017 Sunday Talk Show, Adia Rodrigue who is the editor in chief of the Toronto Sun, commented millennials in a similar way.

In the talk, Adia Rodrigue stated that millennials should move on and stop running to their safe hole when someone says something they don’t agree with.

Using simple but very relevant wording, the phrase ‘safe hole’ in Adia’s speech not only made herself down-to earth, but also distributed a tone of sarcasm toward millennial’s behavior, rendering her main idea of millennials possessing a low tolerance of different opinions and consider eluding from different opinions a symptom of selfishness.

Adia Rodrigue enforced her argument by adopting concession. She acknowledged an opposing argument by admitting the inequity of the debt burden and tax amount millennials are facing, but soon accompanied her concession with a refutation of: “Every other generation has also faced many problems and challenges, some in case war in notation.

” After her refutation, Adia unpacked her claim by stating that the difficulties millennials are facing are “reality” that every generations have been through before, and instead of being entitled, blaming everybody else and expecting to have everything thrown at them, millennials need to get over it.

A times magazine cover story written by Joel Stein, an American journalist on May 21th, 2013, criticized millennials of their selfishness and entitlement using various persuasive techniques.

Joel Stein applied logos to his argument. Using clarified statistic of test results from different time period, Stein exerted techniques of contrast to compare how the millennials scored on creativity and empathy from 1966 to 2000. The comparison Stein made provided statistical evidence of trend of millennial’s creativity and empathy through various years. This contributed in the persuasiveness of Stein’s arguments addressing millennials as selfish people who lack empathy and the tolerance for different ideas.

Stein then intensified his claim by implementing quotes from a qualified authority-Sean Lyons, the co-editor of another millennial-relevant article. By referring to Sean Lyons’s opinion that entitled millennials are more likely to possess unmet expectations to their careers, Stein indicated to his audience about the consequences of over-entitlement. Citation of Sean Lyon’s comment amplified credibility to Stein’s thesis that millennials are over-entitled and will soon be disappointed when realizing they are not special.

Media plays a crucial role in framing the mindsets of people towards issues. The Sunday Talk Show and the Times magazine are both very influential media, but their representation of millennials were grown from generation stereotype and sensationalism. Deliberately shaped misrepresentations jeopardizes the public impression of millennials, encouraging hate and suspicion in millennials and creates an unfair media image of selfish, entitled millennials.

The morality and responsibility of a media should be fundamental of your reporting. If you are misrepresenting millennials for attention, fame, or fortune, I strongly suggest you to stop doing so. When you apply your view objectively and free of prejudice, fortune and fame will spontaneously follow. Being a responsible media, you should report facts objectively rather than creating facts. Instead of advertising one-sided opinions and exaggerating judgments, you should balance your interest on both positive and negative side of millennials and produce articles in an honest and sincere position.

As people age, they generally processes less growing mind sets, they are less open and less connected to how the world is changing. Indeed there is much to be said for the value of life experience, it is undeniable that the millennial see the world in complete different ways that the older generations simply cannot. Millennials possess irreplaceable insight. If you want to see how the world is evolving, it will be helpful to listen to the millennials who are seeing it from a fresh perspective.

Unequal representation of millennials may lead to serious consequences that we could have avoided.

Misrepresentation can also be internalised in millennials, “creating a sense of shame and presenting barriers to participating in the mainstream society” Says Melissa Stoneham. “This perpetuates the cycle of disadvantage.” (Stoneham, 2014) In long term, media misrepresentation will result in severe consequences where talented and motivated young people lack opportunities to express and contribute. It will eventually become a ‘glass ceiling’ that prevents millennials from achieving more and reaching their full potentials as leaders, innovators and change makers.

On the contrary of selfish and entitled, millennials are actually considered the most charitable generation ever. Black baud’s Next generation of American Giving Report found that the average millennial donates nearly 500 dollars for charity each year. 84 percent of millennials make annual charitable donations, while 70 percent of them volunteer their time and talents to contribute to others. (Blackbaud Institute for Philanthropic Impact, 2018)

You possesses the power to trigger a change. It is never too late amend your misrepresentation. Start by reducing exaggeration and sensationalism in your article, it will have an evident effect in relieving hate and suspicion in millennials. Be a positive mouth piece of millennials, focus on their achievements and report on outstanding members among them. Reporting positively will eventually change the mindsets of people towards millennials. And above all, to radically cure this misrepresentation, communication with millennials are important, direct engagement with millennials ultimately enables you to represent them in an accurate and fair perspective.

It is a world without prejudice we are working to, let it start with you. 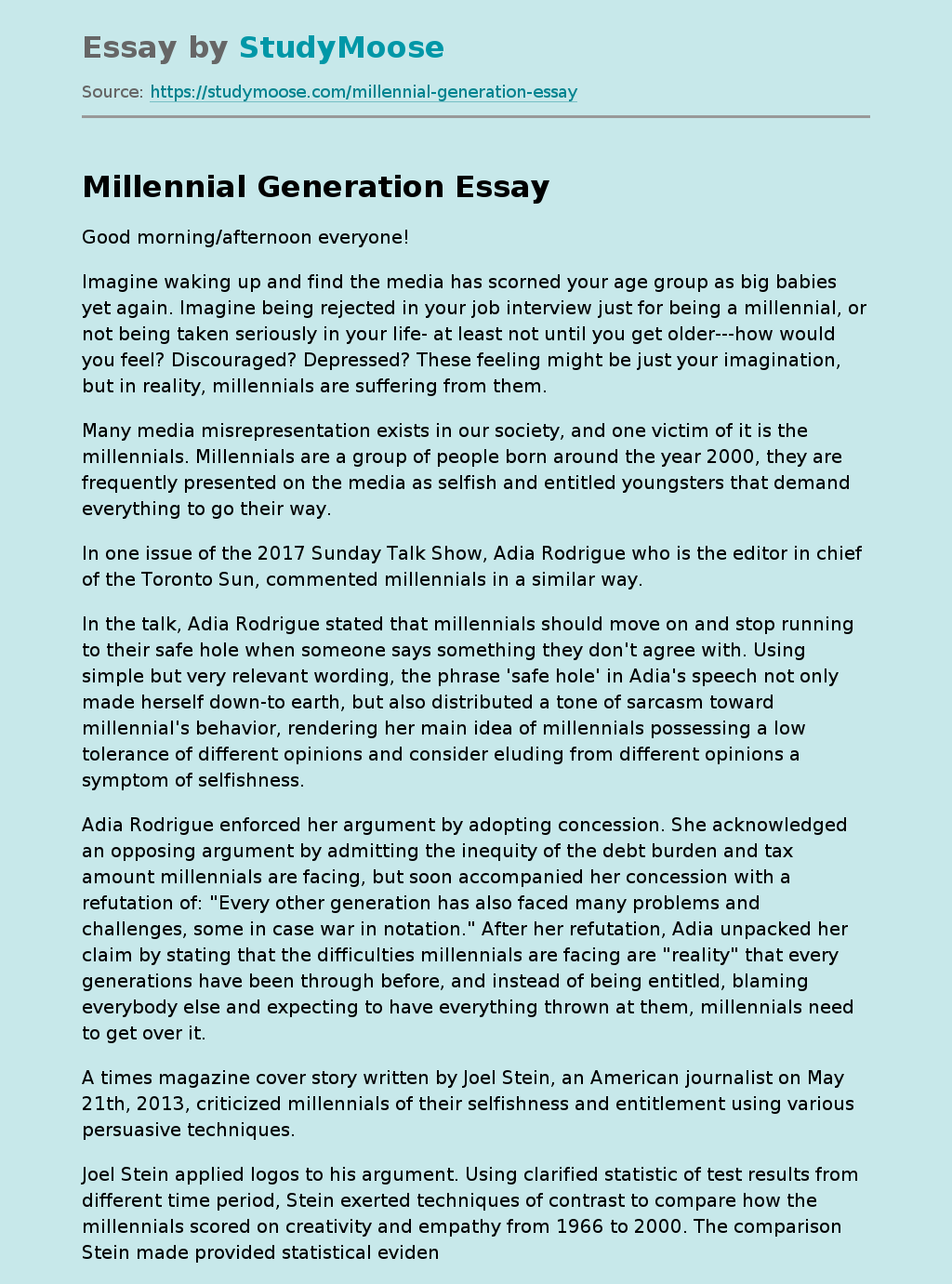