A Rhetoric Analysis of Millennials: The Me Me Me Generation, an Article Published on TIME Magazine

A rhetoric analysis of an article, in primal cases often are non-fiction, aims to break down the core messages and highlights them into parts that can explain how they work together and how they are related to bringing out the overall goal of the author. Some of the highlights may aim to persuade and inform the audience or purely for entertainment purposes. The essay is a rhetoric analysis of the article Millennials: The Me Me Me Generation in times magazine by the author Joel Stein.

Don't use plagiarized sources. Get your custom essay on
“ A Rhetoric Analysis of Millennials: The Me Me Me Generation, an Article Published on TIME Magazine ”
Get custom paper
NEW! smart matching with writer

The essay aims to use some the rhetoric goals basing them on the use of Aristotelian elements that are respectively Ethos, Pathos, and Logos as it has been deployed by the author to achieve the overall goal of the article.

The article Millennials: The Me Me Me Generation is talking about the Millennials and how the society perceives them. The millennial is a group of the social generation that were born between the years 1980s to the beginning of the millennium in 2000.

These individuals are also called to as Generation Y. The group is made up of mostly teenagers and adults still in their 20s as the author puts it. They make up about 80 million of the American population making them the biggest age group in the history of the United States. The author tries to explain the life and connection that the millennial has with each other, at the same time the article also compares and contrast the generation y with other generations like Generation X, which was the previous before the Millennials.

The article by Joel is ideally a quick peek at the life of the Millennials and how the world sees in them in term so their future there present and how they came to be. The essay is going to analyse the article in three parts mainly, the ethos, the pathos, and the logos as the writer applied them throughout the essay.

Ethos in an article is an appeal to the ethical side of the audience by the writer. It seeks to convince, inform or entertain the audience about some of the subjects and objectives of the essay through the character and the credibility of the persuader (Banev, 104-107). The writer appeal to ethos may be a part where the writer tries to pass the point across based on his or her credibility, this may not be necessarily the chief author of the article but another second or third subject might be introduced. The author of the article Millennials: The Me Me Me Generation has not fallen short of the skill as it is observed in the read. The introductory paragraph has some elements that try to emphasize on the credibility of the author as the means of providing the information in the article. The author compares himself with the older generation in relation to how the refer to the millennial throughout history. The older generation is known for calling its younger siblings lazy, very entitled, have a greater sense of self and are shallow in their thinking. However, unlike the older Generations, the author has studied the ages, he has the statistics, and he also has a quote from some of the respected academic institutions. “Unlike my parents and their parents and their great grandparents, I have proof” quipped the Joel, the author. (Joel, 1)

The author was also keen to introduce others subject as a means of proving the credibility of the subject of his article, adding a second subject and emphasizing the credibility as he did in the first paragraph of the article adds more to the primary objective. Roy Baumeister is a psychology professor in the Florida state university who helps in emphasizing how the Millennials have a great self-esteem that is good at getting a job but cannot maintain it, same to relationships calling it an “honest mistake.” (Joel, 1)

An author uses pathos as a way of persuasive writing through their appeal to the emotions of the audience. The argument is created based on emotions to create or illicit an emotional response (Banev, 104-107). The use of pathos by Joel is clearly evident in some of the paragraphs as he tries to put his points across. The author refers to the generation as threatening and exciting at the same time because of the revolution on social change that was brought about by baby boomers, as used in the article by the author threatening and exciting are purely meant to elicit an emotional response to the subject matter. He also goes ahead to elaborate to the point of other millennial selfishness in technology through the way that they use it. Millennial have an average of 85 pictures of themselves and walk with them in their phones, the article states. The author says that Millennials live in the age of the quantified self, where the record every step they take in FitBit and try to remember their whereabouts in apps like Place Me. He refers to the generation as the one whereby Walt Whitman would wonder if they should try singing a song about someone else. That will evoke an emotional response from the audience.

Logos is the wildly used form of persuasion and getting the objective of the author across to his audience. Logos is the author’s technique that tries to appeal to logic. Logos tries to persuade or inform through the use of reason and sometimes it may be accompanied by facts (Banev, 104-107). The author has more than enough fact to appeal to logic in the article. In the second paragraph, after he tells of his proof, he goes ahead and provides what he termed as “cold, hard data.” In the cold hard data, he quips of the high personality of the Millennials that is threefold higher than of the older generations. More college students score higher in term of narcissism scale than those that were born in the 80s, and they are 40% more likely to look for promotions than the older generation regardless of their performance. Millennials did not grow up using their heads to do the complicated calculation. This appeals to the logic sense as the writer goes ahead to mention the fact that the Millennials generation is very dependent on computers to handle complex calculations. He argues how the generation have a lot of similarities even when they exist the world apart. Joel uses the comparison of China and the United States.

It is logic understanding that the flow of information through globalization has allowed the exporting of cultures through the world in a speedy manner. The access to internet and urbanization has led Asian teenagers and adults in their twenties to grow up with the same self-confidence as you would find in American kids, considering the strict upbringing in Asian family settings. (Joel, 1)

A Rhetoric Analysis of Millennials: The Me Me Me Generation, an Article Published on TIME Magazine. (2021, Sep 10). Retrieved from https://studymoose.com/a-rhetoric-analysis-of-millennials-the-me-me-me-generation-an-article-published-on-time-magazine-essay 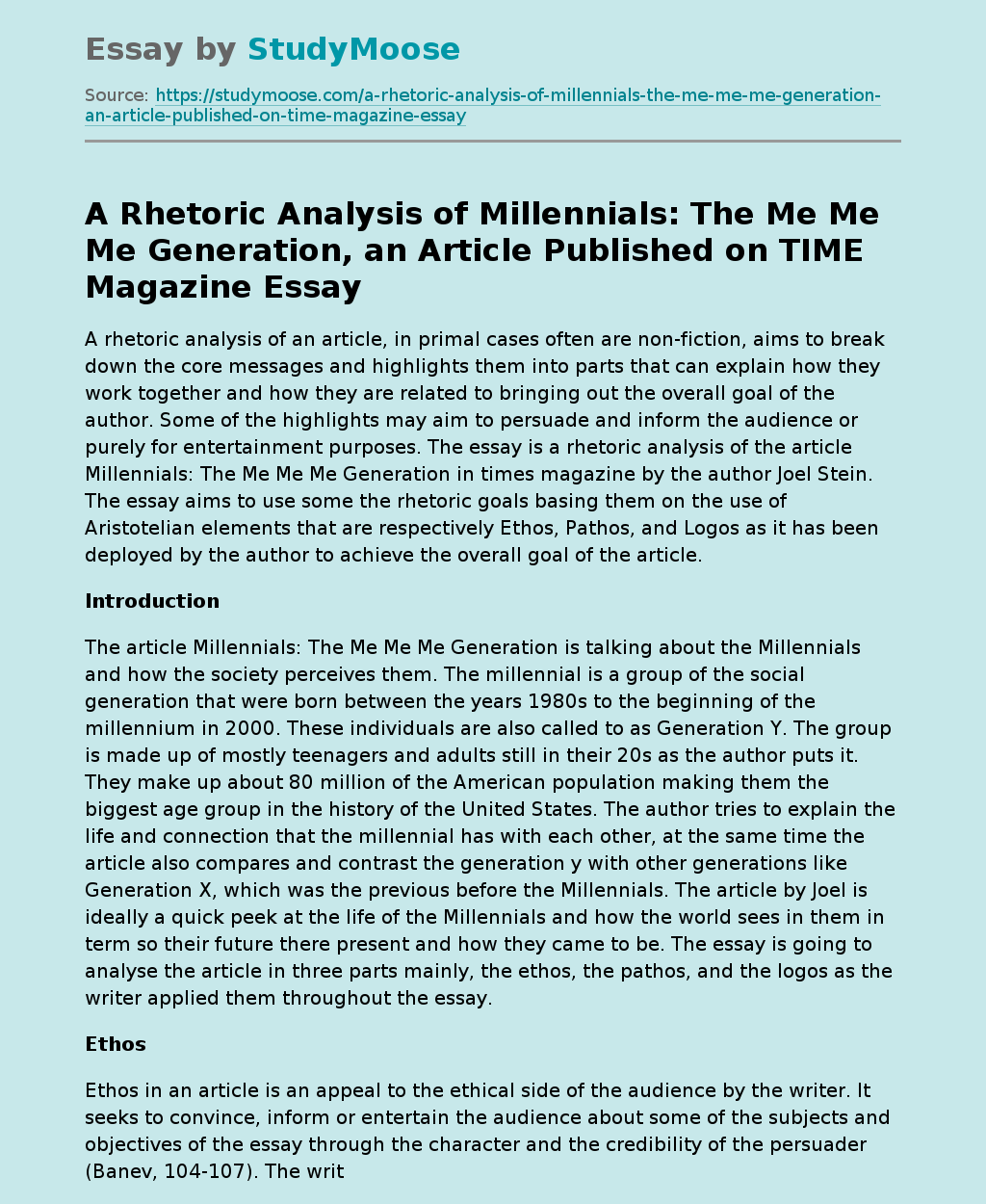