For the modern American president, the ability to be an effective public speaker can make all the difference in terms of the perception of the intelligence of any given commander-in-chief of the most powerful nation on earth. The value of this talent is also highly desirable among employers in the private sector as well. Politically speaking, the skill of orators has been seen as essential in written accounts dating back to days of the ancient Greeks, Romans and Egyptians (Lucas, 2008).

It is with the inaugural addresses of two of America’s most beloved modern presidents in mind that this paper will discuss rhetoric, speaker’s purpose, and personal opinions as well.

Don't use plagiarized sources. Get your custom essay on
“ Presidential Rhetoric The Speech Analysis ”
Get custom paper
NEW! smart matching with writer

President Barack Obama Inaugural Address: January 20th, 2009 To begin, it is possible to find both the most recent inaugural address and an address from one of the 21st century’s most popular presidents in one. On January 20, 2009, President Barack Obama delivered an inaugural speech to a nation on the brink of financial chaos, facing threats from rogue nations and terrorist groups, and dealing with moral decay from all sides.

Rhetorically, there was an attempt in this speech to sell the American people on undertaking the massive amount of work that lie ahead in helping the nation recover from its many problems and issues, but the absence of specific examples of ways this could be accomplished took away from the potency of the rhetoric. Because of both the audience and the situation, Obama spoke of a “crisis” facing America, while still reassuring the average American that brighter days would eventually prevail.

Nearly half a century before president Obama delivered his inaugural speech to the American people and indeed the entire world, President John F. Kennedy did the exact same thing, but in closer examination, was more effective in doing so. First, a look at the rhetoric of Kennedy in his speech; simply put, Kennedy was attempting to sell the American people on the idea that for all of the challenges that America faced at the time of his inauguration- the threat and rivalry of communism, a transition of power from one generation to the next, and the protection of American interests across the globe.

Kennedy achieved his rhetorical objective with the use of power phrases such as “ask not what America will do for you, but what together we can do for the freedom of man” and “the energy, the faith, the devotion which we bring to this endeavor will light our country and all who serve it”. These types of words were chosen given the fact that the target audience for the speech would be the working generation of Americans, in whose hands the future of the nation was placed with the occasion of Kennedy’s election.

Overall, there is compelling evidence to fairly argue that the purpose of the speech- to revive, protect and rebuild America- was accomplished. A Comparison of the Speakers Generally speaking, both the inaugural address of Obama and that of Kennedy are inspiring in their own ways. Obama used words such as “hope”, “promise” and “bold and swift action” to reassure Americans that there were possible remedies for the economic, social and military problems facing the nation, delivered by a man who exudes confidence, youth and power.

While the same can be said of Kennedy’s delivery and choice of powerful words, the speech of Kennedy appears to be of a higher caliber, for while Obama speaks in generalities and platitudes, Kennedy lays out specific tasks to complete, such as space exploration, protection from communist oppression, and the like. In the final analysis, it would appear that public speaking must have style as well as substance. An Opinion on American History Taking into account the inaugural addresses of both Obama and Kennedy, it is possible to make a personal assessment of which time in American history the researcher would like to be a part.

Judging strictly from the inaugural addresses, it would seem that the time of the Kennedy presidency would be the preferable time in which to live for a variety of reasons. First, the very presence of Kennedy as a public figure was quite inspiring based on the youth, vigor and power he portrayed, giving weight to the assertion that the messenger is often as important as the message itself (Lucas, 2008). This is not to say that the message was not inspiring as well, for the challenge posed for Americans to embark on new endeavors and lead the nation in an exciting new direction are convincing reasons to embrace this period in American history.

Conclusion As this research has shown, presidential inaugural addresses have inspired Americans for generations, reflecting a tradition in public speaking which is thousands of years old. Moreover, in the hands of a skilled orator, the right speech can quite literally change history. Therefore, in conclusion, what should be taken away from this paper is the importance of speeches as well as the speakers who deliver them. Works Cited Lucas, S. E. (2008). The Art of Public Speaking, 10th Edition. New York: McGraw-Hill. 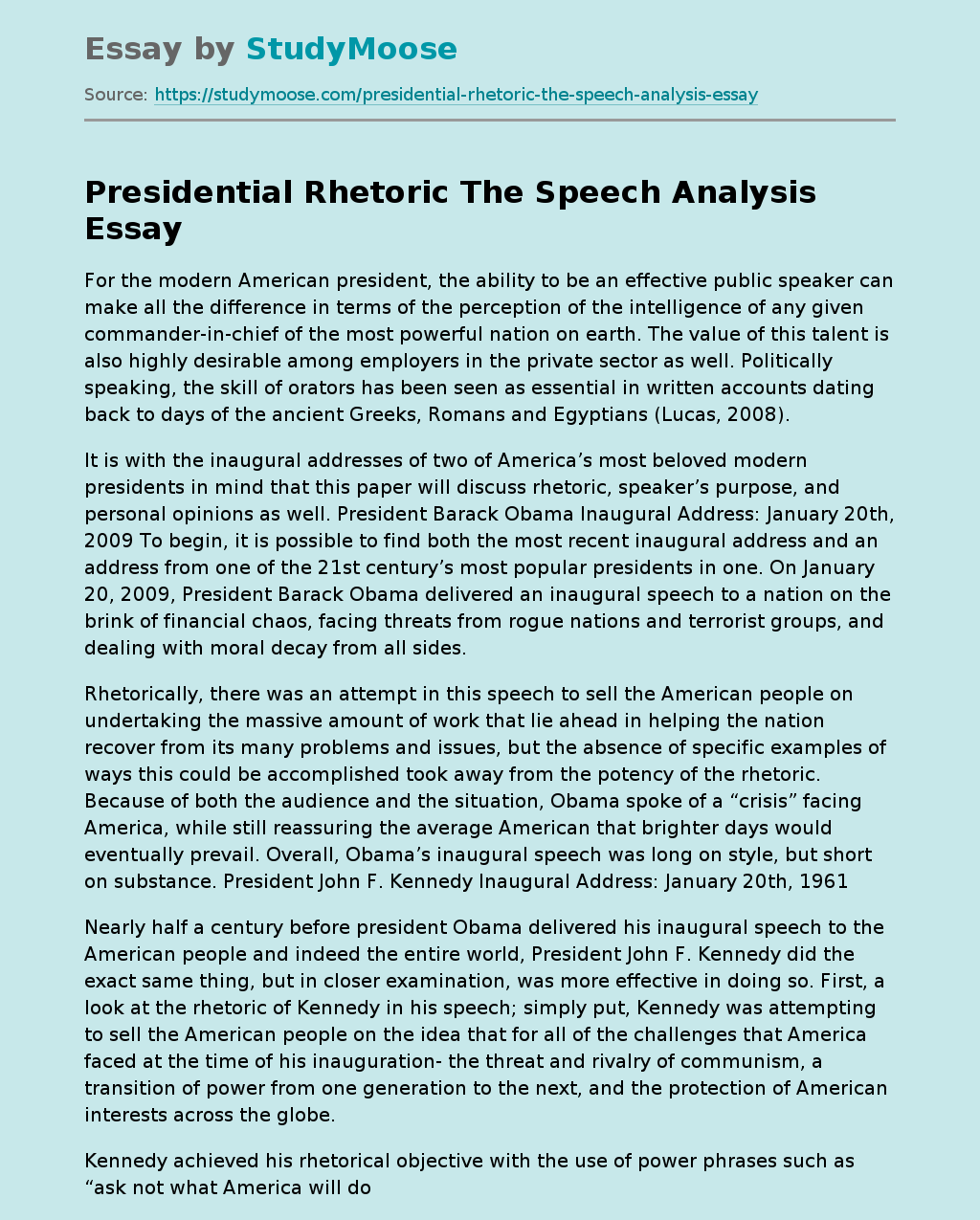