Parliamentary and Presidential democracies are forms of government that similar in some respects and differ in others. The Parliamentary system like the Presidential is divided into three separate arms of Government, the Legislature, Executive and the Judiciary. Both democracies have a bicameral legislature, often referred to as the House of Representative and the Senate. The House of Representative is elected and the Senate is appointed by the Head of State on the advice of the Prime Minister in a Parliamentary type while both houses are elected by the people in the Presidential system.

Don't use plagiarized sources. Get your custom essay on
“ Compare and Contrast Parliamentary ”
Get custom paper
NEW! smart matching with writer

In the Parliamentary System, the Head of Government, referred to as the Prime Minister, is appointed by a vote of confidence from the House of Representative firstly along with the Attorney General and subsequently followed by the members of Cabinet. In a Parliamentary Democracy there is also a figurative head of state, normally the Queen or an appointed Governor General. In the Presidential System, the President who is separately elected by the people is both the Head of State and Head of Government.

Presidents serve a fixed term and may not be removed except for cases where he does something illegal; while in Parliament, a Prime Minister may be removed by a vote of no confidence by his executive members or he may call an early election at any time and dissolve the house.

Although the three branches exist in both types of government, it is evident that power is fused between the Executive and Legislature in the Parliamentary type.

The Presidential System is otherwise well known for the separation of the Executive and the Legislative Agencies, with the President nominating and appointing his executive team of which no members of the elected legislature can be a member thereof. A Parliamentary Legislature makes and passes laws easily by virtue of always having a majority in the House. In the Presidential System, the Legislature and the Executives are able to create laws but must have a two thirds vote of the Legislature. The President also had the right to veto laws. Overall, the Caribbean should adapt to the Presidential Democratic System. Although it may seem very expensive to fund such type of government, it may cost less in the long term. The check and balance that a presidential system offers allows for less corruption and Executives to be held accountable of their actions. Policies and laws would be more accurate and better evaluated having two separate Agencies in review of such nature. The Presidential system allows for more transparency which is one of the ultimate objectives of a democracy. References

This means they have two elections. A president can only serve two four years term and is answerable to the people. In the Parliamentary Democracy there is an Executive power but is interdependent on the Legislation. The Prime Minister is appointed by the majority ruling party. Therefore there is only one election. The Prime Mister does not have a term limit as long as he has the support of it members. The Prime Minister will answer to Parliament. The Presidential Model has a head of state which is the President; for example in the United State it would be Obama. While the Parliamentary Model has a Head of State and Head of Government; for example in Belize the Head of State is the Governor General which represent the queen Sr. Colville Young and Head of government is the Prime Minister Dean Oliver Barrow. In Presidential Model dual political parties can exist in congress and on Parliamentary Model one political Party hold the majority party power. I believe that due to our history and the fact most countries in the Caribbean were once a colony of England the Parliamentary Model is best suited.

Compare and Contrast Parliamentary. (2016, May 17). Retrieved from https://studymoose.com/compare-and-contrast-parliamentary-essay 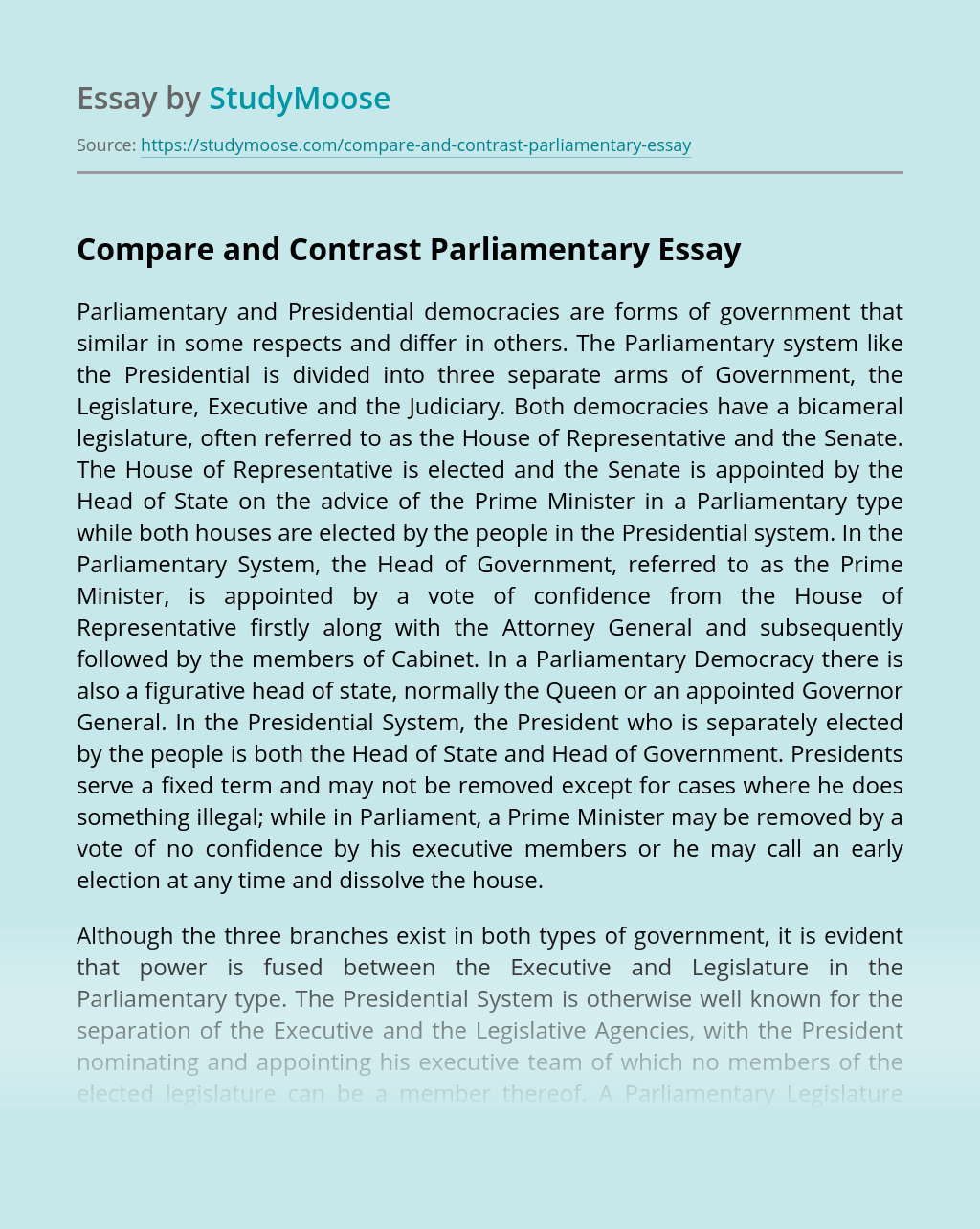