The world of today has many different aspects towards the view of politics. Countries around the world all have diverse components, which makes that state in particular unique. The systems of the world are used to govern the state as its best of the ability according to the ideology and attitude of that particular state. Many states around the world are merging towards the democracy state and taking up many of its characteristics. The characteristics are not set for a specific one because each democracy in the world today contains different ones but essential ideas.

Don't use plagiarized sources. Get your custom essay on
“ Parliamentary System, Presidential System and Democracy ”
Get custom paper
NEW! smart matching with writer

Characteristics of the systems

The presidential system is a political system that holds the president as head of the government and the chief executive chosen in a democratic election.

The president holds the office for a fixed term, which in the U.S. is for four years. There is separation of powers due to the fact that there is no overlap between the executive and the legislature and there are independent of one another. Being so, the president has no right in removing any of the legislature form office unless a vote is done under certain conditions. In this system there are limited number of parties and usually a two-party system.

In the United States there is also a first-past-the-post electoral system and the offices are elected usually by the individual not as a party.

The parliamentary system is a political system that the head of the government role and the head of the state role are both assigned to separate executive individuals. The Prime Minister is the chief executive the leader of the party, which gets the majority of the vote to the legislature but does not hold a fixed term. The separation of powers is very minimal in this system because they both overlap and need to work together so the government will not tarnish. With this instance, the prime minister can be removed by the ‘vote of no confidence’ by an opposing party in a vote through legislature or by his own party outside the legislature. In this system, there is a single party or a coalition of parties. Great Britain holds a single party majority system but also a proportional representation electoral system is practiced in some states and more of the population is represented.

Differentials in systemsThese two different types of executive-legislature systems hold their own components and are used by the democracies of today. One main variation is the separation of powers between the two systems. In the presidential system the powers are pretty much divided into the three branches of government which are the executive, legislature and judicial. The official serving the terms such as in the Senate or House of Representatives as well as the president serves the fixed terms but in the parliamentary system the offices in executive are basically derived from the legislature and can be dismissed in varies ways. Mainly the prime minister holds the power but it is highly supported by the legislature and can be thrown out if the legislature decides he is not efficient.

Another aspect in which the both systems differ is in the party discipline each one possesses. In the parliamentary system it is more unified and structured due to the fact that if any of the components of the system do not collaborate the downfall of the government is possible. So the executive and legislature are better off in collaborating and agreeing on the issues at hand and also the separate parties also seem to al vote as one because they are able to win the majority easier. On the other hand, in the presidential system the parties and branches seem to be less structured. This is because if they fail to agree or collaborate the failure of their government is not at risk. The parties in this system face less pressure to vote with their party and also they are voted in by the public and can identify themselves with them in other aspects not just their party. In this system the legislator and executive vary in parties and are not particularly of one as in the presidential system. Many officials c derive from different parties and if no majority party is really formed a coalition can be formed in order to have more power in the system. Great Britain has held such coalitions in such instances during its history.

Consequences and tradeoffsThe executive-legislative systems both have their advantages and disadvantages. In the parliamentary system it is argued that the prime minister himself is derived from the legislature and less conflict will be on the rise with the executive and legislature. Even though this is argued there is a different view, that there is danger in both the prime minister and legislature holding so much power since they both emerge from the same political party. The bright side of the smaller and more parties in also a big advantage of this system but there is a down side to this as well. It is said that it can be a problem that so many little parties might gain power and brought into the cabinet in exchange of support. Also even though the multiple parties in the system might limit competition in the executive and legislature, it can put too much of it into the executive itself.

In the presidential system there are the downs and ups. This system seem s more appealing to the eye due to the simple fact that the people play a mayor role in electing the officials especially the head of the government, which is the president. It is argued that there might be too much power in one person because the state and government are both merged into one and it might undermine democracy. Although the president holds such power the argument that both the executive and legislature are elected separate and therefore a divided government comes at hand. So it appears there would be more of a prone toward authoritarian collapse. Although this is argued it is also more repellant to facing stalemate as can come about when the executive and legislature in such a system consist of members exclusively or prominently from different political parties. Both systems have their ups and downs but it is up to what the state decides its best fit.

The democracies around the world all want what is best for their state and government. Many states in today’s world all want to achieve and merge towards the whole democracy aspect. The two systems of the presidential and parliamentary are both options in achieving this but it depends on the state itself. Depending on what kind of ideology and attitude the state is in it will choose the system. States set their governments after a certain other state, which they may like to follow. For instance, the U.S. democracy followed the British but now holds different components. Both systems have their ups and downs and basically the same essential components that makes a democracy a democracy but varies in the way it works. The separation of powers, terms of executive and legislative branches and the party discipline all are some of the aspects they both hold but both differed. It’s simply up to the state to see which is best fit and which one will work best with the type of government they desire to end up with. 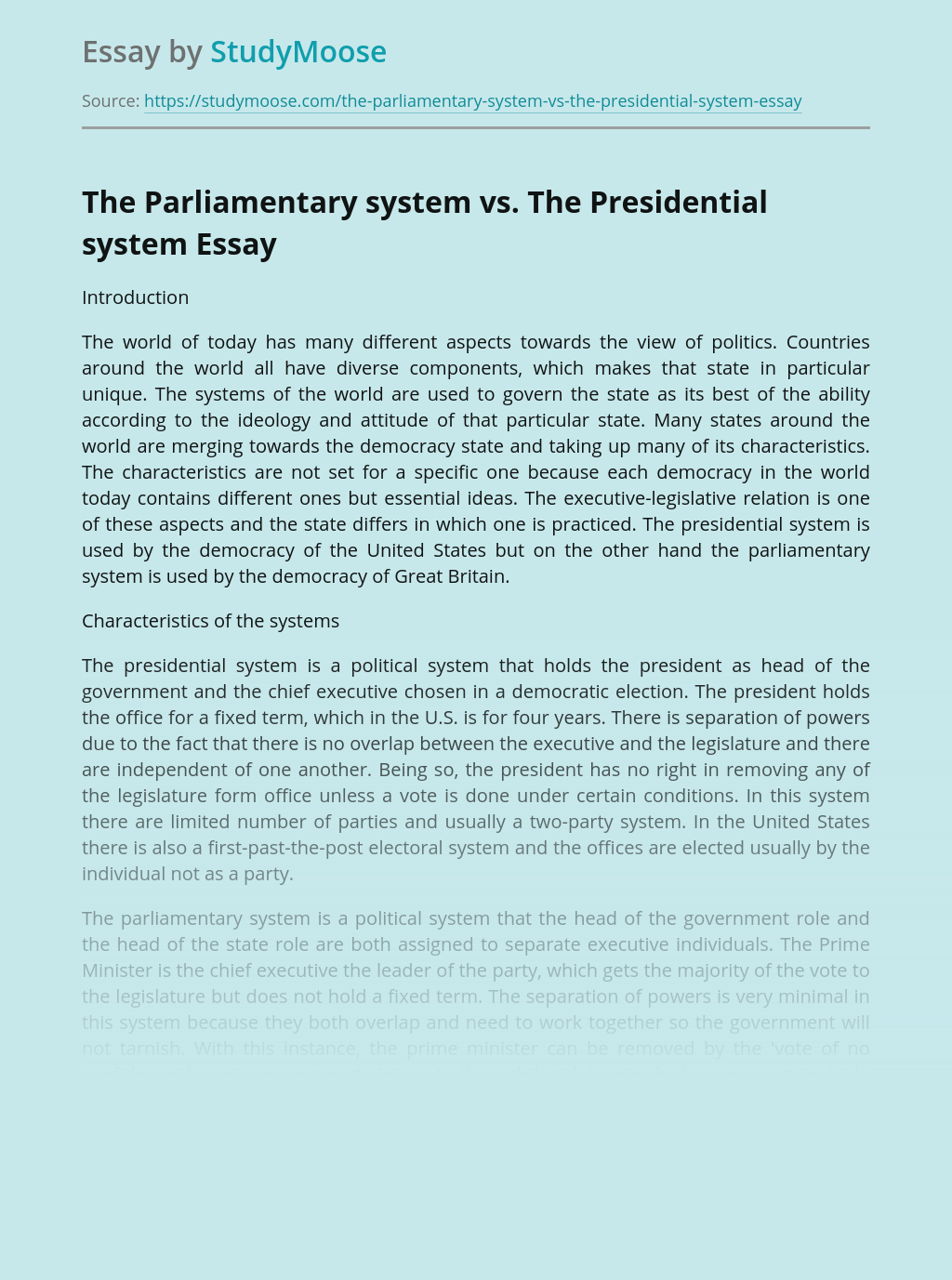