Speech and Rhetoric in Invisible Man

Many fall victim to the influence of powerful speech—throughout history, public speakers have used oration and rhetoric to manipulate their listeners. Public speaking is an art, as it is often practiced and rehearsed. Politicians, for example, consciously employ the art of oration in hopes of gaining support, sometimes abandoning their own beliefs in order to cater to the audiences’. Similarly, the Invisible Man, in the Invisible Man by Ralph Ellison, lives each moment as if he is a politician delivering a speech under the scrutiny of an audience—he constantly disciplines himself to adhere to the expectations of others.

Don't use plagiarized sources. Get your custom essay on
“ Speech and Rhetoric in Invisible Man ”
Get custom paper
NEW! smart matching with writer

Ironically, the scenes in which the Invisible Man actually delivers speeches offer the most genuine glimpse of his identity as he loses self-control to his passion and speaks from within. The continual triumph of his discipline to please others prolongs the Invisible Man’s journey to self-awareness. Through his speeches, the Invisible Man uncovers a subconscious place where his emotions take over; from his own words, he learns about his identity and his past.

When he gives speeches, the Invisible Man is no longer literally invisible—he is the focus of an audience and people can see him.

Throughout the novel, the Invisible Man isolates himself by associating with people who lack best interest in him. However, he forges true human connection with others when he is an orator giving speeches, particularly during the eviction speech and his first speech with the Brotherhood. The Invisible Man establishes intimacy with his audience with his tact rhetoric: he uses inclusive language and emotion to appeal to each individual.

When he delivers the speech at the eviction site, he says “…We’ve been dispossessed…” (279).

By saying “we,” the Invisible Man groups everyone together, and asserts that they are all at an injustice, which invokes interest in his listeners. He sets up his speeches like a dialogue, and members of the audience can respond. The Invisible Man also takes off his cloak of invisibility by making connections with himself. As he starts to speak with emotion on a cause he believes in—social justice—the Invisible Man becomes in touch with his ability of self-empowerment. Whereas he typically looks for acceptance in how he is received by others, the Invisible Man instead finds himself.

While he gives a speech in Harlem on behalf of the Brotherhood, he abandons what Brother Jack tells him to say, and as a result finds himself “becom[ing] more human” (355). Instead of fabricating his words to please the Brotherhood, he speaks with honesty and therefore is acting upon his own free will. He disregards that his audience is mixed, and says what he really believes, which is social equality and action. In other instances, the Invisible Man would have been more deliberate about catering to his audience, however, he speaks passionately and freely because he gains a sense of authority while giving his speech.

Afterwards, he thinks about why he said he felt “more human” and thinks that he feels “less Negro. ” By saying this, the Invisible Man learns that race is not an absolute in defining a person. The distinction between black and white becomes less relevant to him, as he starts to believe in his potential after being successful in his public speaking, and believes in his own words of wisdom on social equality. The Invisible Man is able to shed his need to censor himself according to the expectations of white people because he is overcome with emotion.

Following the Battle Royal, he presents his commencement speech on civil obedience to a group of white, powerful men. He means to say “social responsibility” but as he loses focus in an exciting moment for him, he instead says “social equality. ” Outraged, the white men make the Invisible Man correct himself, and he does. By saying social equality without thinking beforehand, he reveals that social equality is what he really wants, a concept he would never consciously think of on his own time. Later, during his speech on behalf of the Brotherhood, the Invisible Man forgets everything that Brother Jack had told him to say.

He improvises, saying “I could feel the words forming themselves, slowly falling into place” (345). The Invisible Man does not consciously plan each sentence he speaks; he spontaneously lets his subconscious control his words. Although he has not rehearsed the speech he delivers, it is very eloquent and effective, suggesting that subconsciously he has had these feelings inside him for a while. He then says, “I suddenly have the urge to affirm my feelings” and talks about his blindness to injustice in his own life (346).

The word “affirm” denotes previous thought on the matter, just that he has not vocalized them until now. The Invisible Man also reveals that he has less control over himself than usual by saying “urge,” as he is speaking on impulses. Following his speech, he reflects on what he said, and makes many discoveries of his own character that he would not have realized about himself without his subconscious informing his improvisational speech. He comments, “We create the race by creating ourselves” (354).

Never before does the Invisible Man make such an assertion that racial restrictions are self-imposed, and that he has the ability to change his future. Without his subconscious informing his improvisational speech, the Invisible Man would not have made progress towards self-awareness. The Invisible Man’s journey tracks his pursuit for success, and he is most successful as a public speaker, which is suitable because when he delivers speeches, he is honest, genuine, and secure. He is in a constant battle with himself to suppress his own inclinations in favor of living according to the dictates of society.

This theme of the subconscious versus the conscious occurs throughout the book and is mirrored in the speeches he makes. When he starts his speeches, he is often nervous and stumbles on his words. However, when he abandons the speech he thinks white people would want to hear, his oration and rhetoric is much more effective. He finds clarity in speech when he speaks from his subconscious, mirroring his journey towards clarity in his understanding of himself and of the world—only when he realizes that no one but himself can dictate his life does he come to understand his place.

Speech and Rhetoric in Invisible Man. (2017, Jan 20). Retrieved from http://studymoose.com/speech-and-rhetoric-in-invisible-man-essay 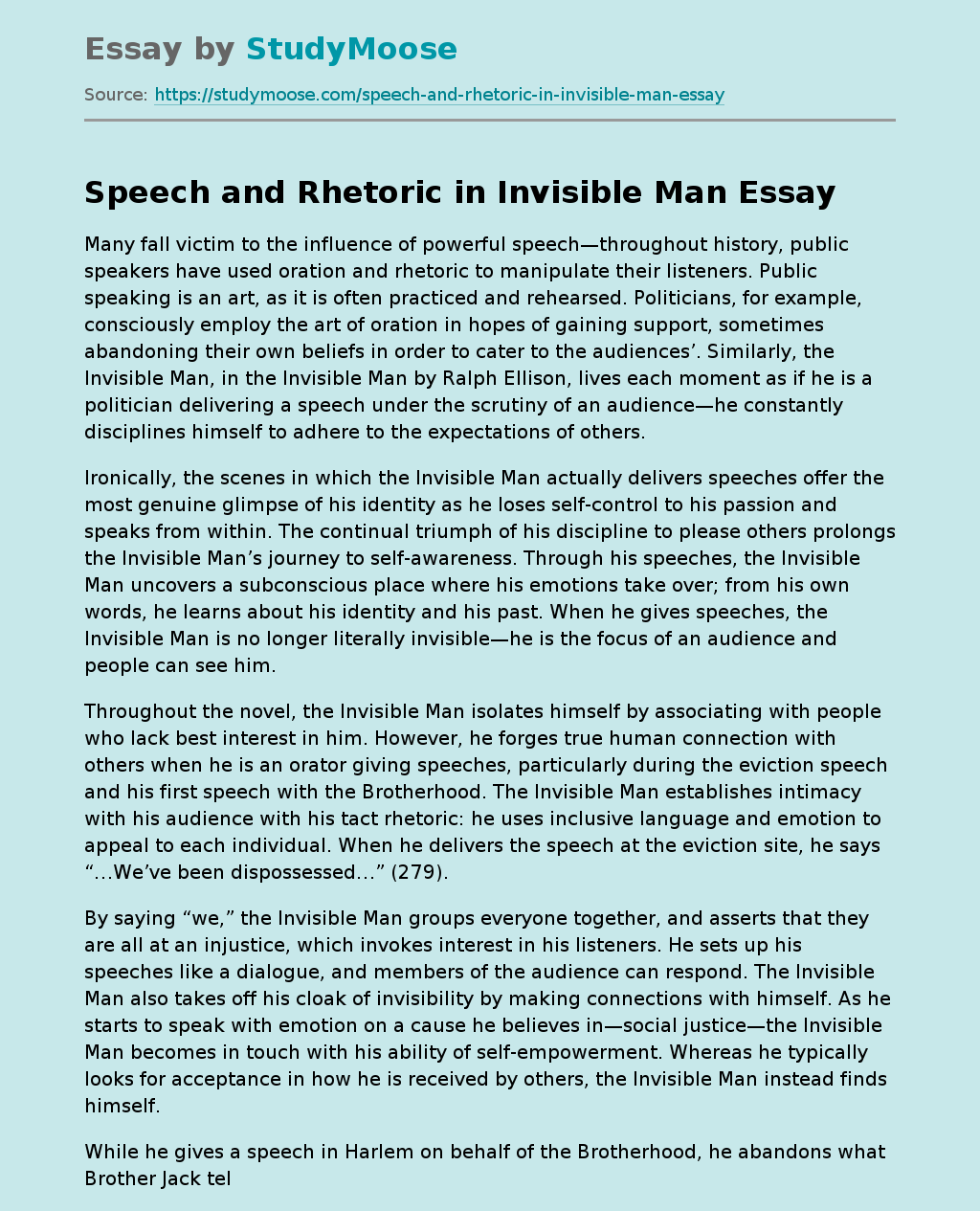