Who is the Brotherhood in Invisible Man?

When you live in world full of hate and oppression it’s hard to find yourself, now imagine being a black male trying to find yourself in a world with white supremacy and hate within your own race. In his novel, Invisible Man, Ralph Ellison’s narrator is continuously being accosted with finding his identity in his world.

The narrator trying to embody and find who he is tied with communism. The Brotherhood can be compared to the Communist Party in the sense that only the organization’s success is all that matters.

Don't use plagiarized sources. Get your custom essay on
“ Who is the Brotherhood in Invisible Man? ”
Get custom paper
NEW! smart matching with writer

He feels like he’s finally part of society by somehow having control and being part of something. In some sense, the Brotherhood can be compared to a for-profit organization in which an organization claims to stand for something larger but can be seen as a greedy imposter with their own agenda in mind. All they want to do is get more attention and pretend they’re interested in something to gain an audience.

Another example of an allusion is Louis Armstrong. The narrator references Armstrong’s song “Black and Blue” which can suggest that he’s trying to find his identity and place in this world. The reference to the song can signify his defeat, as if he were beat and left black and blue due to the bruises that have been caused. The narrator struggles to find out who he is and by referencing this song he can convey that at some point he had given up and didn’t want to continue dealing with society and its expectations for a black male. The narrator starts to see his life as a drudgery and wants to move on from this stage although he can’t. After he starts working with Dr. Bledsoe his sense of being “Black and Blue” slowly starts to decay because he doesn’t feel so out of place in society although all he does is drive around a high and mighty white man. Being enrolled in the college makes him more part of society as he is now out in the open and not in the room full of lights where we first find him. It’s as if getting a job made him open his eyes about the way he had lived in the past.

The narrator is faced with ominous dilemmas throughout the novel which can be considered archetypes. One of these archetypes can be Dr. Bledsoe. Dr. Bledsoe is an arrogant even a malicious man who cares for no one but himself. He wasn’t afraid to admit that his success was the most important thing for him. Bledsoe’s way of success can be seen as the narrator’s grandfather’s view of life which was, “overcome ‘em with yeses”. With the comprehension of his grandfather’s perspective of life the narrator is able to see how corrupt Bledsoe is and his real identity. Even after he gets expelled, the narrator remains sanguine and tries to follow his footsteps. This is where we learn that the narrator can’t really do anything for himself and that he only wants to fit in although he always says the opposite.

Uncle Tom is a big archetype in this novel and one example is Lucius Brockway. Brockway was the creator of the Liberty Paints slogan which reads, “If it’s optic white, it’s the right white”. This slogan is similar to the one the narrator grew up hearing which says, “If you’re white you’re right”. Both these slogans emphasize that being if you’re white you’re set for life. Having both these slogans concern the color white indicate that the narrator grew up with white supremacy and that he’s still living through it now. Another example of this archetype would be Ras the Exhorter calling the members of the Brotherhood “Uncle Toms”. This can advocate that fighting for equality is not beyond judging others as the members would often get jumped and ridiculed.

Literary devices flourish throughout the novel which help emphasize what the character is going through. These literary devices include symbols, themes, motifs, and irony. The whole novel is based on the narrator who struggles with finding himself within society as a black male. He has to learn how to cope with the disparage for being a black male within society.

An example of a symbol could include Jesus’s life because since the beginning of the book the narrator believes “he’s the chosen one”. Once he gives his speech at the Battle Royale, the people around him start believing this as well. Not only is he seen as the chosen one but someone in the crowd points out, “He’s a good speech and someday he’ll lead his people in proper paths” (Ellison 32). As the narrator is finding himself he can portray Jesus’s life. Chapter 11 can be depicted as Jesus’s birth because the narrator is starting to get involved in the Brotherhood. Chapter 13 can be depicted as Jesus gaining disciples because as the narrator gets more involved in the Brotherhood the more he puts himself out there and finds a place.

Who is the Brotherhood in Invisible Man?. (2020, Nov 12). Retrieved from https://studymoose.com/who-is-the-brotherhood-in-invisible-man-essay 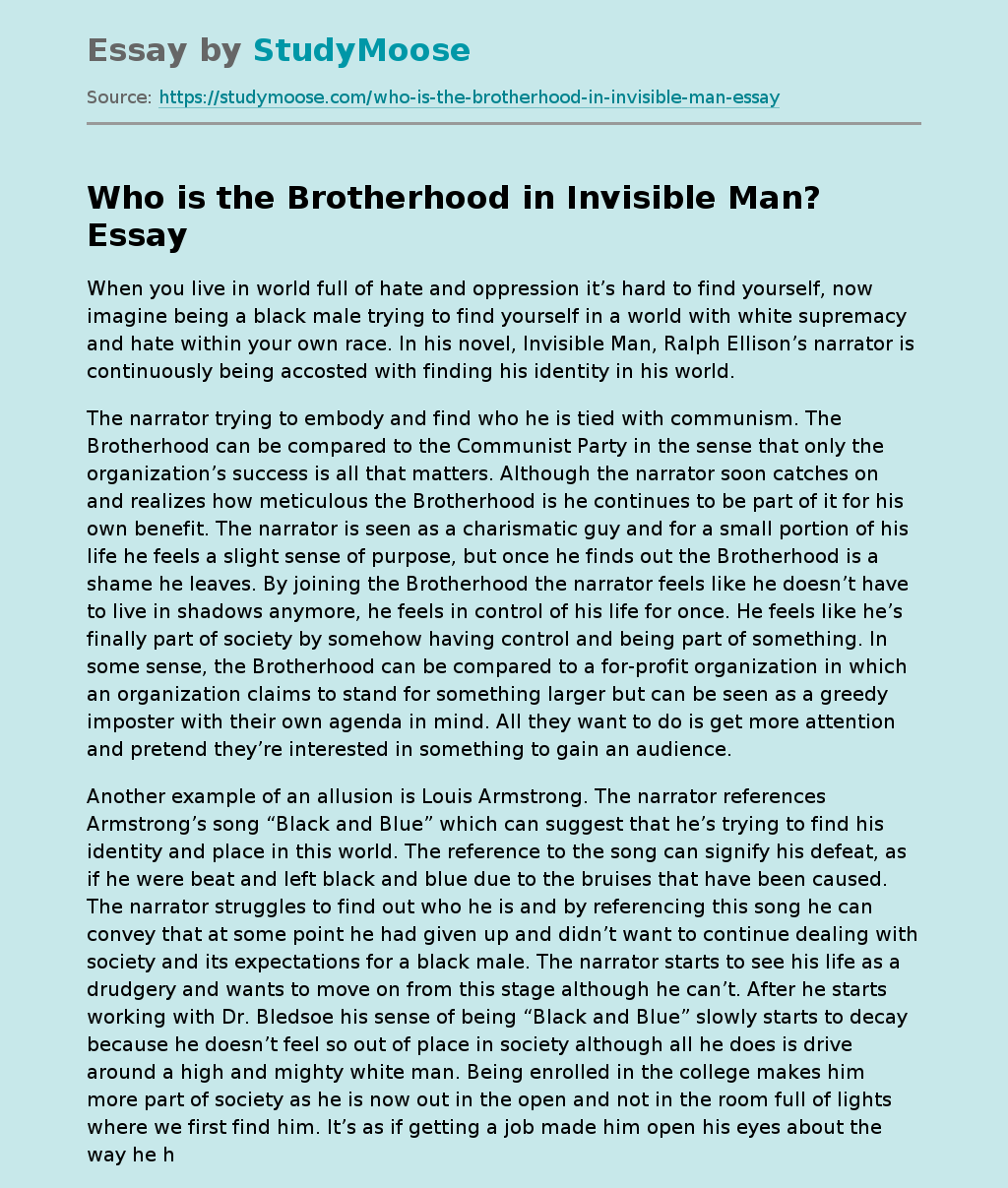