In the novel The Invisible Man, Ralph Ellison utilizes symbolism to provide insight into the biased society and the stereotypes that come along with being a black man in America.

The symbolism of the colors black and white is prevalent when the protagonist is sent to New York as a consequence of his expulsion. When he is seeking a job at some of the most wealthy men in New York, he was turned away and referred to a paint plant instead.

Don't use plagiarized sources. Get your custom essay on
“ The Invisible Man Literary Devices ”
Get custom paper
NEW! smart matching with writer

This paint plant was quite patriotic and notorious for its Optic White paint color. In order to create this white paint, the narrator was told to always follow the directions and add “ten drops of black toner” into each container (200). Adding this black toner to the white paint symbolizes the integration of the African American race into the white people of America. Blacks have always been belittled and not expected of much simply because of the color of their skin.

They have been taught that the “only way to please a white man is to tell him a lie” (139). This differentiation between the two colors is what has drawn the conflicts between blacks and whites. This is why the relations between the two races are constantly deteriorating and there are so many misunderstandings which prevent the two from coming together and putting their differences aside. Although America may be thought of as a white man’s country, the truth is that America would be nothing without the hard work and labor of blacks.

Not being appreciated for all of their contributions causes the “black despair of black people” (130). Slavery has caused each one of their precious memories that they once thought of with love to turn to sorrow. They are suppressed and living under the demand and control of the white people.

The symbolism of sight and vision in this novel exposes the flawed nature of the characters. Reverend Barbee gave this amazing speech to praise the Founder of the college and how Dr. Bledsoe was to take over after the Founder’s death. The narrator was quite moved by this speech and knew he would have a hard time parting with this college due to his expulsion. He was surprised to find out that Reverend Barbee, a man of great passion, was “blinking with sightless eyes” (133). Although Barbee was blind, that did not lessen the effect he had on the audience, leaving many of them teary-eyed. Barbee’s speech allowed the protagonist to “see the vision” (133) of how this college was built as a legacy and each student was so lucky to attend it, under the leadership of Dr. Bledsoe. When the narrator had shown up to the office of a successful man in New York looking for a job, he was told that “Ambition is a wonderful force…but sometimes it can be blinding” (184). The narrator had come feeling confident in his abilities but was left feeling discouraged, after being told that maybe he was reaching for too much. The man doubted him and how far he could get in life, once again a white man belittling a black man and not expecting much of him.

Irony reveals the theme of freedom, self-acceptance, and invisibility within the novel. The paint company that the narrator goes to work for is called Liberty Paints and is quite patriotic. The paint plant defines itself as very liberal and full of freedom and yet has racism engraved in some of its biggest operations. The factory is known for its white paint, which can cover up any tint or stain almost immediately (202). This directly correlates to how America is constantly trying to cover up black culture with white identity. In this case, black people are considered the “stain” on top of the “purity” of white people (204). Another ironic factor of this paint plant is the fact that its most popular Optic White color can only be made by mixing “black toner” into the paint. The dark toner assimilates and disappears into the mixture so well that the true components of it can’t even be told apart. This illustrates how the “toner” or the black people do all of the work to make America how successful it is and the white people get all of the praise for it. The white people earn the highest wages and are given the most respect although they may not have even done half of what the black people did.

The narrator is constantly struggling to build an identity and come to terms with who he is. He believes himself to be invisible, not because he really is but because he feels as if though he is not seen. He finds it difficult to “make them recognize you” because it is as if he does not matter enough to draw anyone’s attention. He longs for recognition and to be a part of this prosperous country but is never given that satisfaction. He soon becomes “aware of my invisibly” and uses it to his advantage (Prologue). He no longer has to pay rent or act a certain way. This invisibility gives him the freedom to live the way he pleases. At times he does “ache with the need to convince yourself that you do exist in the real world” (3). He feels that he is not seen by others and has no impact on the people around him. Although this was a difficult concept to process for the narrator, the ironic part of this is the fact that he is not actually invisible, society just makes him feel that way. This relates to how the black community can often feel like they don’t matter or that no one cares for them. They may not even consider themselves a part of the American Society even if they are the backbone of it.

One thing that distinguishes the black community from others is how unified they are. They all “believe in brotherhood” and showing up for one another when it is needed (282). They know it is against the white folks so they tend to stick together. The elders constantly rely on the younger generation to “take the lead” and “move us all on up a little higher” (255). And so they did. They continue to progress and hold higher standards in society. This may cause the white community to feel threatened. The blacks are constantly encouraged superficially to do bigger things and reach for the stars but when they actually do, they are being pulled back. A skilled vet capable of saving a human life was “forced to the utmost degradation because I possessed skilled hands” and those white men couldn’t tolerate the fact that “my knowledge could bring me dignity” (93). It’s ironic how they are pushed to be the best version of themselves and yet are degraded and stripped of their dignity when they show some promise and potential. It’s almost as if the white people didn’t want them to flourish.

Metaphors are what gives this novel its hidden underlying purpose, from the white lines on the road to the briefcase. When the protagonist is given the opportunity to drive Mr. Norton around, he feels honored. He knows this is an important task and is careful to “follow the white lines” as he drove (46). The color white holds significance in this novel because as they say “white is right” (200), these white lines act as a guide for him to follow. This signifies how when the narrator goes to work for Liberty Paint, the white paint is used as a method of assimilating black culture into America. They are covered up in whiteness and are expected to conform to society so they don’t stain the country with their unique black identity. It also shows how there are guidelines for every black person living in America. They are expected to look and act a certain way, especially to stay in their place because they are considered not worthy of being equals.

In the opening chapter of the novel, the protagonist had wanted to present his speech but had to overcome the vicious Battle Royal first. This illustrates the racial inequality that is still prevalent in today’s society and the control that white men have over the black community. These innocent boys were forced to fight each other to the death and “there was nothing to do but what we were told” (21). The whites abused their power and used this Battle as a method of entertainment. Although the narrator was able to pull through and won the Battle, this progress was not able to get him very far. He had wanted to deliver his speech in an effort to show the white men how much knowledge he had and to obtain a scholarship (24). After the Battle, the boys were tricked into thinking that they were being rewarded with money, and instead “the rug was electrified” (27). The white men took advantage of the vulnerable situation and knew that the black boys were in need of money. They electrified the rug and stuck the coins to it just to watch the current go their body as they twitched in agony. This method of torturing the boys was humorous to them and signifies how blacks are considered inferior. The battle and scrounging for money dehumanized the back boys, almost portraying them as if they were animals.

When the narrator is walking through town, he comes across Tod Clifton, who had once been a member of the Brotherhood and was now selling Sambo Dolls. These dolls signify how black people have had to “dance” just for the “perverse pleasure” of whites (431). It shows how there is a negative stereotype associated with this doll which brings forth how black people sing and dance to entertain white people. The doll is a metaphor for how much control whites have over the black community. The narrator goes on to describe it as “the inanimate, boneless bouncing of the grinning doll” (432). It is inanimate because black is not doing it out of their own joy, it is because they have to. The doll is held up by these invisible strings which control each and every movement. Just how the whites control the movement and capability of the blacks. The hierarchy system causes the black community to submit to the power of the whites, leaving them incapable of living freely. 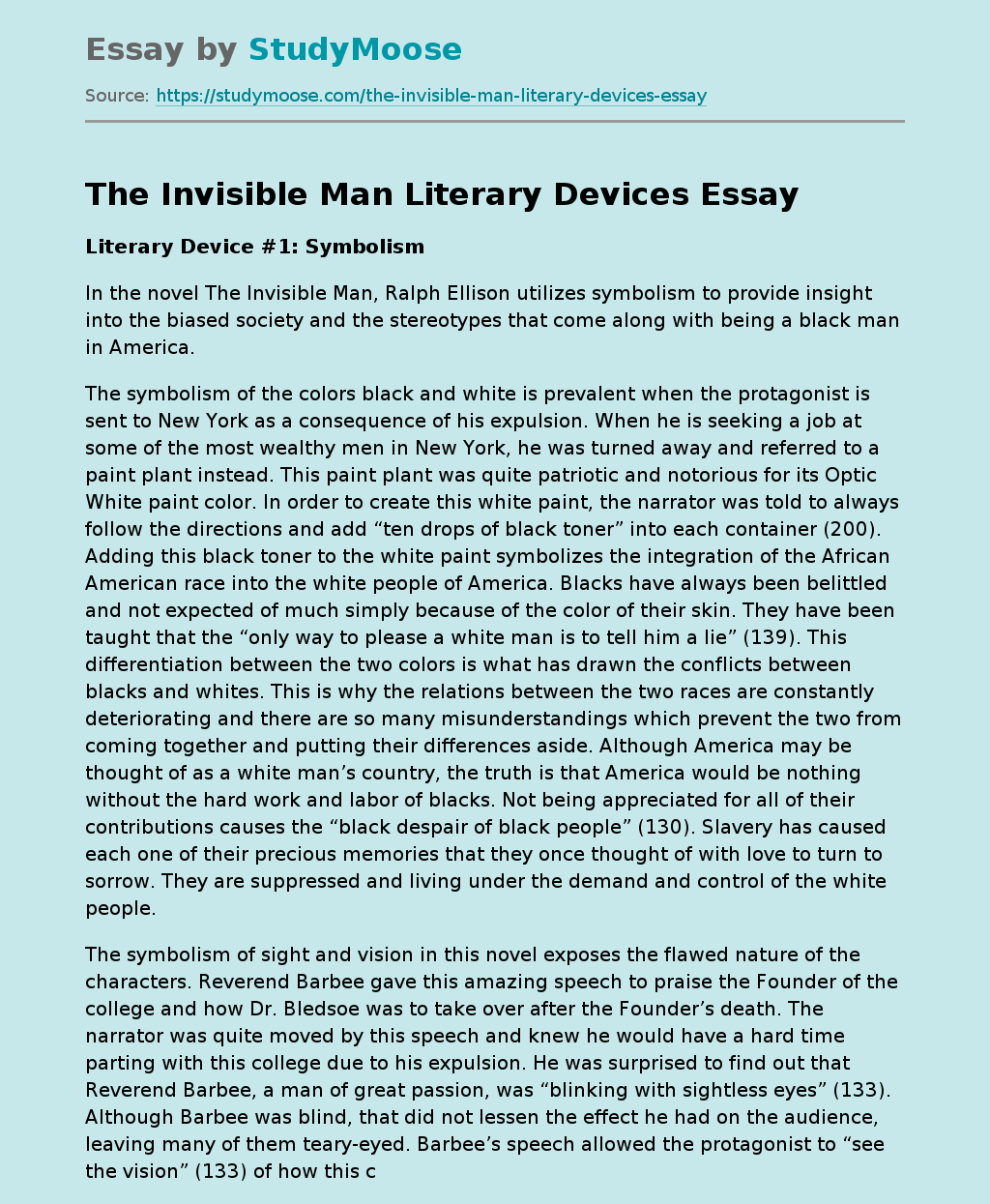