In Ralph Ellison’s Invisible Man, women are portrayed as an influential role in shaping the narrator’s life. They were all used to help depict the Invisible Man’s exploration of freedom and his own place within society. Each of the female characters within the novel is enforced in the Invisible Man life through social inequality and invisibility in comparison to being portrayed as symbols instead of individuals. They help the narrator portray his own heroic identity through multiple journeys.

Don't use plagiarized sources. Get your custom essay on
“ Influential Role of Woman In Ralph Ellison’s Invisible Man ”
Get custom paper
NEW! smart matching with writer

Both black and white female characters demonstrate the distorted stereotypes that are established by white males. In particular, Mary Rambo was seen as a force that continued with him throughout his journey and she was the one who made him realize his own heroic potential as a black man in society.

First off, the racial division depicted within the novel is entirely obvious whereas the Invisible Man couldn’t visualize any black and white female characters as human. This starts off with the old slave woman who provides the narrator with one of his first lessons of a sense of motivation for freedom.

The narrator states “Old Woman, what is this freedom you love so well?” (IM, 11) The old slave women who were urgently eager to obtain her own freedom demanded a force of activity. This action needed to be achieved by the narrator so he can commit and comprehend his own adult heroic potential (Tate 165-166).

Secondly, the narrator’s encounter with the magnificent blonde is one of the first confrontations with mixed feelings about whether he should acknowledge any form of humanity and consciousness of both women and himself.

“ A magnificent blonde-stark naked… I was strongly attracted and looked in spite of myself.” (IM, 19) The magnificent blonde serves as a sexual taboo whereas any possibility of freedom is suppressed from the narrator due to the allegorical linkage of black individuals being penalized for applying the act of freedom of choice. This is interpreted as the accusation of rape and the narrator struggles to face any region of consciousness due to this taboo and showing any sexual responses to the magnificent blonde. The development of the narrator’s awareness of himself is associated with the common plight he has with the magnificent blonde which is one of the first lessons of invisibility. They are both exploited objects and she conceals herself behind a mask so she can be “invisible” and lack any identity imposed on her. She is not seen as an individual, but purely as an object for entertainment purposes (Sylvander 77-79; Mohamed 6).

Mary Rambo shares an extraordinary position within the novel. After the narrator’s dismissal from the hospital, she takes the initiative to help him and be his caregiver whereas she feeds and comforts him. She is seen as a mother figure who comforts her child, and she renames the narrator. She nurtures the narrator back to health so he can pursue his life that will benefit their community. She states, “What do you plan to make out of yourself.. I hope it’s something that’s a credit to the race.” (IM, 255) Mary was also seen as a symbol of hope and encouragement for the narrator since he has mixed feelings about whether he should acknowledge any form of humanity within himself. He has no self-identity and he lacks any sense of direction, but on the other hand, Mary is that force that leads the narrator into realizing his own identity of adult heroic potential. She teaches him to have his own voice, agency, and memory to navigate his own life. She is that force behind Invisible Man’s appearance that is seen as an instrument in saving him. Mary attempts to be that instrument to free the narrator from what imprisons him along his journey. For the narrator to assert his own voice he must not resist any attempt to converse with Mary this will allow him to acknowledge his own power (Benjamin 126).

Additionally, her strength that is depicted in the novel is shown when she states “Don’t let Harlem git you. I’m in New York, but New York ain’t in me, understand what I mean? Don’t git corrupted” (IM, 255). This explains how she is able to see the narrator’s humanity. Every aspect of her nature and identity shows how stable her humanity is, which is something the narrator lacks. For Mary to see this expresses how she sets the tone of the narrator in finding himself. This also includes her altruistic ways of being selfless and being more compassionate toward others. Her humanistic stability is what causes that narrator to be drawn back, she is seen as a stable force that lingers in the subconscious mind of the narrator where he finds himself in trouble this is shown in the Epilogue (Sistrunk-Krakue 28-30; Tate 168).
Likewise, Sybil is humanly vulnerable and strongly sensitive to those who share her plight of invisibility. She is one of the utmost images in the novel that depicts the growing insensitivity to the humanity of women that the narrator fails to see. There is a distinct difference between her and Mary, however, she helps the narrator realize along his course of obtaining freedom that he can use his invisibility as a valuable asset. This is after he seeks out and chooses to use Sybil because of her vulnerability. For example, she is lonely, misunderstood, neglected, and wistful. She directs the narrator to an outline of false images due to perceiving repression as a social sickness that replaces the reality in people with a lack of imagination. After his encounter with Sybil, this leads the narrator to his next step of realizing a new level of perception for the black community to take actions into their own hands and act against any forms of inequality that have been repressed due to humanity within the community. Without this encounter with Sybil, the invisible man wouldn’t be able to identify himself as being invisible but not blind (Eversley 184-185).

All in all, the exploration of finding one’s place in society was problematic due to the effects of social inequality and invisibility of being seen as symbols instead of individuals. Each of the female characters that are present in the narrator’s journey has played an influential role in some way. The encounters with the old slave woman provided the sense of motivation for freedom as a black man who has been robbed of that right during the time. The magnificent blonde provided that the narrator with the ability to acknowledge the forms of humanity and consciousness in both himself and women. This was a difficult process due to the fact that women were only visualized in society as sexual objects. Sybil is one of the most absolute images in the novel to displays how women are visualized. Her vulnerability and strongly sensitive personality are what men see all women depicted as in society. She demonstrates the narrator the thought of using his own form of invisibility and an asset that can help him along his journey.

However, one of the most influential roles that continued with the Invisible Man from his first encounter with her was Mary Rambo. She proceeded to hand over two new identities to the narrator that help him understand his own potential to achieve strength and to let go of any type of self-doubt such as Jack the Bear. This is accompanied when he acquires full confidence and power to lead his community as John Henry. Mary’s individual humanistic stability that is not seen in any other female lingers with the narrator until he finds himself in the same position he came from before. 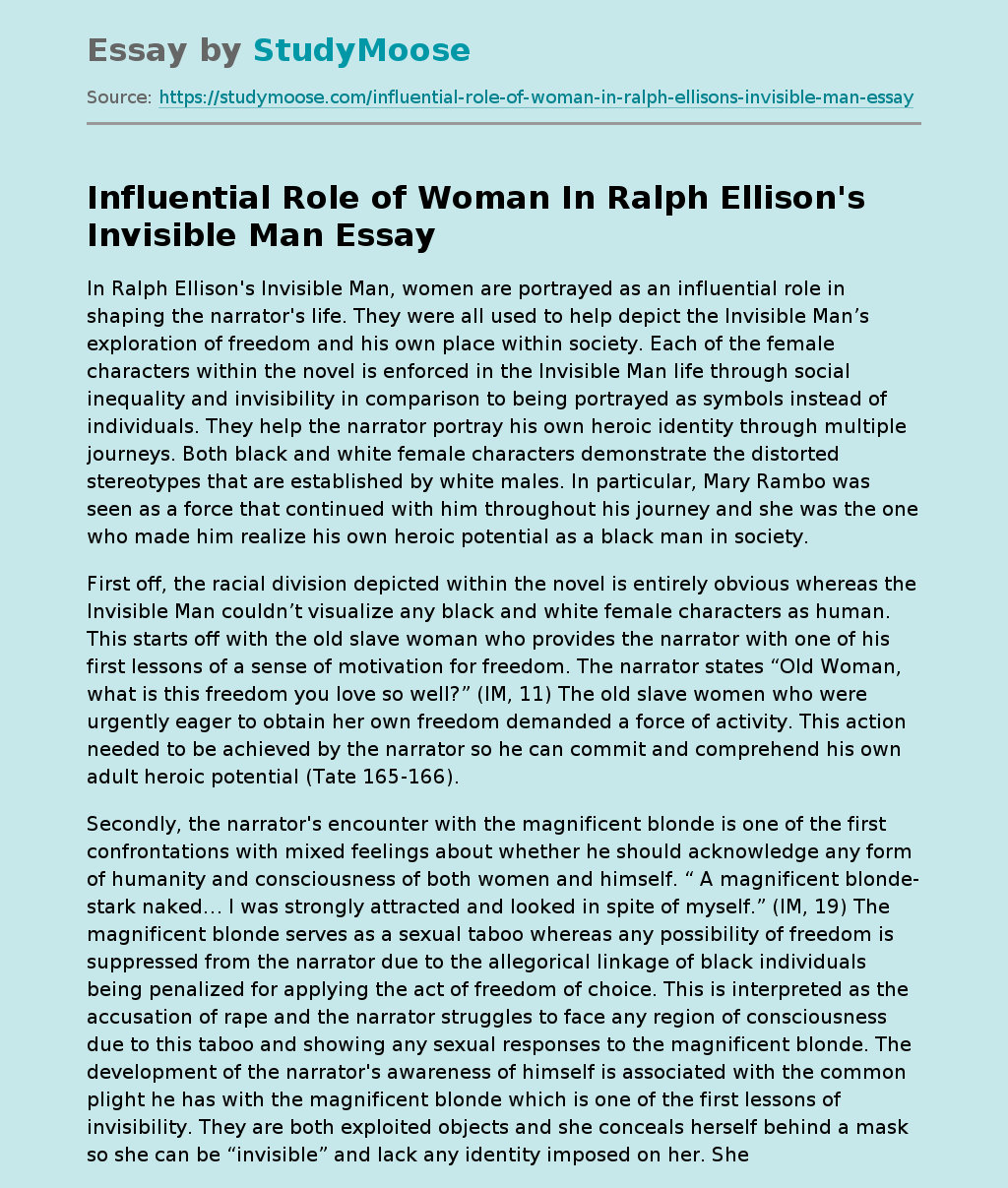