Culture, and the way a man is perceived by the public, leads to a search of finding his true identity. In Invisible Man by Ralph Ellison, the narrator is still in a time where there was oppression towards African American people. The narrator is a young black man who attempts to find his place in every community he’s a part of during the early 20th century. He remains nameless throughout the entire novel where reality feels surreal. He realizes that he is ultimately invisible, due to the fact that everyone he meets can only view him as surroundings, themselves, or figments of their imagination.

Don't use plagiarized sources. Get your custom essay on
“ Identity of Invisibility ”
Get custom paper
NEW! smart matching with writer

Trying to change in order to appease social standards, will cause the loss of his true identity, and inevitably make him “invisible”.

When the novel first unravels, the young narrator’s thoughts of his race are not complex. He only understands that the most important thing in a black man’s life is to please the white man.

He delivers a speech that includes words from Booker T. Washington that says blacks should cooperate with the whites that are in power. He then realizes that his ideologies can destroy his life. The narrator has an incident with Mr. Norton, a rich white trustee of the narrator’s college. Quickly, the fact that Mr. Norton is oblivious towards the African Americans’ lives is portrayed. The destruction occurs after helping Mr. Norton, when he falls unconscious, “The white folk tell everybody what to think—except men like me.

I tell them; that’s my life, telling white folk how to think about the things I know about” (Ellison 143). Dr. Bledsoe confronts the narrator with a derogatory term and the narrator is shocked that his seemingly harmless actions have detrimental repercussions. He does not understand that there is more to his life than keeping the rich white man satisfied. Soon after he moves to New York, his thoughts about race become more complex.

At the beginning of Invisible Man, the young narrator viewed the white people as somewhat god-like. He felt that they should always be pleased, as shown through his interactions with Mr. Norton. It’s important to understand the hardships African Americans faced due to the cruel actions of white people, and still, they are considered superior. As a young black man in America during the 1920s, the narrator often experiences racism. This is before realizing that white men aren’t really that much more important than he is. The narrator tries to find himself when he is sent to New York, which is completely different than his southern background. He is still confused and unsure of his new role and identity. As he adapts to his new life in Harlem, he attempts to orient his relationship to his new community.

As the narrator walks through the unfamiliar streets of Harlem, he encounters a vendor and immediately smells the aroma of baked yams. The odor reminds the narrator of his childhood and southern background. The yams symbolize the relationship between the narrator’s past and present. The narrator wants to lose the southern aspects of his life and forget his past when he arrives in New York, but he still has a history. For his entire life, the narrator has been trained to think that certain aspects of black cultural life are shameful or represent a form of black inferiority. The narrator realizes that there is no reason to dislike yams other than to gain white approval, which is something that no longer interests him.

Throughout the novel, the narrator references and constantly remembers the words his grandfather said before dying, “I never told you, but our life is a war and I have been a traitor all my born days, a spy in the enemy’s country…Live with your head in the lion’s mouth. I want you to overcome ‘em with yeses, undermine ‘em with grins, agree ‘em to death and destruction…” (Ellison 16). After trying to find his identity through so many organizations and communities that led him astray, the narrator’s grandfather is the only solid thing that has remained constant throughout his life. During his time in New York, the narrator joins a community of men called the Brotherhood, where the unnamed narrator feels a sense of security and unity with people of his own race as they all want equality in a white world. This feeling doesn’t last long as the narrator decides that the Brotherhood is only another part of the white power system and that he needs to try to override the organization. After finding his identity of invisibility, the narrator finally finds his relationship with race and his history. 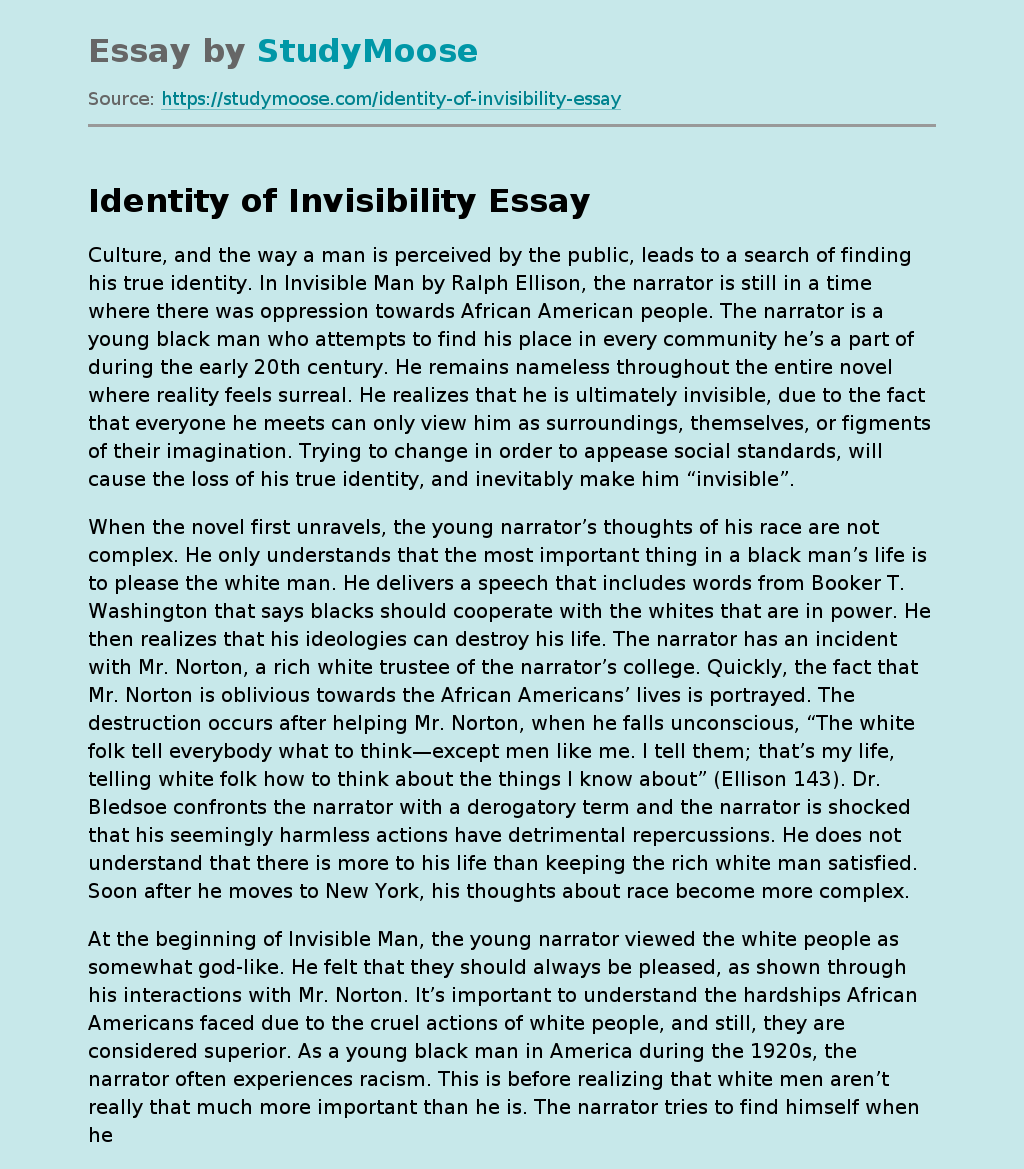