“Gone With the Wind”: The Invisibility of Racism in American History Textbooks

“More Americans have learned the story of the South during the Civil War and Reconstruction from Margaret Mitchell’s Gone With the Wind than from all of the learned volumes on this period” -Warren Beck and Myles Clowers The book Lies My Teacher Told Me was written by James Loewen. I choose to read Chapter 5: “Gone with the Wind”: The Invisibility of Racism in American History Textbooks. The chapters that I read discussed how in many of the American History Textbooks, that many young students use and read throughout their education do not discuss slavery or racism.

Don't use plagiarized sources. Get your custom essay on
“ “Gone With the Wind”: The Invisibility of Racism in American History Textbooks ”
Get custom paper
NEW! smart matching with writer

In this chapter the author stated how many books will discreetly mention slavery and the conditions of the slaves but there are no names to slave owners. He also discusses that many people get their ideals of slavery from stories such as Uncle Tom’s Cabin by Harriet Beacher Stowe and Gone With the Wind by Margaret Mitchell. With Americans using these books as their knowledge of slavery they are contradicting to each other.

Uncle Tom’s Cabin portrays the worst and most horrific conditions for slaves such as the whippings, lashings and disrespect that they would get from not only their owners but the head farm hand on the plantation.

While the book portrays the horrible triumphs that slaves went through it is a fictional book and not a biography which is not helpful because it can be hard to decipher what is truthful and what was made fictional. Gone With the Wind on the other and was also a fictional but this story painted a prettier picture of slavery for its readers.

In this book it showed that the owners cared for their slaves and treated them as if they were part of the family.

These “two books tell very different stories: Uncle Tom’s Cabin presents slavery as an evil to be opposed, while Gone With the Wind suggest that slavery was an ideal social structure whose passing is to be lamented” [ (Loewen, 1995) ]. Our history textbook discusses slavery in way that describes what drove the slavery industry, such as the development of the cotton gin and how it helped the rise of the slavery industry. In 1790 the production numbers and slave numbers were considerably lower than they were seventy years later. The slave population quadrupled while cotton production increased more than 1,500 percent [ (Gary B. Nash, 2009) ]. Our book coincides with what James Loewen says about books avoiding owners and by discreetly discussing what really happened to the slaves. While our book does go into more depth than other history books that I have had in the past, it does try to cover up some things that would be of major interest to those who want to know the truth of what slavery was really like back in the 19th century without all of the cover-ups and trying to protect the image of the founding fathers and to still keep white Americans on top. In Connecticut in the 1950s, when I was growing up, the only slavery discussed in my history textbook was southern; New Englanders had marched south to end slavery. It was in Rhode Island, where I lived after 1964, that I first stumbled across an obscure reference to local slavery, but almost no one I asked knew anything about it. Members of the historical society did, but they assured me that slavery in Rhode Island had been brief and benign, involving only the best families, who behaved with genteel kindness.

They pointed me in the direction of several antiquarian histories, which said about the same thing. Some of the people of color I met knew more. ” (Harper, 2003) In this paragraph this statement backs the fact that James Loewen stated that many northern states try to hide that there was slavery in the north, many textbooks discuss slavery in the south. The statement that was made by the historical society tries to pass off that slavery was okay because it was short lived in the state and that only the best of the best families had slave and treated them with the upmost kindness.

This is when examples of people referring to Gone With the Wind as an example of how people thought slaves were treated. “There were eight lynchings in 1937, thirteen in 1936. There were 5,000 in the U. S. since complete records began in 1882” (Black’s White, 1938). In the article I read it talked about how the legislation tried to avoid the passing the bill to stop lynching’s in 1938. In history textbooks they briefly describe lynching’s but they never say how many actually happened. This is just one more thing that proves that the history textbooks have some of the information about racism but not all that they should.

The one thing that I have found that has been consistent with history textbooks that I have read in the past, present and the articles I have researched for this topic have been that Lincoln supported the antislavery movement towards the west. “Lincoln supported the Homestead Act” [ (Lalire, 2010) ]. After reading the chapter from Lies My Teacher Told Me by James Loewen, I agree that there is not enough information about slavery in the American History Textbooks. I feel as if some people would like to just forget that slavery ever happened. Sometimes it is easier to hide things or no publicize the wrongs that we have committed as a whole.

I agree with the author that publishers are very discreet with what they will place into their textbooks. Many textbooks that go to northern school districts have very little to say about the fact that northerners also had slaves whether people want to admit it or not. Many southern states like to claim that slavery was not as disrespectful as many people say it was. I feel that even though the Civil War is over and there is no actual divided between the Union and the Confederacy, that there will always be some kind of argument between the northerners and the southerners about slavery.

There is always two opinions to every argument it’s just about who will argue their side the most and who can run circles around the other person for the longer amount of time. It is one of those topics that is to controversial to end up having one opinion, but I do agree that there is not enough about slavery in the history textbooks. If I was to present this information to 7th and 8th graders quite honestly I would be scared, I know from my stand point if someone told me that everything I had been taught so far may not be true well frankly I’d be pretty pissed.

“Gone With the Wind”: The Invisibility of Racism in American History Textbooks. (2020, Jun 02). Retrieved from http://studymoose.com/gone-wind-invisibility-racism-american-history-textbooks-new-essay 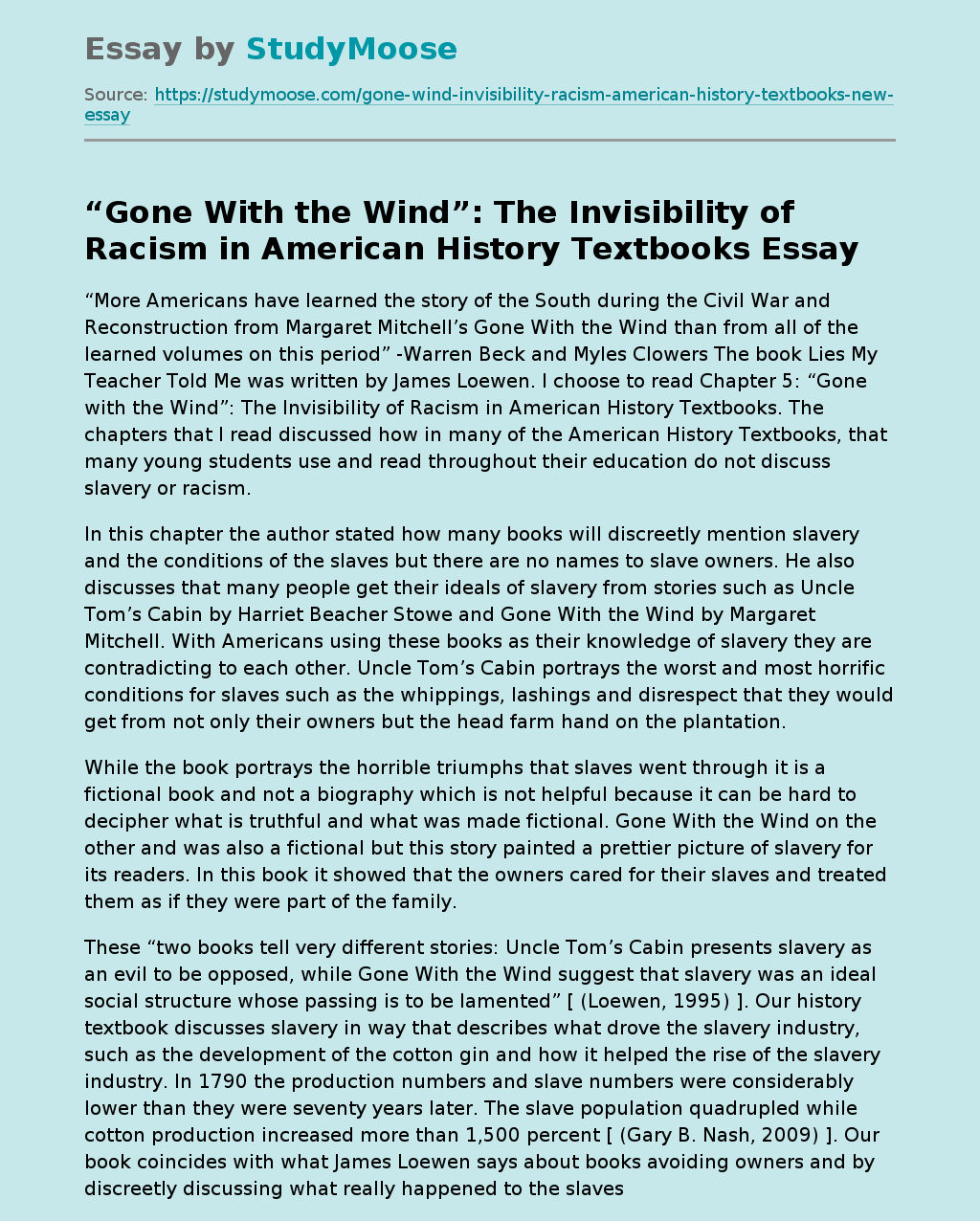