Should students’ textbooks be replaced by notebook computers?

Are you tired of carrying heavy notebooks and textbooks on a daily basis, losing your papers and reading obsolete books? Many students in high school would agree that using notebook computers would be easier, functional and efficient instead of using textbooks and notebooks. If schools would replace textbooks and notebooks with notebook computers, schools would not have to waste a lot of paper, which causes deforestation. Notebook computers would help the environment, ameliorate a student’s organization and attentive skills and they would not have to carry around heavy books on a daily basis.

Turn in your highest-quality paper
Get a qualified writer to help you with
“ Should students’ textbooks be replaced by notebook computers? ”
Get high-quality paper
NEW! AI matching with writer

According to Google, the average school spends $30,000 – $50,000 a year on paper alone. Not only are schools spending too much money on paper, but they are destroying 74 trees a year. One school alone consumes 74 trees and approximately four billon trees worldwide are chopped down yearly for loose papers, notebooks, textbooks and workbooks which is a lot considering that every day, we are losing thousands of trees that result in deforestation and abuse habitats of many animals.

Schools constantly need to update textbooks, which leads to killing many trees and can become very costly. However, if students were to use notebook computers, they would have updated resources at all times without having to hurt the environment. Students would not need to buy many school supplies like binders, notebooks, highlighters, pencils and pens when using a notebook computer which can save them money. Many students get bored in class when all they do is read old, used and boring textbooks.

Students are not even allowed to highlight or write little notes in the textbook to help them understand better because they have to keep them in good condition for the other students. Our society revolves around technology, so if we would replace textbooks and notebooks with notebook computers, students would be more interested in doing their school work because they are using something more modern instead of old and boring books.

Some people might argue that students can go on social media sites instead of doing their school word, but that wouldn’t happen because the school’s internet blocks those sites. Notebook computers would also make students more organized because they allow you to do homework without taking every single piece of paper out of your backpack and sorting through them. Students would not have to worry about forgetting something at school or in
their locker because everything would be stored in their notebook computer.

Carrying a bunch of textbooks and notebooks everyday home from school can be very tiring considering that students in high school do not take a school bus home or get a ride home, but walk and/or take public transportation to get home. “Half of all children suffer back pain by the age of 14 and doctors are reporting a rise in cases of spinal abnormalities in pupils, including disfiguring curvatures known as scoliosis.’’-John Stevens. Students are practically forced to bring their heavy textbooks home or else they can fail their specific assignment, which is insane because many students are suffering from back pain on a daily basis and can even get a spine disorder known as scoliosis at a very young age. If we were to replace these heavy textbooks, workbooks and notebooks with notebook computers, students would be going home with laptops that do not weigh nearly as much as an entire backpack full of textbooks. Lighter backpacks result in fewer back problems for teens that need to take home materials for multiple subjects each night.

Should students’ textbooks be replaced by notebook computers?. (2016, Mar 20). Retrieved from https://studymoose.com/should-students-textbooks-be-replaced-by-notebook-computers-essay 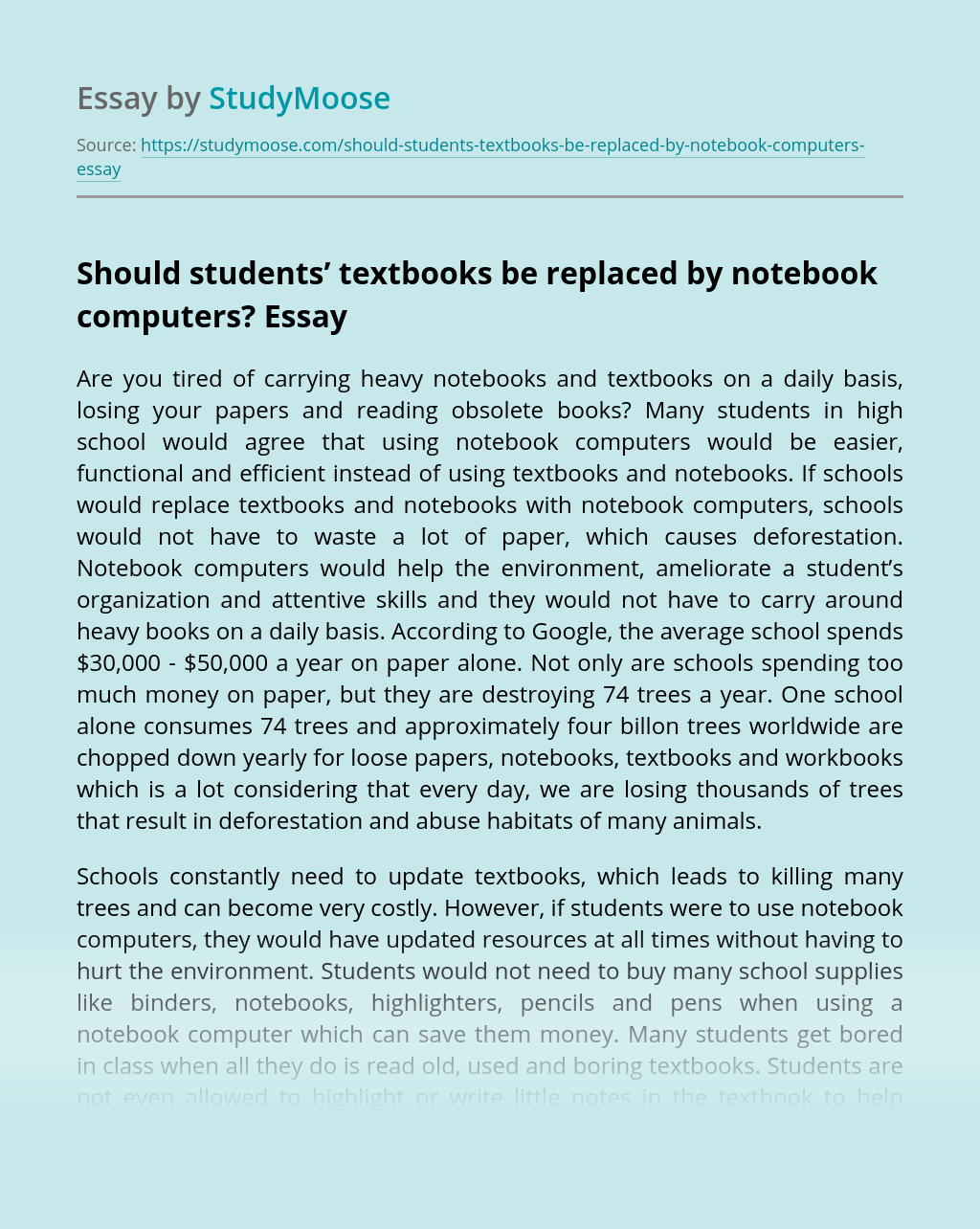 Turn in your highest-quality paper
Get a qualified writer to help you with
“ Should students’ textbooks be replaced by notebook computers? ”
Get high-quality paper
Helping students since 2015
Stay Safe, Stay Original