The story begins with Duke (Old Noah) and Allie in a nursing home. Duke goes to Allie’s room and begins reading to her a story that started July of 1940 at a Carnival in Seabrook, South Carolina. Noah and Allie meet for the first time and Noah falls instantly in love but Allie is not that quick. Noah and Allie are thrown together by mutual friends Fin and Sara. Allie, Noah, Sarah and Fin go to a movie and Allie and Noah walk home together and that is when the romance picks up.

Turn in your highest-quality paper
Get a qualified writer to help you with
“ The Notebook Analysis ”
Get high-quality paper
NEW! AI matching with writer

Allie falls for Noah. Allie and Noah spend almost every waking moment together, they fight they make up.

One night Allie goes to Noah’s house and Noah decides to take Allie to the Windsor Plantion where they almost make love but are interrupted by Fin who tells them that Allie’s parents have the police out looking for her then they go back the her house and Noah over hears her mother calling him trash and goes to leave.

Proficient in: The Notebook

Allie runs out after him and they end up getting into a huge fight and break up. Allie and Noah lose touch and Noah and Fin go off to War while Allie goes to school and volunteers to nurse injured soldiers back to health. Fin dies during the war.

While Allie nursed a soldier named Lon Hammond Jr. and he asks her out. Lon won Allie over quickly and proposed to her. When Noah returns home from the war he finds out that his father has sold their home so that he can buy the home that he had always wanted to buy and fix up.

While Allie is trying on her wedding gown she sees a picture of Noah in the paper next to the house he had told her all about and she decides that she needs to go check on him. She goes back to Seabrook. She drives to Noah’s home and they have dinner and Noah asks her to come back the next day.

She comes back the next day and they row out in the lake, they talk about the summer that they spent together and it begins to rain. Noah quickly rows back to the dock where Allie demands to know why Noah never wrote her and it is revealed for the first time to her that he had written her every day for a year. They kiss and make love well into the night. A few days later her mother arrives on Noah’s door step and tells Allie to get dressed and come with her. She reveals something about herself and how much she is like her daughter.

On the way back to dropping Allie off they see Lon’s car waiting at the hotel. Before leaving Allie’s mother tells her that Lon is waiting for her at her hotel room and then gave her the letter that Noah had written him. Noah begged Allie to stay with him but Allie said that she had a fiance waiting at the hotel that she owes an explanation to. Allie leaves and is crying she pulls off to the side of the road and reads one of the letters that Noah had written her. She goes to Lon and confesses everything they talk and it goes back to the present with Old Allie and Old Noah.

They talk and as she is realizing what is happening it flashes back to Young Allie standing on Noah’s doorstep with her bags. Old Allie and Old Noah embrace each other while she briefly remembers who she is but it passes quickly and starts freaking out and this is too much for Noah who also breaks down. The next morning Noah is found unconscious and is rushed to the hospital. He is later returned to the nursing home in ICU and sneaks out of his room to be with Allie. Allie remembering who she is and who Noah is talks and asks if love can do anything.

The next morning a nurse finds Noah and Allie holding hands having passed away in the night. This story is in a non-linear form. This means that it does not follow in a chronological order. This is because the scenes go back and forth between the present and the past. The main character Duke (old Noah) uses a notebook to tell the story of his and Allie’s life together. There is an external conflict that takes place with Noah. Noah is conflicted because he wants Allie to remember him and their life together but she is having trouble because she has dementia.

There are a couple of different times in the film that this conflict is resolved, the first time is when Noah finishes reading the story and Allie briefly remembers him. The second time that the conflict is resolved is at the end of the movie when Noah sneaks in to Allie’s room and she remembers him before the die together. The first major universal truth that this movie address is that true love never fades. This is addressed when Noah and Allie meet again after several years of being a part. They picked back up where they left off despite all the years that had went by that they had been a part.

The second major universal truth that this movie address is that true love conquers all. The movie shows this because it is Noah’s love for Allie that keeps him at the nursing home despite her lack of memory of him and their children’s requests for him to come home. It is their love for each other that brings Allie back to him and makes her remember him. Lastly it is their love for each other that keeps them together until the very end and what takes them away together. This movie fits most closely under the romantic comedy genre of film. I think that it falls under the genre film category because the characters are asy to identify and the story line is easy to pick up on and follow.

These are the main characters in this film. These actors are interpreters for this film because they are acting for a movie that is based off of a book. They are acting in the way that they believe that the book was written and the way that they believe that they should be seen. They are acting in a realism way. I would attribute very little of their performance to the director. The way that Noah (Ryan Gosling) and Allie (Rachel McAdams) interact with each other shows how much they care about each other in the film. Most of the mise en scene is of the characters present and small amounts of their surroundings.

The majority of the lighting is high-key lighting although it does vary depending on the scene. There are a few scenes that are in black and white such as the scene where Allie and Noah die. For the most part, however, the scenes are in saturated, or vibrant color. The camera angles and distances vary from close up to distant shots. The scene of Noah hanging from the Farris Wheel when Allie pulls down his pants cuts to a long shot. The scene of Noah and Allie taking their clothing off are close up shots where you see only from the shoulders up.

All three sound techniques are used in this film, sound effects, music, and dialogue. The most noticeable sound effect takes place in the scene when Noah and Fin are fighting in the war and you hear gun shots. There is one song played a couple of times in the movie called: I’ll Be Seeing You. The majority of the dialogue takes place between Noah and Allie. The following is an example of a conversation between Allie and Noah after having spent a few days together before she was going to speak with Lon. “Young Noah: It’s not about following your heart and it’s not about keeping your promises. It’s about security. 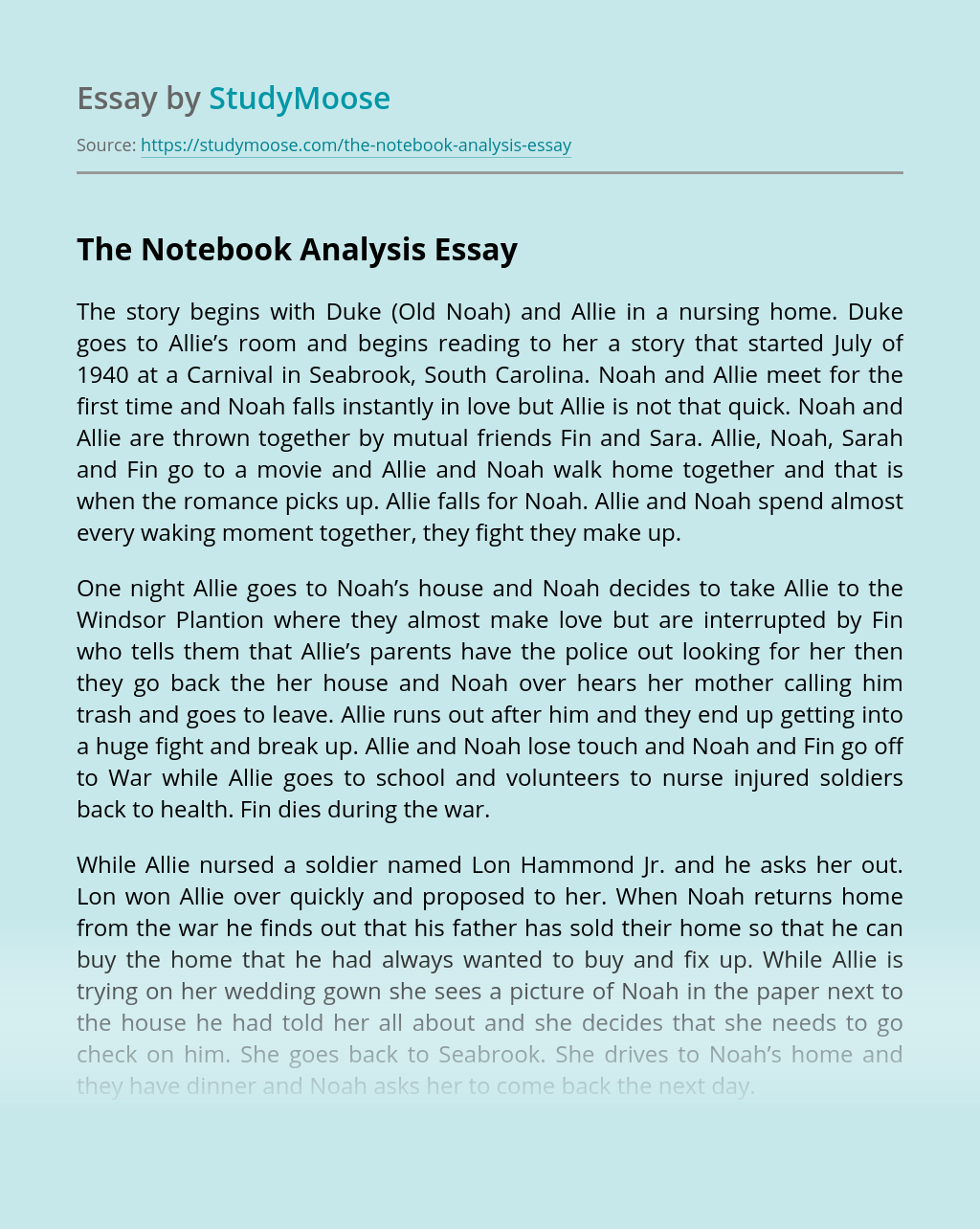 Turn in your highest-quality paper
Get a qualified writer to help you with
“ The Notebook Analysis ”
Get high-quality paper
Helping students since 2015
Stay Safe, Stay Original