2. Problem building: Theoretical point of views used to elaborate on the problem

3. Issue building and construction: Uncertainties fundamental in the concern

Cultural Imperialism – Violation of Islam values- Westerners criticize what they do not comprehend, it may not be right to slam Ikea’s behaviour

Definition of the Ethical issue

Ikea, the international furniture company, edited women from their Saudi Arabia’s catalogue. This action is deemed ethically inappropriate, as it seems to support gender inequality, which goes against Ikea Group and Sweden’s values. (Quinn, 2012) Some may argue that Ikea was submitting to pressure from the conservative Islamic state while others say that Ikea was just respecting and being understanding towards Saudi Arabia’s cultural standards. This media coverage aptly reflects the pervasive ethical business challenge faced by globalized companies, where it is difficult to find a balance between international commercial behaviour and localization of marketing communications. Moreover, this issue could lead to further ethical implications such as cultural imperialism, which will be discussed further.

Theoretical Perspectives to Elaborate on the Issue

Under the egoism approach, Ikea’s decision is justifiable as the move to satisfy Saudi monarchy’s gender segregation rules (Kayyem, 2012) could be seen as an act of self-interest to garner business support in a male-dominated society. On the other hand, Ikea may have also thought that it is an ethical action to be sensitive to women’s rights in Saudi Arabia and conform to them.

On the basis that following the view of the majority will produce the best consequence, Ikea’s action is unjustifiable as its action is against the values of Ikea, Sweden and even United Nations (United Nations Millennium Goals). Ikea’s act has thus garnered many bad press and negative reaction from the general public. It has also worsened its own brand image and reputation in the globalized economy.

Ikea’s actions are in accordance to moral rules dictated by the Sharia council as women’s rights in Saudi Arabia is largely influenced and defined by Islam and tribal customs. However, this conflicts with the moral principle of rights stating that, “ All human beings are born free and equal in dignity and rights.” (Article 1 of the Universal Declaration of Human Rights)

In this final approach, the justification of an act depends on the prevailing norms of the society. In Saudi’s advertisements, women only appear infrequently. (Quinn, 2012) It is not unusual to see censors blacking out many parts of a women’s body in imported magazines. Thus Ikea’s actions will be deemed acceptable to the conventional approach of advertisements in Saudi Arabia.

From the different theoretical perspectives above, it clear that the moral rules and principles that Saudi Arabia follows is different from the rest of the world. Thus it really boils down to which values do Ikea chooses to uphold.

Uncertainties Inherent in the Issue

(a) Business ethics and corporate social responsibility Being a globalized business, Ikea will be constantly dealing with business ethics issue such as the search for universal values for international commercial behaviour. For example, when you adapt your business practices to the country’s customs, cultural values and legal requirements, it might be seen as unacceptable in your home markets. (Baker, 2012) Vice versa, if Ikea were to release an unaltered version of the catalogues in Saudi Arabia, would there be a backlash in the Muslim community? This business uncertainty remains a challenge to international companies.

Furthermore, there are many misconceptions in the West about women’s life in Saudi Arabia (NAFJAN, 2012). Western critics towards women rights in Saudi has “failed to understand the uniqueness of Saudi Society”(Zoepf, 2010) and thus should not inflict western values or lifestyles on the Saudi Arabians said journalist Maha Akeei, a frequent critic of Saudi’s patriarchal customs. (Hiel, 2007) Since Westerners criticize what they do not understand, it might not be right to criticize Ikea’s behaviour when Ikea is being sensitive to their culture.

While the reason why Ikea decided to steer away from their progressive Swedish values at home is unclear, it is difficult to ascertain whether the issue was ethical as mentioned earlier.

(a) Ikea as a corporation & its employees

Ikea has always been a brand conscious company who has an image that cares about sustainability and its moral values. The company is named one of the ‘World’s Most Ethical Companies’ for the fourth consecutive year in 2010. (PRNewswire, 2010) However, the fact that the company could betray the company’s values at the drop of a hat, have disappointed many of its customers. Even though Ikea was quick to apologise, its actions already has negative repercussions on its reputation and credibility. (Knowledge@Wharton, 2012) Therefore, it is imperative for the company to adopt an international guideline for its employees to follow to better deal with such dilemmas in the future. The company continued: “We are now reviewing our routines to safeguard a correct content presentation from a values point of view in the different versions of the IKEA Catalogue worldwide.” (Quinn, 2012)

(b) Ikea’s local and global customers

Moreover, many Swedes were offended by Ikea’s decision, believing that the deletion of women from the Saudi catalogue portrayed their country as being “gender unequal.”(Vasic, 2012) Global customers who are supporters of women’s rights will also think less of Ikea and be less loyal towards Ikea.

Even though Ikea is a private company, it inevitably projects an image of Sweden around the world. (Swedish equality minister Nyamko Sabuni, CBC News, 2012) An article of the Swedish Institute also further substantiates that “Ikea is doing more for the image of Sweden than all governmental efforts” (Wästberg, O., 2009). As mentioned, Ikea’s decision might have portrayed Sweden as being gender unequal, thus it is important for Ikea to uphold Sweden’s image, as it is a corporate representation of the country.

In all, Ikea’s reputation has taken a toll and should operate with the right values expected from its customers.

Based on the ethical theories of egoism, conventional approach and moral rules in Saudi Arabia, Ikea’s actions are deemed ethical while based on utilitarianism and principles of rights, their actions are deemed unethical. While one can never satisfy everyone, it is important that Ikea stands by its values in all circumstances, (i.e. sent the original Swedish version of the catalogue to Saudi Arabia) especially when it involves a violation of human rights, (Knowledge@Wharton, 2012) to send the correct message to its consumers target. While there might be nuances of cultural imperialism when different stakeholders criticize Ikea’s actions, it once again boils down to understanding both cultures fully before making a stand.

To recapitulate, through globalization and communications revolution, it is inevitable for companies to face ethical and cultural conflicts. Ikea reflects the realistic marketing choices confronting many globalized companies around the world, with the companies not hesitating to localize their marketing communications though it is against the company’s code of conduct. While Ikea’s motive remains unknown, it has apologised nonetheless. This lesson learnt serves as a corporate red light to Ikea to take cultural marketing issues more seriously and to act in the interest of its stakeholders as it serves an indirect representation. Also, exactly how to reconcile localization with a universal ethics code, however, will remain a challenge for Ikea as well as other corporations. 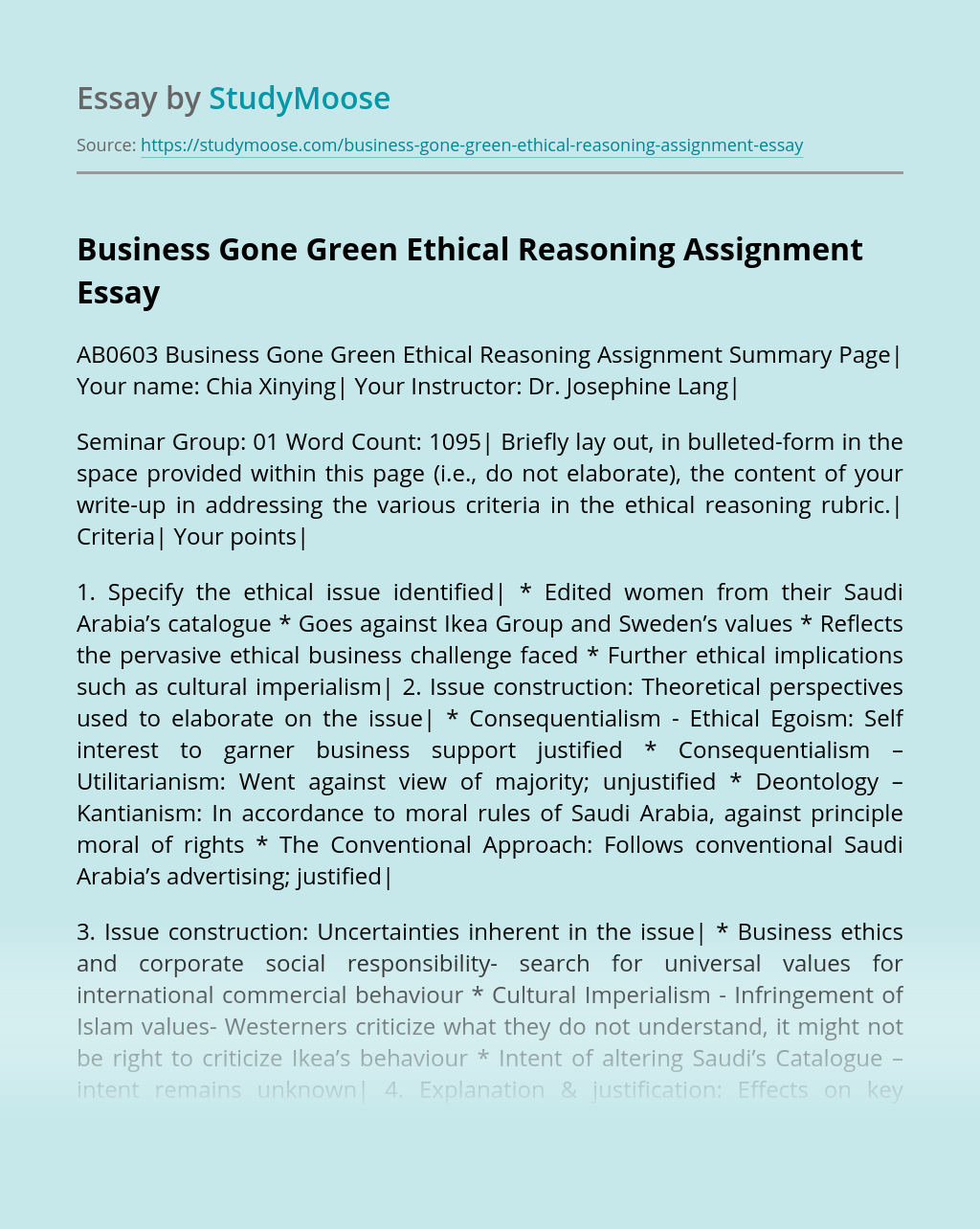 Turn in your highest-quality paper
Get a qualified writer to help you with
“ Business Gone Green Ethical Reasoning Assignment ”
Get high-quality paper
Helping students since 2015
Stay Safe, Stay Original