Violence has a major impact on teenagers and children in today’s society. In the novel A Long Way Gone; memoir by a boy soldier Ishmael Beah, displays how teenagers are exposed… Through the medias they are showed that the movie Rambo, which influences them to be violent and fight. Another way to seek violence is in real life when the boy soldiers are sent to fight the rebels. The violence that the young boys are exposed to caused them to think and act violently towards others,

Firstly the boy soldiers in this novel are influenced by the movie Rambo , it encourages them to work harder and more violent.

Don't use plagiarized sources. Get your custom essay on
“ A Long Way Gone Novel Analysis ”
Get custom paper
NEW! smart matching with writer

After the young boy soldiers watch Rambo for the first time they were motivated to be just like him and while in battle. “We all wanted to be like Rambo ; we couldn’t want to implement his techniques” (beah 121). This movies showed the boys how to fight , they wanted to use the same techniques to fight against the rebel villages.

Proficient in: A Long Way Gone

Some of the boy soldiers have been so influenced by this that they already implemented goals that will allow them to act like Rambo; “sometime I am going to take on a whole village by myself, just like Rambo” Alhaji told me smiling at the new goal he had set for himself” (122). This young boy has been trained to fight and destroy, watching Rambo has influenced him so much that he wants to take a whole village on by himself. Watching violent movies influences the boy soldiers how ever this is not how they gain courage and experience.

Secondly the boy soldiers are able to gain courage and experience by being sent to fight against the rebels. The boy soldiers are brought to fight after being trained, they are told; “if you see anyone without a head tie of this colour or a helmet like mine, shoot them”(115). The boys didn’t know that they are actually going to battle however they do know what they have to do when they are in the field. When they are in the battle, the boys watch their friends get killed, this empowers them to fight back and kill; “I raised my gun and pulled the trigger , and I killed a man… I shot everything that moved”(119). After watching his friends get killed Ishmael starts to fight back, he is saddened by what has happened to his friends and wants to have revenge on the people that caused their death . when the boys
are in combat they gain the courage to fight back and kill people. The violence they are exposed to influenced them to act violently them selves. 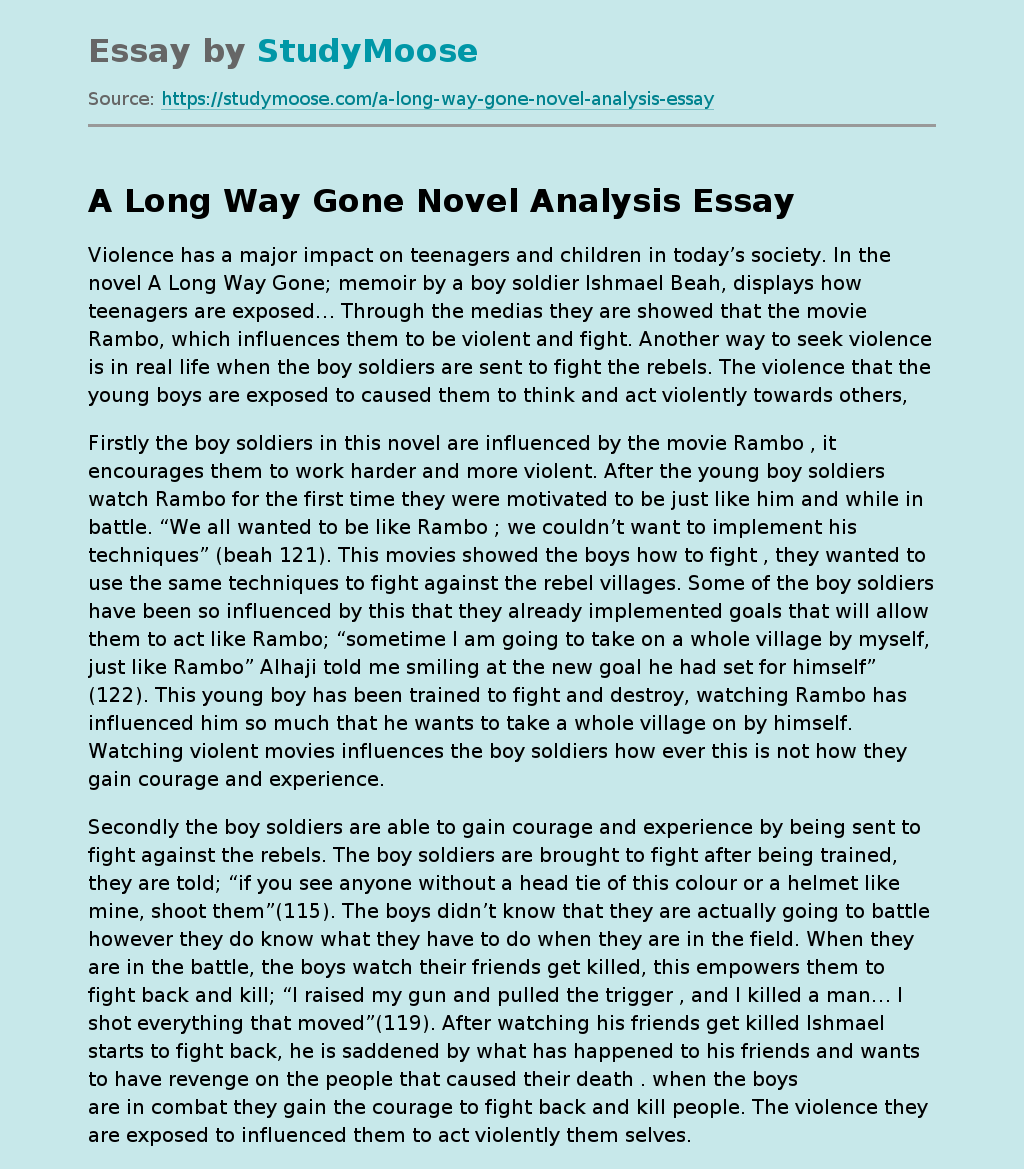