Communication plays a very important role in an organisation. In fact, it is said to be the lifeline of the organisation. In totality, communication in an organisation is very complex and needs to be correctly managed, handled and monitored to avert chaos, crisis or conflict. The success and downfall of an organization has a significant link and attachment to communication as the strength, base and foundation between employees and employers such that through communication models that act as vehicles, the corporate sphere is fully equipped by way of addressing crisis management, organizational success and also in respect to employee and employer relations.

Perkins (2010) states that since communication is very crucial and unavoidable, in managerial or business context, it is the science and art of communicating. Etymologically, communication as a word is derived from the word common in english or communis from Latin.

It means shared by, or concerning all (Stevens, 1950). Thus communication is a process of influencing others to achieve common, shared objectives. These goals could be that of individuals, families, teams, departments, functions and companies.

To a certain extent, two-way communication process can occur only when there are at least two individuals. One person has to convey some message and another has to receive it or in this case he/she will be the recipient. Berlo (1960) cites that the receiver need not necessarily be an individual, information may be conveyed to a group of persons collectively similar to that in an organization.

Communication methods are noted clearly in the case of which is situated in the south eastern part of. Since it is a huge organization with over 15 000 employees, there is a notable existence of a two-way communication process. Taking into account the Osgood and Schramm’s Circular Model of communication which has an impact to the organization performance.

Osgood and Schramm’s Circular Model of Communication was an attempt to rectify the earlier linear models of communication. Schramm (1948) stated “It is misleading to think of the communications process as starting somewhere and ending somewhere. It is really endless. We are little switchboard centers handling and re-routing the great endless current of information”. From the scholars view point, the Circular model is devoted to two actors who reciprocate in identical functions throughout, encoding, decoding, and interpreting. The model presented by Osgood and Schramm shows not only the transmission and hearing of a message, but offers explanations in how it can be perceived and understood.

The process of understanding what has been said can vary widely from person to person as there will always be a degree of semantic noise to be taken into account. On an organizational perspective disagreements are inevitable, but where there is a transmission of information which has feedback, problems and differences such as cultural differences, background, socioeconomics, education and values can be solved amicably (Schramm, 1948.) At Hippo Valley Estates there is the presence and existence of an Upward type of communication which invites mutuality such that employees inform management about the situation on the lower levels signifying that employees have a direct link of communication encompassed with feedback with their superiors unlike the instance of a Downward type of communication whereby the superior impose a militant dictatorship spirit with no likelihood of a mutual feedback, an act which is an extremely authoritative style of management (Terry, 1974).

Dialog and the existence of feedback is also shown through the facilitation of trade unions, works councils and workers committees in settling and exercising a collective bargaining approach on issues of any nature as seen between and its employees hence feedback is the main component of communication process at the above mentioned organization as it permits the sender to analyze the efficacy of the information or issues which may have
arose.

One-way process is influenced by the Linear model which does not recognize the importance of feedback as an aspect of paramount importance in the scenario of an organisation that advocates for mutuality and of a sound relationship (Wood, 2009). The Mathematical or Linear Model of Communication is a model that suggests communication moves only in one direction.

The operation of a one-way process in an organization results in reduced employee morale. This dissatisfaction can translate into higher employee turnover and recruiting and training costs, as well as a higher likelihood of strikes (Brown, 1965). Two-way communication to a certain extent helps the smooth running of industrial affairs between the management and employees. Terry (1974) states that “Communication serves as the lubricant, posturing for the smooth operations of the management process.In managerial terms, the process of communication is espoused to the concept that of conception, encoding, transmission, decoding, interpretation and above all feedback which the recipient responds back to the sender (Lesikar et al,2006).

Robinson (1991) says that when communication flows in all directions, people tend to like their jobs better. And there is strong evidence of morale being highest in organizations that listen to people and act on what they hear. Two-way communication establishes, over time, a climate in which people can raise issues freely and ask the kind of questions that clear the air. It paves the way for building confidence and trust, as opposed to one-way communication where there is no freedom of association such that fear prevails and people will concentrate on avoiding mistakes rather than achieving goals (Perkins, 2010).

When an organization enjoys this free-flowing environment, people may not agree with changes or decisions, but with a track record of understanding the “why” behind events, they are more likely to accept them. In the case of, two-way communication plays a strategic role in complementing company goals by assuring that employees have a clear understanding of these goals, by way of an open door policy and allowing them to take action and make decisions accordingly as opposed to the one-way approach whereby information is delegated without space for a response or contribution.

The one-way communication model to a lesser extent demonstrates its nature and dominance through its lack of feedback and its relevance in numerous real life situations such as in churches, lecture situations in and military which is to a certain extent is the best fit for that particular scenario as opposed to the situation of where there is a free flow of information and communication channeled up until it reaches its pinnacled by the existence of a free dialog, heart to heart interactions built on mutuality such that issues and disputes are handled and settle amicably in a free and fair harmonized fashion.

Perkins, P.S. (2010). The Art and Science of Communication: Tools for Effective

The University of Illinois Press.

Stevens, S. S. (1950). A definition of communication. The Journal of the Acoustical.

Academic Press, 1991 the University of Michigan 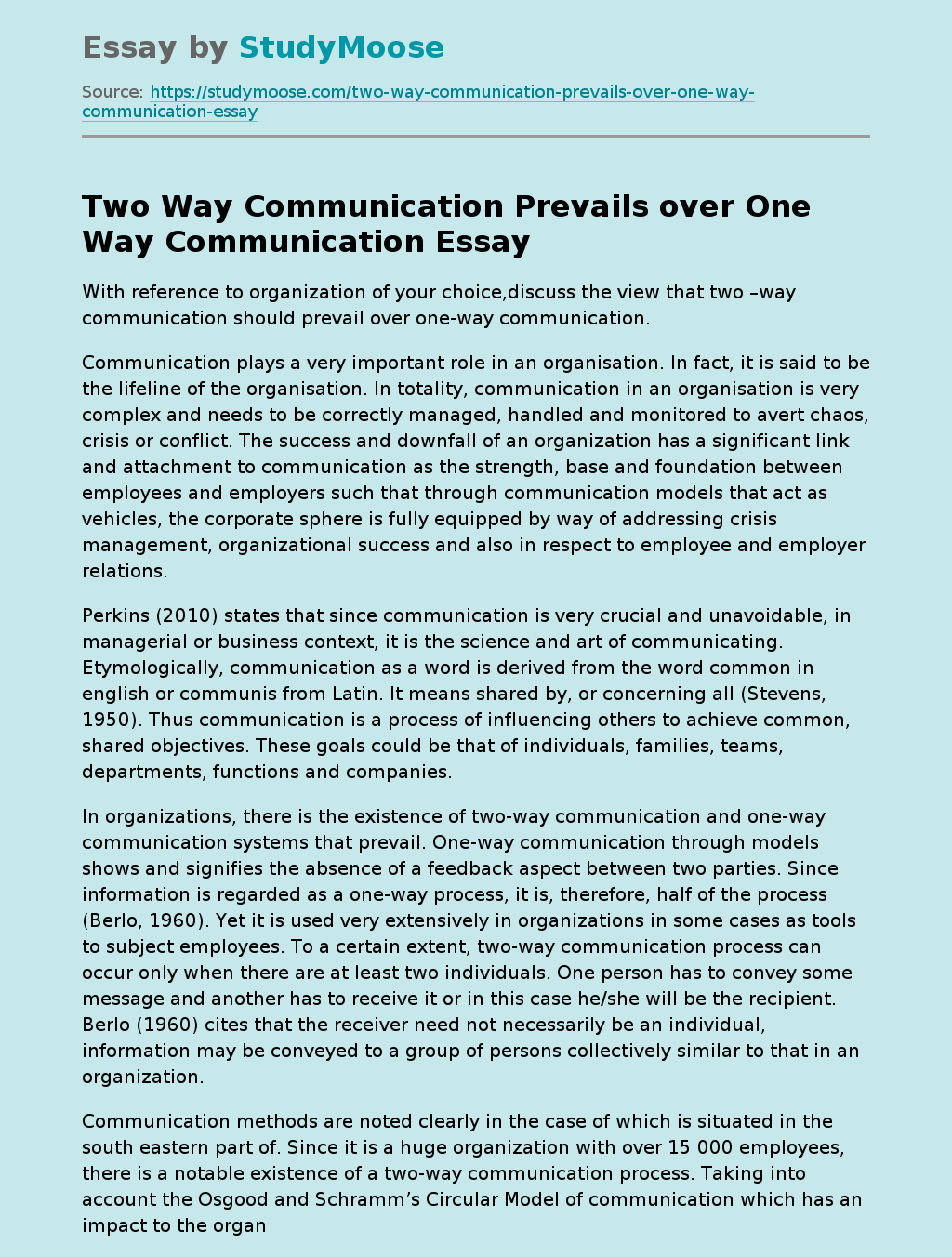