Comparison of Two Texts, “One Flew over the Cuckoo’s Nest” and “to Kill a Mocking Bird”

How do the authors of To Kill a Mockingbird and One Flew over the Cuckoo’s Nest use literary techniques to explore the concepts of isolation?

Isolation and courage in the form of racism and discrimination is an analogous concept explored in Harper Lee’s novel To Kill a Mockingbird and Ken Kesey’s novel One flew over the cuckoo’s nest. The authors exemplify the conflicts of isolation displayed by the protagonists and glorifies a broad range of literary techniques to foreshadow the ideas contrasted within the novels.

Don’t waste time
Get a verified expert to help you with Comparison of Two Texts, “One Flew over the Cuckoo’s Nest” and “to Kill a Mocking Bird”
Hire verified expert
$35.80 for a 2-page paper

Discrimination and racism of isolation are explored in both novels. Harper Lee’s novel To kill a mocking bird displays the isolation of racism within the conflicts of the protagonist, whilst Ken Kesey’s, One flew over the cuckoo’s nest discriminatory isolation within the social, cultural and historical values of society.

Harper Lee’s Novel “To kill a mocking bird” was published on July 11th 1960; this during a time of racial discretion making the novel such a controversial text. To kill a mocking bird illustrates isolation in the form of racism, displayed by the main conflict of the novel; thus demonstrating the involvement of isolation within the text. This involvement of isolation is foreshadowing the idealism of the characters within the text, evoking the reader perception to be controlled by the author.

This isolation is demonstrated with the case of Tom Robinson being accused of rape due to his racial skin colour. This racial form of isolation is present within modern day society, within social values. You aren’t really a nigger-lover, then, are you?”, “I certainly am. I do my best to love everybody… I’m hard put, sometimes—baby, it’s never an insult to be called what somebody thinks is a bad name. It just shows you how poor that person is, it doesn’t hurt you.” (11.107-109).

Racial isolation is a historical connection positioning the reader to reconnect to events within our own history . “Well if we came out durin’ the Old Testament it’s too long ago to matter”, “That’s what I thought,” said Jem, “but around here once you have a drop of Negro blood, that makes you all black.” (Line, 16, Page, 78-81) This quote illustrates the questioning of the reasons for racism within society and referrers back to religious beliefs of equality. As children trying to digest a reason just because it is stated by society is almost an impossible feet. The relationship formed between Tom and the reader throughout the story allows the reader to sympathise with his circumstances. Social Statues of Kesey’s One Flew Over The Cuckoo’s Nest delivers the social ranking of society within the ward. Racial discrimination of modern day values is brought upon within the aspects of the ward.

The head nurses are of ethnic skin colour whilst the boys below that clean the ward and look after the patients are of black skin colour. The author reflected the discrimination of social statues in the ward as it is in society, this positions the reader to see the valued connections and perceptions being delivers by the author. This discrimination also occurs within Lee’s To Kill a Mocking Bird. Tom Robison is on trial for case not committed, but has been accused because he is a large black man. Within the course of this novel the reader recognises the traits of innocence within all characters , as the course of the novel proceeds the innocents of all characters fades, connection to the overarching metaphor “to kill a mocking bird”, therefore to kill the innocents of the characters .

Kesey and Lee both use the characters to annotate the social issue of isolation within society. Ken Kesey’s One flew over the cuckoo’s nest was written during 1962. 1962 was known as the freedom summer, which developed the fight for civil rights among black people in the US and worldwide. This historical setting of One Flew Over The Cuckoo’s Nest influenced the ideologies throughout the inscription of this novel. Ken Kesey developed his conceptual ideas of isolation through the setting of the characters. These concepts are developed through the protagonists, B Randle Patrick McMurphy and Nurse Ratchet. McMurphy challenges all aspects of rules and regulations within the psychiatric ward. McMurphy’s rebellion forces the reader to observe his understanding of insanity.

The ward is a metaphor of a social statement being made by the author, perceiving society as the same as the ward; controlled, under authority and McMurphy is an example of chaos, change, and hope for the patients within the ward itself. “I hide in the mop closet and listen, my heart beating in the dark, and I try to keep from getting scared, try to get my thoughts off someplace else-try to think back and remember things about the village and the big Columbia River” , (chapter 1, lines page, 121, line 23). McMurphy’s actions throughout the novel are foreshadowed thus positioning the reader to question if he’s truly insane “And the third boy mutters, “Of course, the very nature of this plan could indicate that he [McMurphy] is simply a shrewd con man, and not mentally ill at all.” Chapter 2, Line.1, .Page 32-37). The relationship between nurse Ratchet and McMurphy is a vivid display of modern society and underling compressed issues. McMurphys constant display of rebellion indicates the social connection between modern society and inheritance of the ward. Kesey expresses his ideologies of social society of both locations by the narration of Chief. “Good morning, Miss Rat-shed! How’s things on the outside?”, “You can’t run around here-in a towel!”, “No?” He looks down at the part of the towel she’s eye to eye with, and it’s wet and skin tight. “Towels against ward policy too? Well, I guess there’s nothin’ to do exec-“, “Stop! Don’t you dare. You get back in that dorm and get your clothes on this instant!” (1.8.42-55) This quote illustrates the rebellion of McMurphy and the frustration of disruption of Nurse Ratchet. McMurphy’s actions contrast the ideas of the reader positioning the reader to see the value behind his rebellion. Courage within One flew over the cuckoo’s nest and To kill a mocking bird is a widely represented theme delivering the incandescent philosophies displayed through the character relationships. Within Kesey’s novel Chief Bromden foreshadows the example of courage. The silence of his character is a representation of his voice within the novel.

Chief a schizophrenic notices the fabricated world of the ward; he is a personal protagonist within the text. Chief is recognised as a man with lost intelligence and ability to function by the patients of the ward. This secret is broken from the authority of the ward by the rebellion of McMurhpy. Chief is foreshadowed by the symbol of a broom; this demonstrates his ideas of the ward being a place to distress any form of rebellion within modern society. McMurphy is therefore a juxtaposition of the broom and what it stands for, illustrating chaos and the cure to the patients. The Symbolism of Kesey’s novel allows the reader to gain a vivid view of the philosophies that are foreshadowed by the author through the characters. These ideas evoke reliability with the reader, thus positing the reader to connect the philosophies of Chief with the character personality of McMurphy. One Flew over the Cuckoo’s Nest is a novel that illustrates the struggles towards sanity by chief. His narrations of the novel display his hardship and philosophies of McMurphy and Nurse Ratchets roles within the novel and the analogous connections within society during the 60’s. Chief illustrates his courage towards the reader through his silence through the course of the novel.

Literary techniques in both texts are the basis of foreshadowing philosophies and ideas that are put forth to the reader by the authors. Imagery is vivid illustrated within One Flew Over the Cuckoo’s Nest. Fog is resented as an alluded authority that restores isolation within the ward. The fog is only vivid to Chief, thus the author uses this to forces the reader to interpret the ideas of the author, evoking a sympathetic tone. The mocking bird within To Kill a Mocking Bird is an overarching metaphor and motif. The metaphor symbolises innocence and purity, thus the innocence of Tom Robinson in his racial discriminatory rape case, or the purity of the children within a small social town. “You never really understand a person until you consider things from his point of view . . . until you climb into his skin and walk around in it” Chapter 1, Page 30. The children are exposed to the event of Tom; as the text carries on the children begin to question the motive of the case and the social contention its making. This metaphor induces the political statement made by Lee, positioning the reader to connect the social, cultural and philosophical issues to modern day society.

Tone is an important aspect of these texts. Tone allows the author to let their ideas be identified by the reader, this positioning the reader to forebode the events of the text. Kesey’s One Flew over the Cuckoo’s Nest enables the sympathy of the reader; a sympathetic tone shows compassion felt by the author towards the patients and illustrates the humanity and dignity still apprehended by the patients. The tone displays the perception of truth by the patients; although they are restrained they still obtain freedom to go when pleased. The tone represented within Lee’s, To Kill a Mocking Bird is also sympathetic to the forms of isolation positioning the reader to recognise and relate the isolation within social aspects of society.

Symbolism is an important literary technique that displays the depth of a text and the connections of symbols to the protagonists. Kesey uses the idea of keys as a statement of authority by the nurses. This authority is therefore broken by McMurphy when he steals the keys, this positions the reader to connect the ideas of isolation towards society and the forms of rebellion that are associated. Lee uses the mocking bird as a metaphor but also a symbol within his text. The bird represents freedom of oppression by trusted aspects of society. The oppression of political and racial analysis is broken by Scout. Scout questions the narrow philosophies and values of society; Lee uses the character of scout to make a social statement of the values of oppression within all aspects of society. This use of symbolism position the reader to question the morality of society and its racial opinions formed.

Isolation and courage in the form of racism and discrimination is explored in Harper Lee’s novel To Kill a Mockingbird and Ken Kesey’s novel One flew over the cuckoo’s nest. Isolation is explored within the main themes, techniques and symbolism of the texts. The social, historical and cultural settings and connections provide the reader with an understanding of the philosophies and ideas presented by the author displaying isolation through the protagonists, settings and literary techniques.

Comparison of Two Texts, “One Flew over the Cuckoo’s Nest” and “to Kill a Mocking Bird”. (2016, Mar 23). Retrieved from http://studymoose.com/comparison-of-two-texts-one-flew-over-the-cuckoos-nest-and-to-kill-a-mocking-bird-essay 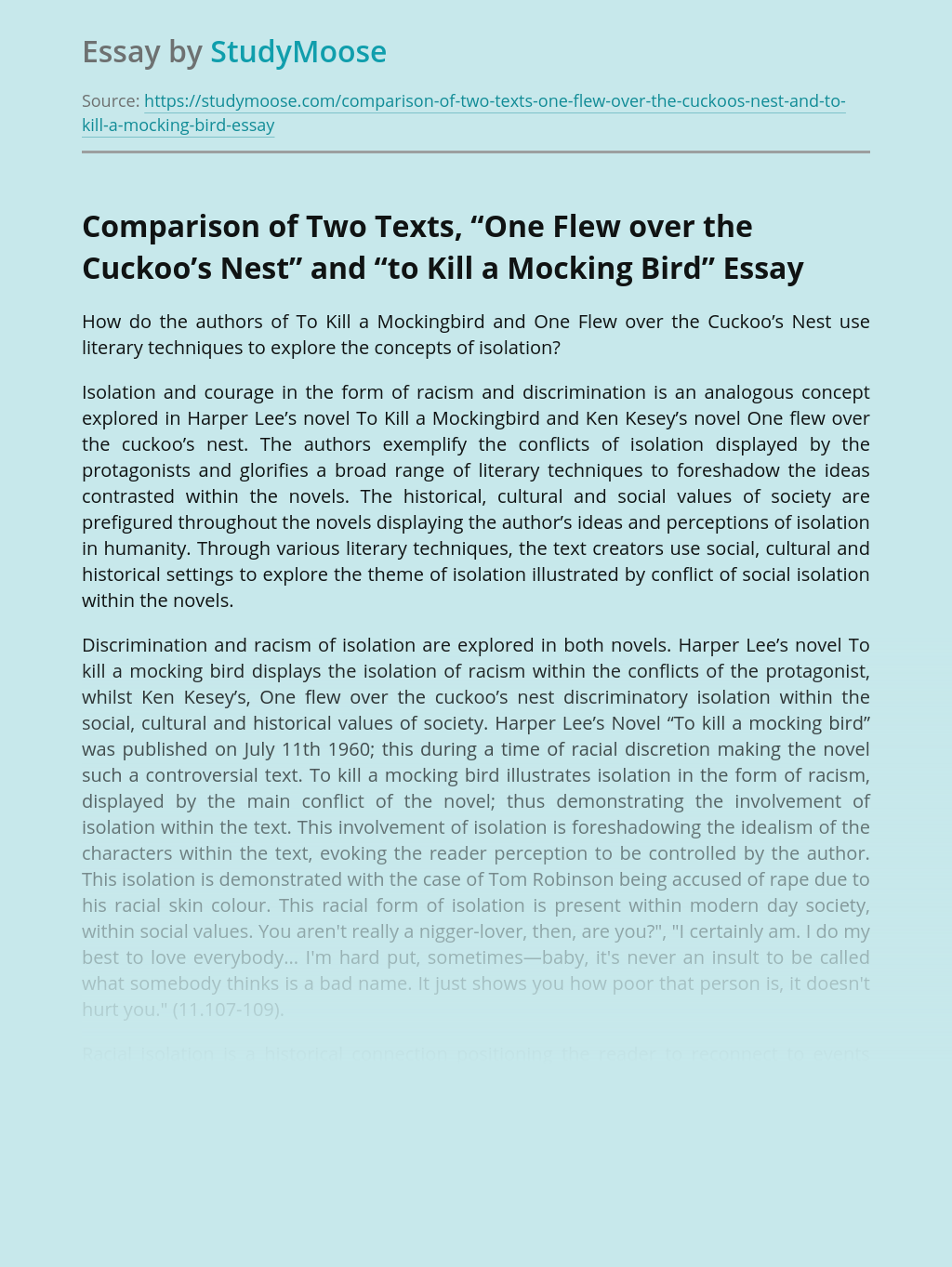 Don’t waste time
Get a verified expert to help you with Comparison of Two Texts, “One Flew over the Cuckoo’s Nest” and “to Kill a Mocking Bird”
Hire verified expert
$35.80 for a 2-page paper
Stay Safe, Stay Original