Psychological Analysis of the "One Flew Over the Cuckoo's Nest"

The release of Ken Kesey’s “One Flew Over the Cuckoo’s Nest” in 1962 made lots of noise in the literary world of America and soon reached all the other countries. Since that time readers were waiting for the film, and only 13 years after, people were able to see the movie premiere of Ken Kesey’s masterpiece. Based on novel, the film was shot by Milos Forman, who conquered the whole world of cinematography and received five Oscars. In this “One Flew Over the Cuckoo’s Nest” essay example we will analyze the portrayal of an honest, realistic, devastating picture of psychological boundaries between sanity and insanity.

Don't use plagiarized sources. Get your custom essay on
“ Psychological Analysis of the “One Flew Over the Cuckoo’s Nest” ”
Get custom paper
NEW! smart matching with writer

The article includes deep psychoanalysis of the characters who are trying to understand their inner Egos and gain spiritual freedom.

Analysis of psychology may begin even with the movie title because “Cuckoo’s Nest” symbolizes psychiatric institution, and “One Flew” means flight to meet freedom, to escape from perpetual insanity of our lives. This metaphor can also be perceived as a universal parable that tells about the relation of individuals to problems of freedom, whether it the personal or socially significant ones.

Proficient in: One Flew Over The Cuckoo'S Nest

Another explanation can be connected with the American society because each individual is left alone in the “nest” to create himself or herself. By understanding metaphorical title of the movie, viewers can get better insight of its hidden sense, psychological meaning.

The most prominent feature of the movie is its relation to the present, although the text was written more than 50 years ago.

There are no shades of the past or future because it is relevant at all times. The themes connected with the psychological disorders will always be up-to-date, this significant feature makes this masterpiece immortal. Thanks to lively and dynamic language of the narration, all visual images are filled with the whole gamut of colors, sounds.

In the story, there are subtle psychological thoughts, excellent ideas and very unusual, incredible situations. Characters experience inner conflicts which resemble realistic problems. Movie narrator tries to overcome inner controversies by receiving freedom; it is significant for him to gain victory over himself. Experiencing the same emotions simultaneously with the characters or actors, you get a desire to look at yourself, to compare yourself with the described events, situations, to embrace yourself with other discussed psychological issues – to the fullest and widest of the soul. Through the vision of narrator, the world around the reader’s imagination looms brightly, colorfully and vividly.

“One Flew Over the Cuckoo’s Nest ” is a much more complicated film than it may seem. The reader question why the main character is not the narrator of the plot. It is the specific feature of psychological impact on viewers: in the real psychiatric institutions, the most influential person may wait in silence. Unless you haven’t read the novel before watching the film, you can even not notice Chief Bromden who gets lost among the other patients. It seems that all short scenes with his participation serve only as an indicator of overall atmosphere. This confusion of connecting narrator and protagonist is called in literature third-person narration. Such an effect creates deeper image of insanity which penetrates the whole film. When there is a boundary between normal and insane life perception, everything becomes blurred, and this is why narration makes the film more complicated but interesting to watch.

Characters can be compared with the Jung’s theory of Archetypes. McMurphy is not a hero at all; he is just the Indian’s imagination which symbolizes undisclosed opportunities. The events taking place in the psychiatric hospital reflect inner drama of a man who becomes an insignificant creature closed in cage. Situations that happens in the film is not about real people; it is just a dream of Chief. The entire set of characters represent images of the Chief’s subconscious. The events in the film make the reader analyze similar self-images inside each of us.

The denouement of the film is unexpected and leaves a controversial inner feeling. Soft irony, along with comic situations and harmoniously interwoven plot, becomes an inseparable part of the whole story. The central conflict is hidden inside the Chief’s mind – the battle between Freedom and Submission. By killing McMurphy, he refuses to fight any longer. He does this not because of giving up. He is just overwhelmed with everything that happened in the psychiatric institutions, and he does not want to “play these games anymore.” Chief manages to find his freedom – not the one which he gets after the escape from prison, but the spiritual one, hidden in the depth of his conscience.

Psychological Analysis of the "One Flew Over the Cuckoo's Nest". (2017, Dec 15). Retrieved from https://studymoose.com/psychological-analysis-of-the-one-flew-over-the-cuckoos-nest-essay 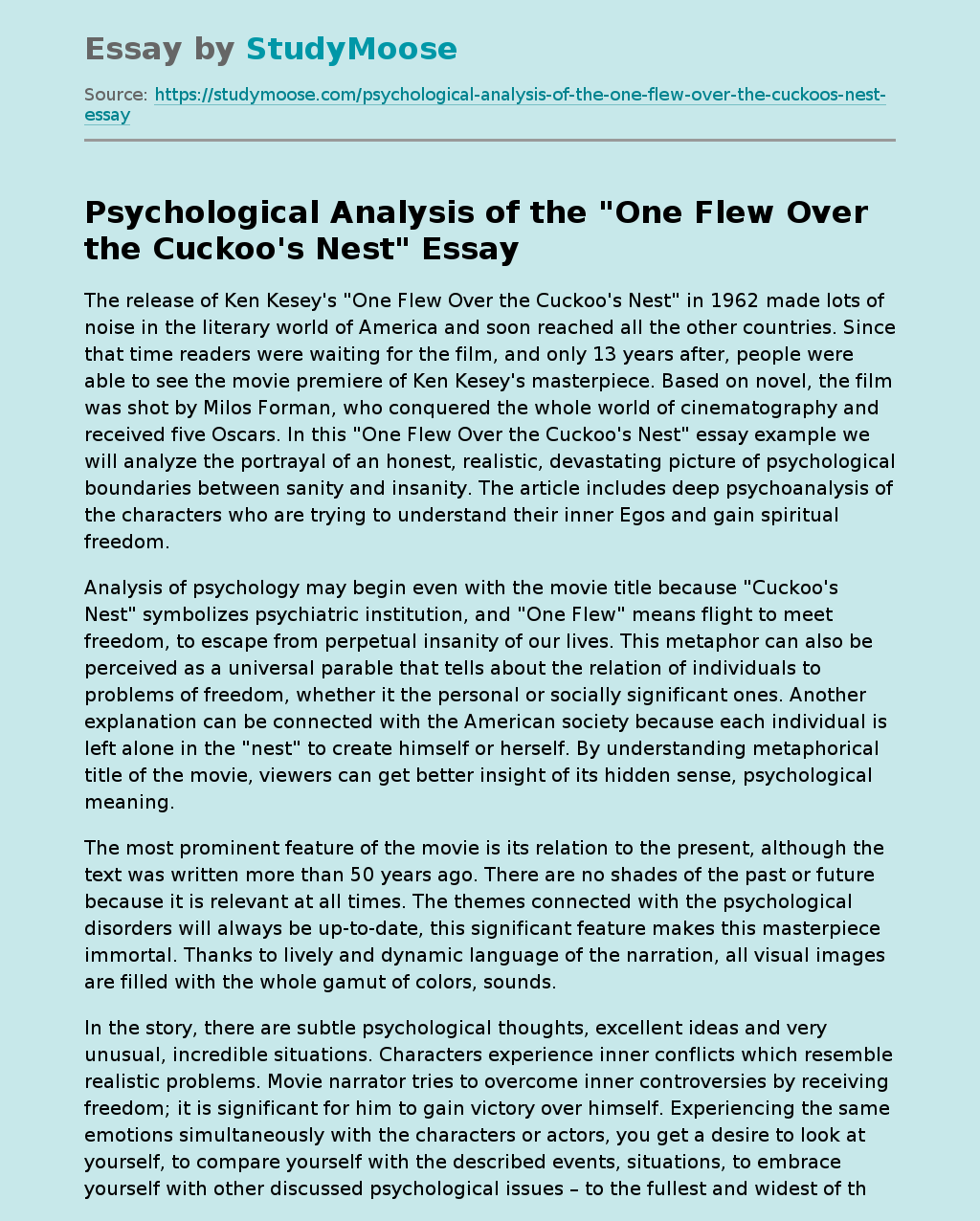