The popular child star, Amanda Bynes, has recently gone through a wild child phase, as seen by committing several federal crimes, such as hitting and running, driving under the influence, and using illegal drugs. Bynes has recently been diagnosed with both Schizophrenia, and Bipolar Disorder. Finally, after several outrageous months, Bynes was, “placed under an involuntary hold,” known as the 5150 psychiatric hold, in Los Angeles, California. The UCLA Medical Center came to a conclusion and diagnosed Amanda Bynes with both, a bipolar disorder, and schizophrenia.

Bynes’ disorder can be applicable based on several different perspectives such as the biological, and the social cognitive. Schizophrenia is a severe psychological disorder in which the person is categorized as having disturbed perceptions, inappropriate emotions and actions, disorganized, and delusional thoughts. Schizophrenia occurs due to dopamine over activity in the brain, biological predisposition, and environmental stresses when in the mother’s womb.

Bynes biological, schizophrenic symptoms included hallucination, disorganized speech, social withdrawal, and a sense that she was not truly part of the world.

Bynes also suffers from a bipolar disorder that is also a genetic predisposition and is caused by three different brain chemicals, norepinephrine, serotonin, and dopamine, and abnormal brain circuit function. All the same, Schizophrenia, and bipolar disorders can be connected based on the dopamine chemical. On the other hand, the Freudian perspective believed that schizophrenia was truly several disorders, and was probably caused by the fact that the child did not successfully develop an attachment. Due to the fact that Bynes is actually diagnosed with more than one form of Schizophrenia, and with a bipolar disorder, Freud’s belief was right.

All the same it is said that Bynes suffers a slight form of posttraumatic stress disorder after going through the pressures of stardom.

Bynes never truly had parental figures as mentioned by a fox news source, “Amanda can’t make important decisions regarding her finances and welfare,” explained the source. “But her parents can’t either. Everything still needs to go through Amanda lawyer and the judge.” The Neo-Freudian perspective believed much in the Freudian perspective, but placed a greater emphasize on childhood relationships. Based on the Neo-Freudian perspective the people who developed psychological disorders such as schizophrenia were love deprived. Based on Bynes’ history, the neo- Freudian perspective would apply based on the fact that she grew up on television without living a normal life and forming normal loving relationships. Growing up in the spotlight is not so easy, as portrayed by stars like Lindsey Lohan, Britney Spears, and Macaulay Culkin. The social cognitive perspective emphasizes this point. The social cognitive perspective emphasized the importance of how people process information, and how they apply that information when placed in a social environment. Based on research in both schizophrenia, and bipolar disorder we see how Bynes’ has a lack of social cognition.

One of the symptoms that prove the social cognitive perspective is her need to be in a rehabilitation center due to the fact that she cannot be part of community. The behavior perspective suggests that all behaviors are learned. Based on the fact that Bynes grew up in stardom several celebrities went wild. Based on the behavior perspective Bynes’ paranoid schizophrenia could have also formed from all the paparazzi bombarding her. Existential psychology uses the study of phenomena, which are our feelings, relationships, thoughts ext. Existential psychology focuses on the inner conflicts a person, has based on confrontation with the world. All the same there are two existential dilemmas that include the balance between autonomy and connection, and the need to have a sense of self-security. For bipolar as well as schizophrenics existential psychology greatly affects the person. Before being admitted into rehab, Amanda Bynes was said to be suicidal, meaning that her thoughts on her own existentialism were extremely low. All in all, we see how all of the six different perspective of Amanda Bynes’ can be of great use when diagnosing a psychological disorder. 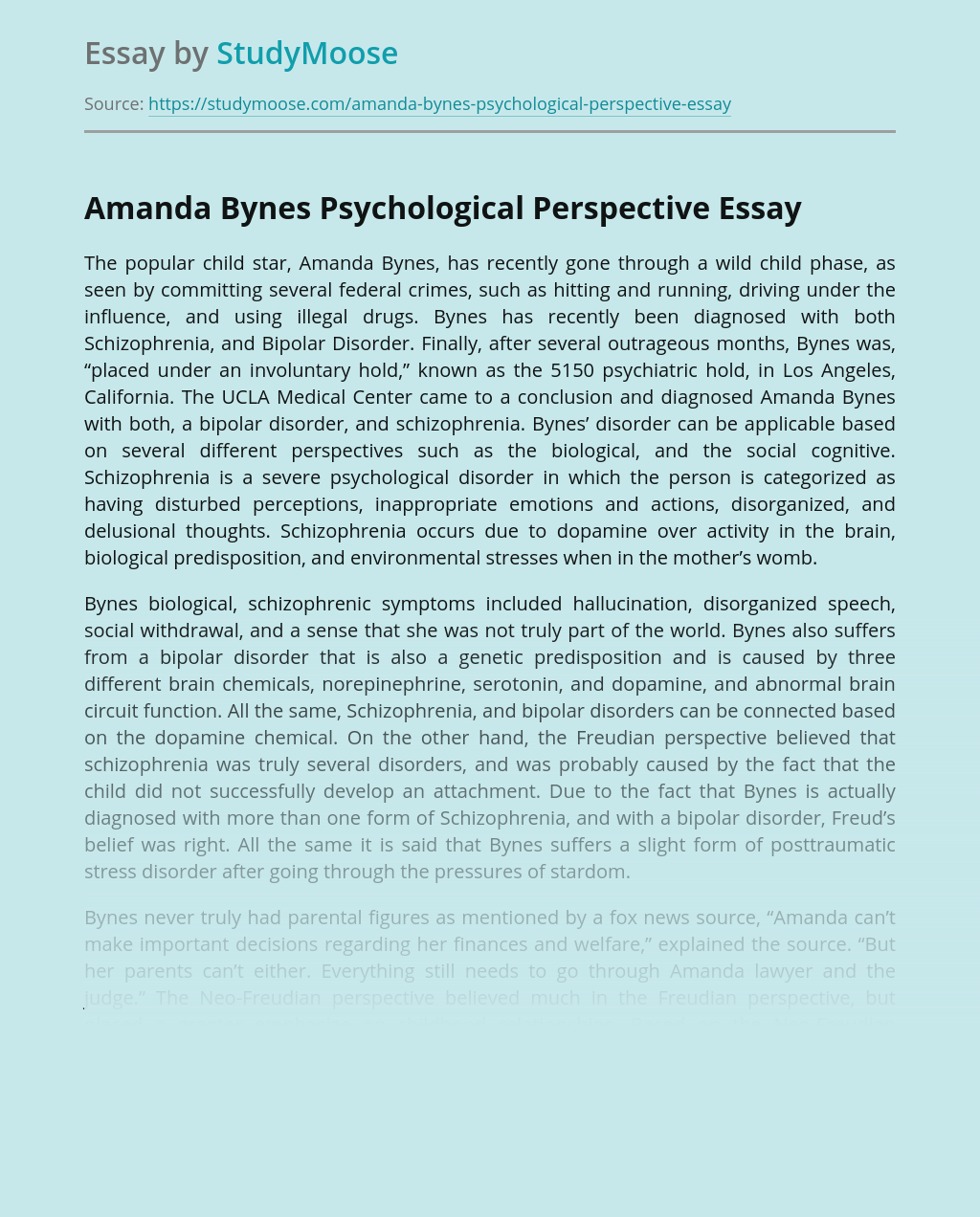