It could easily be perceived by many that Amanda is a bad parent to Laura and Tom, through the way in which she seems to put her own needs before her children’s in many of the situations within the play, ‘The Glass Menagerie’. A case of Amanda being a bad parent and putting her own needs first, could be demonstrated through the way in which she constantly takes control and dominates every situation only thinking of herself, as well as shirking her responsibilities at times on to her son, Tom.

Don't use plagiarized sources. Get your custom essay on
“ The Glass Menagerie Amanda ”
Get custom paper
NEW! smart matching with writer

Amanda as the mother should be solely responsible, making sure they are cared and provided for. However, Tom seems to regularly have both Amanda and Laura’s problems unfairly unloaded upon him, and then he is expected to solve these problems. Such as, Tom was forced into finding a job at the warehouse in order to support both his mother and his sister, effectively taking over the main parenting role of Laura.

This can be seen when Amanda states how as soon as Laura is provided for, married and independent, then Tom will ‘be free’ to go in the direction he so desires.

As a parent, Amanda displays key characteristics such as selfish and domineering behaviour. This can be seen directed mainly at Tom throughout the play and a key example of this behaviour is how she expected Tom to give up his dreams of becoming a writer and sailing away, just so that she could make sure he was always around to provide for her and his sister.

She displays quite an ironic attitude by how she is portrayed as the selfish one but yet when Tom mentions leaving; he is referred to as a ‘selfish dreamer’ by Amanda.

Amanda also expects Tom to find a man for Laura from the factory; she does not think of Tom’s feelings on the matter and does not raise the subject in a way of conversation with Tom, she rather demands that Tom arrange and bring home a gentleman. Amanda can also be seen as being a bad parent through the way in which she constantly pushes the subject of gentlemen callers around Laura, bringing up her own past and seemingly living out her Pyounger years again through Laura.

Once more, she portrays a very selfish attitude when she appears disappointed and upset that Laura does not receive gentlemen callers, but instead of comforting her daughter, she worries that no one will want Laura and there will not be anyone around to support both herself and Laura in the future. This irrational behaviour from Amanda could portray her as a bad parent to the audience since she appears very self-centred. However, it is also very apparent to the audience that she cares a great deal about the welfare of Laura.

This caring attitude towards Laura can be seen through the way in which to pay for Laura to attend her Business course at school and to generally help contribute a bit of money towards supporting the family, Amanda spent endless hours on the phone trying to convince people to renew their subscriptions with the magazine. In another light, Amanda can also be viewed as extremely caring due to the fact that although her thoughts and ways of carrying out her thoughts are tremendously eccentric, she does them in the best of heart.

She openly shows that she believes that she needs to work harder due to Laura’s disability because she knows that the truth is many people will look at Laura’s disability before they will attempt to know her personality; and by that point they would have already judged and formed their opinion. Although Amanda’s intentions are pure for both Laura and Tom, it is easy to see how she can be viewed as a bad parent, since her fear of being left on her own or not provided for, puts her own needs before her children’s. 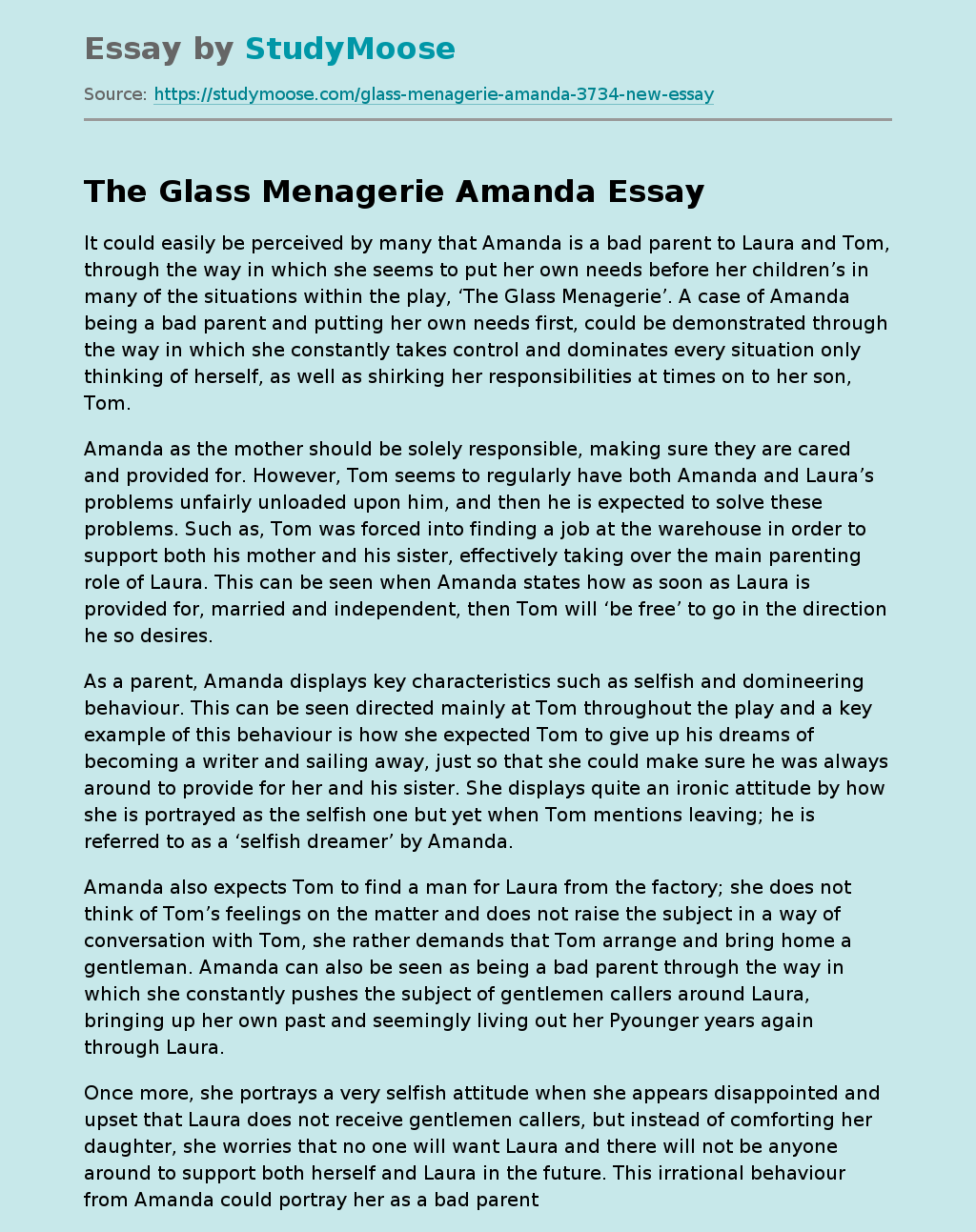