Altruism is the selflessness to do things that bring advantages to others and practicing concern for the well-being of others. In the memory play “The Glass Menagerie,” by Tennessee Williams, Amanda Wingfield is a woman of great liveliness who tends to live between reality and illusions. Amanda reminisces the days of her youth and often tells her children stories about her seventeen gentlemen callers. She is often caught between her past life with lots of money and her present life with none.

Don't use plagiarized sources. Get your custom essay on
“ Amanda Wingfield: The Glass Menagerie ”
Get custom paper
NEW! smart matching with writer

Even though she does not have any money, she tries to portray herself as though she did by wearing her best clothes from her childhood. She also keeps her home clean and immaculate when guests like Jim visit the house for dinner. Amanda desperately wants her past back and is stubbornly bitter with her children after the abandonment of her husband. She has failed to accept her children’s different personalities and has continued to live in an empty and meaningless life.

Amanda Wingfield is responsible for causing many of the family’s conflicts in the household because she is overprotective of her children and is caught between her past and the present.

Because Amanda is overprotective of her children, she treats Tom and Laura with disrespect and has a constant flippant attitude. One afternoon when Amanda visits Laura’s business college, she discovers that Laura has not been attending her classes for the past six weeks. Because of her past she finds it difficult to respect the differences between herself and her daughter.

As she spoke to Laura’s typing instructor, she said, “No, Laura, my daughter, has been going to school every day for the past six weeks!” (Williams 13). Amanda was confused as to why the typing instructor was unaware of her daughter’s attendance. She refuses to accept her daughter’s peculiar personality and see Laura as her true self. She was raised to become a woman of privilege and not a single mother. Amanda constantly nags Tom about brushing his hair, eating properly, and having good manners. She is disrespectful towards Tom and forces him to find a nice young man for Laura. Tom tells Amanda, “I thought you wished for a gentleman caller. Don’t you remember asking me to fetch one?”(Williams 40). She feels that Tom is irresponsible and should be acting more as a father figure towards Laura by finding her a gentleman. Amanda should respect that Tom is the only source of income for the family and is supporting them by working at the warehouse. Because she has devoted herself to her children, she lives through her children’s lives by planning their decisions.

Unlike Tom and Laura, who escape to their own fantasies, Amanda lives her life through memories from her childhood. Amanda reveals a willingness to sacrifice for her children but continually fails to accept her children’s differences that set them apart from reality. She constantly tells stories about her Southern upbringing and shows how desperately she wants her children to be successful. Everyday she begins to tell her same story,  “Sometimes they come when they are least expected! Why, I remember one Sunday afternoon in Blue Mountain” (Williams 7). She often dreams about her childhood and closes her eyes to escape from her present life. She remembers the day of her youth when she lived in Blue Mountain and received many gentlemen callers. Because Tom wants to follow his dream instead of living with Amanda he says, “I’m like my father. The bastard son of a bastard! Did you notice how he’s grinning in his picture in there? And he’s been absent going on sixteen years!” (Williams 62). She refuses to accept that Tom is more ignorant than her and wants to explore the world by himself. Tom wants to follow in his father’s footsteps to become a marine merchant. Like his father, he abandons the family in search of a new life filled with adventures. Amanda needs to understand that her children have different personalities from her and are caught up in their own dreams and illusions.

Because Amanda Wingfield is caught between the past and the present, she is overprotective of her children and treats them with a flippant attitude. Amanda wants only the best for her children, but continually fails to understand that her children have different personalities from her. Although she is a loving mother, she clings to her past and uses it to plan out her children’s lives. Because Amanda always retreats to her youth, she is oblivious to her reality. Her persistence to live in the past and inability to accept her reality drives Tom away from the household and Laura back to her world of glass menagerie. “Often those who are not the easiest to love are the ones who need it the most.” 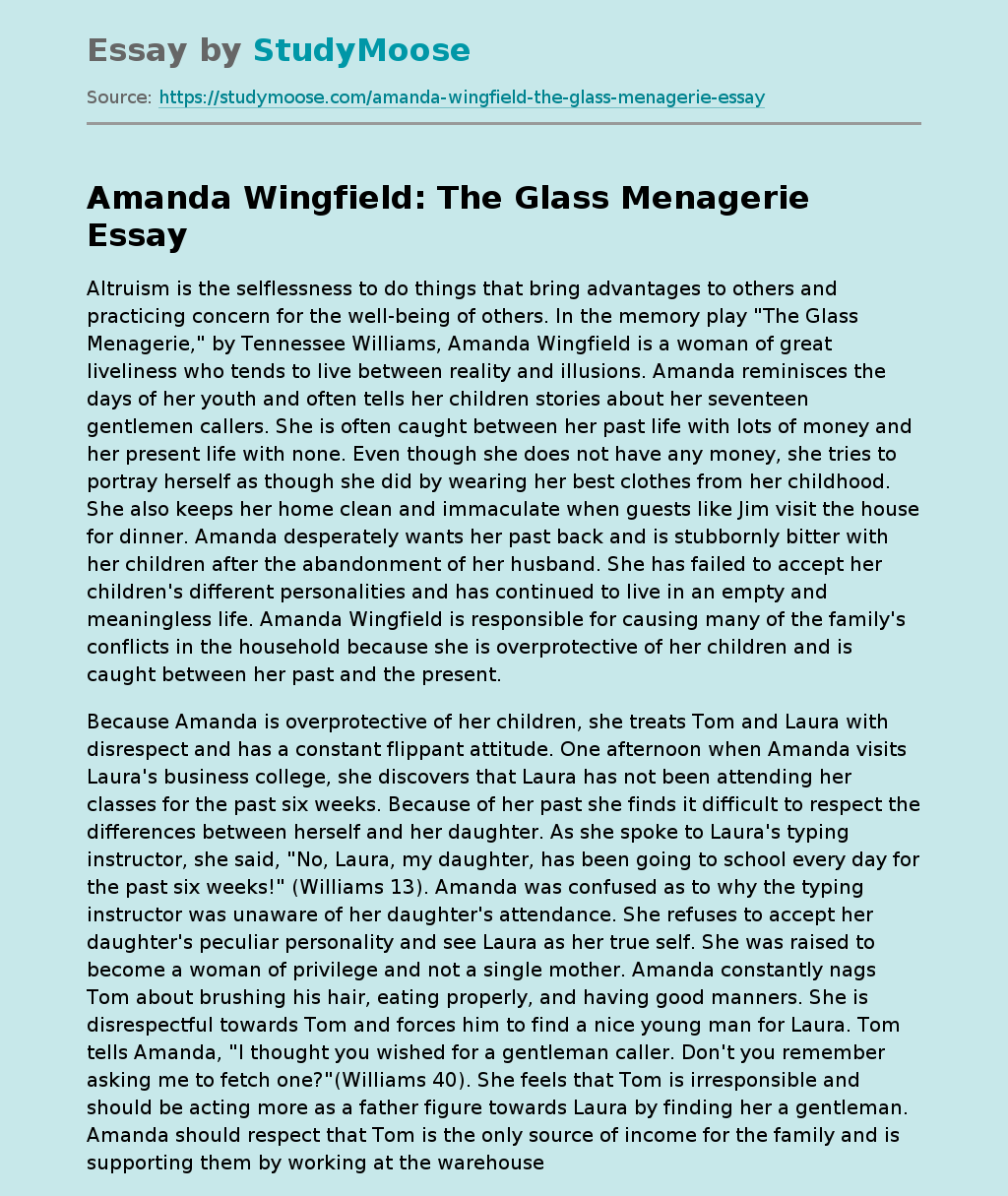