Catcher in the Rye Psychological Analysis

J. D. Salinger’s The Catcher in the Rye portrays Holden Caulfield, a New York City teenager in the 1950’s, as a manic-depressive. Some critics of Salinger’s novel assert that Holden is too whiney and annoying as a character. What these critics fail to realize is that Holden’s actions throughout the novel perfectly exemplify that of a depressed teenager. Manic depression, compulsive lying, and immaturity throughout the novel characterize Holden. Holden’s depression finds its roots with the death of his brother, Allie.

Holden is expelled from numerous schools due to his poor academics brought on by his depression.

The manner that Holden sees himself and how he sees others leads him to be expelled from school. According to Michael Martin’s book titled Teen Depression, “depressed teenagers can struggle with depression for month or years. “It is a mental disorder which… includes… feelings of worthlessness, hopelessness, guilt, problems with concentration” (Teen Depression). Throughout the novel, Holden exhibits these symptoms quite frequently.

In fact, Holden makes his depression clear when he expresses how, “packing depressed me a little,” (51, Catcher).

Holden expresses these feelings when he packs his bags after being notified that he is expelled. Holden leaves school and heads for New York City, where he finds himself to be more lonely and depressed than ever. When alone, Holden laments that “what I really felt like doing was committing suicide. I felt like jumping out of the window. ” (104, Catcher). Too ashamed to return home, knowing his mother will be upset and his father will be angry with him, Holden turns to thoughts of suicide.

He also adds that “I wasn’t feeling sleepy or anything, but I was feeling sort of lousy.

Depressed and all, I almost wished I was dead,” (90, Catcher). Critics tend to describe Holden as being just an angst riddled teenager, whose perspective of the world around him is warped. While these critics may view these attributes as annoying, they actually serve to provide an emotional depth onset by Holden’s depression. For example, Negativity and hopelessness is often a symptom of depression, so when Holden narrates, “I’m pretty sure he yelled “Good luck! ” at me. I hope not. I hope to hell not. I’d never yell “Good luck! ” at anybody. It sounds terrible, when you think about it. (78, Catcher) Salinger is simply channeling the thoughts of a depressed teenager.

Depression is a disease which causes the victim to enter this pessimistic state of mind, so naturally outside observers may be irked by Holden’s actions. However, this excerpt clearly illustrates the warped mindset of a depressed teen. Depressed teenagers tend to believe that their situation is entirely hopeless, and cannot possibly be rectified. The utter hopelessness which accompanies depression is not a rare phenomenon and is perhaps the most troubling aspect of the disease. Holden’s actions in the novel could easily be attributed to these symptoms.

According to Teen Depression, depressed teenagers tend to look for relief in sex, drugs, or alcohol abuse. In the short time frame of the novel, Holden sought out 2 out of the 3 aforementioned items. These actions could be attributed to his desire to seek out a temporary form of relief in his life. Drinking allows Holden to escape from his heavy, pessimistic mentality. While Holden was with the prostitute, he was able to rid himself of his overwhelming isolation. Eric Lomazoff summarizes Holden’s situation best when he says that Holden was simply “trying to make the best of his life, though ultimately loosing that battle” (Lomazoff).

Holden Caulfield is not a bad person, as so many critics make him out to be. In fact, Lomazoff goes as far to say that Holden is “a good guy stuck in a bad world”. The main reason why The Catcher in the Rye is so revered is because Salinger is able to embody the perspective of a troubled teenager so seamlessly. Holden’s depression is perhaps the most critical component of Salinger’s story. It is clear that upon closer examination, one would discover that Holden is not just a troubled teenager, but a clinically depressed one.

Catcher in the Rye Psychological Analysis. (2016, Sep 14). Retrieved from http://studymoose.com/catcher-in-the-rye-psychological-analysis-essay 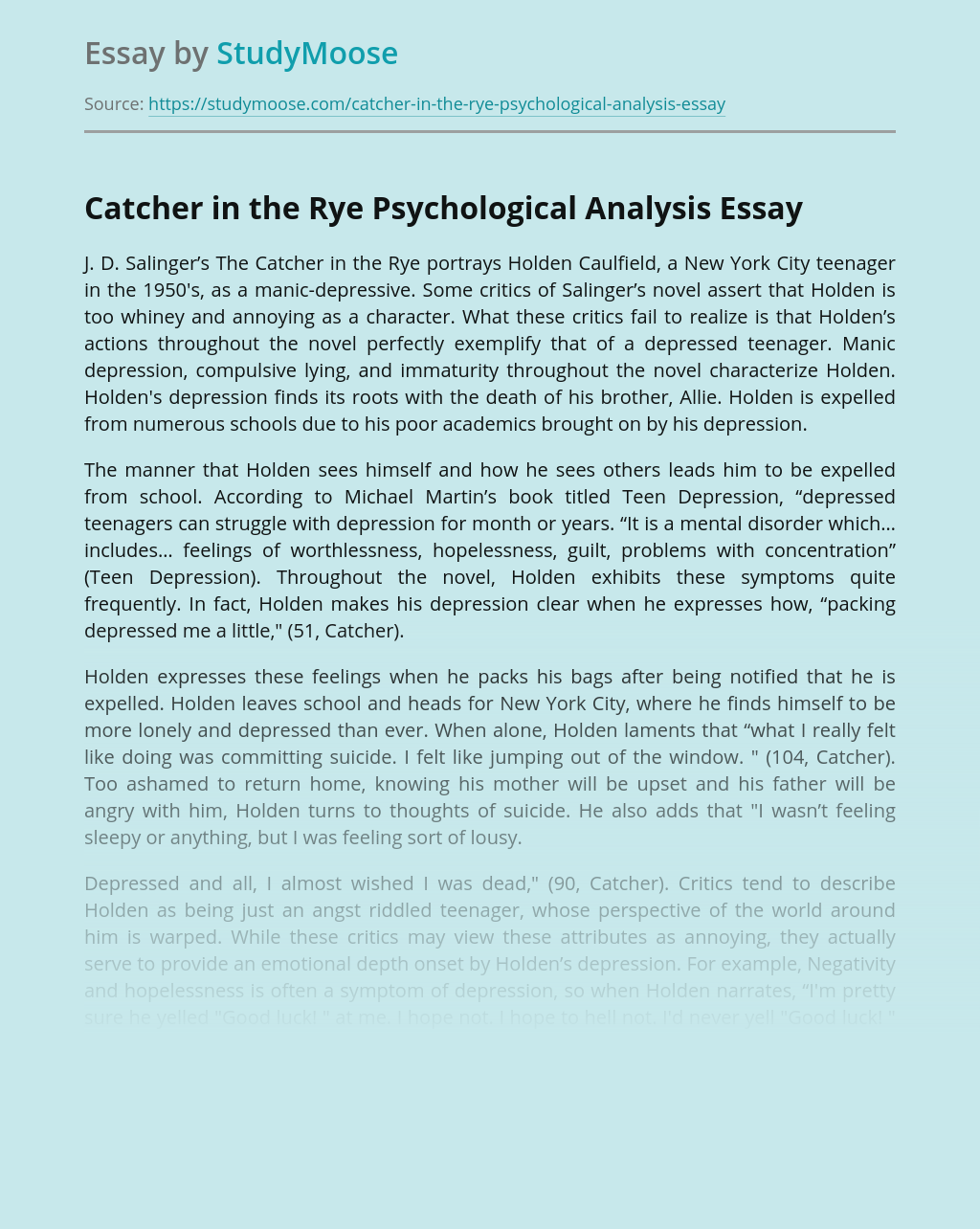 Don’t waste time
Get a verified writer to help you with Catcher in the Rye Psychological Analysis
Hire verified writer
$35.80 for a 2-page paper
Stay Safe, Stay Original