The Catcher in the Rye, a novel written by J. D. Salinger, is set around the 1950s. It is narrated by Holden Caulfield, and follows his three-day journey in New York after flunking out of Pencey Prep. The story centers around Holden, a 17 year-old protagonist, and the transition from innocent childhood into phony adulthood. Considered a coming-of-age novel, it deals with complex issues of identity, belonging, death, and alienation. Salinger uses symbolism in the text to convey these themes to the reader.

Don't use plagiarized sources. Get your custom essay on
“ The Use of Symbolism within Salinger’s The Catcher in the Rye ”
Get custom paper
NEW! smart matching with writer

Symbolism is a way of adding depth and meaning to a story, while conveying a complex idea that can be understood and recognized in a variety of ways. In doing this, Salinger uses symbolism throughout the entire text of The Catcher in the Rye.

Salinger makes Holden’s red hunting hat a crucial symbol in the story. However, Holden only wears the hat at specific times or moments throughout the text. Holden wears his “old hunting hat, [when] writing the composition” (Salinger 37) to connect with Allie due to that fact that the hat is the colour red “and [Allie] had very red hair” (Salinger 38); as he “took a look .

. . in the mirror” (Salinger 45) acting tough after Stradlater had punched him in the face; when leaving Pencey Prep yelling “Sleep tight, ya morons!’ (Salinger 52) to make “sure that he will be rejected. Protected only by the red hat” (Bloom 90-91). Even though he “really got a bang out of the hat” (Salinger 27), he is embarrassed or lack confidence to wear it in public, like on the train, at the bar, and in the hotel lobby.

The hat symbolizes his uniqueness and who he wants to be.

He admits it is “very corny” (Salinger 18) and comments on its unusual appearance, but when he wears it, he can be insular, unique, and tough. Like he is embarrassed to wear the hat in public, he is confused about who he really is or who he wants to be. He wears the hat in times when he desires to be different from everyone around him and “wears [it] backwards on his head in defiance of style and good fashion” (Kallen 38); he chooses to not wear the hat when he chooses to be part of the norm. As the story advances, Holden comes to accept his real self. He wears the hunting hat with more confidence as he walks the streets of New York.

He “didn’t give a damn how [he] looked” (Salinger 88) and becomes a little bit more accepting of his uniqueness from everyone around him, like the hat is uniquely different and stands out. In the last chapters of the novel, Phoebe “reached into [his] coat pocket and took out [the] red hunting hat and put it on [his] head” (Salinger 212). This symbolizes that she accepts Holden for the way he is. The red hunting hat has come to symbolize Holden’s identity and show the struggles that Holden has to find out who he is.

When asked, by Phoebe, who Holden wants to be, Holden replies the catcher in the rye. He imagines “all these little kids playing some game in this big field of rye . . . and [he is] standing on the edge of some crazy cliff . . . [he] have to catch everybody if they start to go over the cliff . . . [he would] just be the catcher in the rye” (Salinger 173). The children on the cliff symbolizes childhood and adulthood would equivalent to falling off the cliff. Instead of acknowledging that adulthood scares him, Holden invents this fantasy where adulthood is a world of phonies, superficiality, and hypocrisy that is equivalent to death, whereas childhood is a world of innocence, curiosity, and honesty. With this fantasy, he resists adulthood and its process by wanting to run away and live in a cabin near the woods, he is “caught between the worlds of childhood fantasies and adult responsibility” (Kallen 52). In this fantasy, he pictures himself as the catcher in the rye.

Holden feels as though he needs to be the catcher in the rye because of the death of Allie and James Castle. “Holden has the ‘crazy’ idea that he should have saved Allie, and that in the future he will save children abused by adults” (Bloom 97). He feels guilty for Allie, “the brother who died before the temptations of adulthood” (Bloom 33). “Allie’s death continues to haunt Holden. As if life froze at the time of Allie’s death” (Kallen 55-56), Holden says he “sometimes . . . act like [he is] about thirteen” (Salinger 9) when in fact he is actually seventeen. He still feels that he could have prevented Allie’s death, and holds the image of the catcher in the rye this way, “he has to bury Allie before he can make the transition into adulthood” (Bloom 87). When the death of James Castle occurred, Holden was taking a shower; he quickly “put on [his] bathrobe and [he] ran downstairs” (Salinger 170), but misses the incident.

He is connected to James Castle by his turtleneck sweater and “Holden felt a sense of loss for failing to prevent James’ death, to catch him before he fell” (Kallen 55). In both of these events, Holden becomes aware that life is
fragile. In Holden’s fantasy, he relates adulthood to death because of these experiences with death. “Holden is poised between two worlds, one he cannot return to and the other he fears to enter” (Bloom 32) and pictures himself being the catcher in the rye that saves everybody from the death of childhood, “from innocence to knowledge, from self-ignorance to self-awareness, from isolation to involvement” (Kallen 53).

Holden finds these signs that say “fuck you” “that drove [him] crazy” (Salinger 201). He finds them on the walls of Phoebe’s school, in the stairway and in the once-sacred tombs of the mummies. These places remind Holden of his childhood and are the places that he feels comfortable and secure in. This symbolizes how easily everything can become corrupted by vulgarities. It is most likely that the vandalism were done by children, but Holden still picture “some perverty bum” (Salinger 201) as the ones responsible for the vandalism. This shows how much Holden believes children are innocent and pure.

Holden then imagines “how Phoebe and all the other little kids would see it, and how they’d wonder what the hell it meant, and then finally some dirty kid would tell them . . . and maybe even worry about it” (Salinger 201) and decides to erase it. After seeing a “fuck you” scratched into the wall, he finally comes to the conclusion that it is helpless because there are too many signs. The signs symbolizes how there are many things that children are exposed to that gives them the knowledge to go from childhood to adulthood. Holden’s conclusion about these “fuck you” signs symbolizes that you can not avoid adulthood and the things that one has to take in the transition between childhood and adulthood.

In the last chapters of The Catcher in the Rye, Phoebe is riding the carousel and is reaching for the gold ring; Holden watches from a distance. He says “the thing with kids is, if they want to grab for the gold ring, you have to let them do it, and not say anything. If they fall off, they fall off, but it’s bad if you say anything to them” (Salinger 211). “He realizes, as with Phoebe, that kids will always grow up and take risks, suffering life’s traumas as they mature” (Kallen 57). Here Holden accepts that growing up is necessary and accepts the fact that you can not protect a child from it; it is better to just accept it. Even though they may get hurt in the process, it is better for them to experience it on their own rather than to be told they will; growing up is something a child has to experience for themselves. The gold ring symbolizes the necessity of growing up, that Holden comes to accept and he leaves “the aimless quest [for the gold ring] to the child” (Kallen 58).

In conclusion, the use of symbolism is greatly used in The Catcher in the Rye. Holden’s red hunting hat represents Holden’s uniqueness that allows him to be different from the people around him. His image of the catcher in the rye and the cliff symbolizes playful childhood and deathly adulthood and how Holden wants to protect the childhood of younger children. The “fuck you” signs become a symbol that represents the many exposures to adulthood that children are faced with. The gold ring has come to represents adulthood and the process of growing up, and Holden accepts that it is necessary to grow up. These symbols represent the acceptance that Holden has. The acceptance of his uniqueness, adulthood, and the possibilities and processes of growing up. These examples of symbolism is greatly explored within Salinger’s The Catcher in the Rye.

The Use of Symbolism within Salinger’s The Catcher in the Rye. (2016, Mar 17). Retrieved from https://studymoose.com/the-use-of-symbolism-within-salingers-the-catcher-in-the-rye-essay 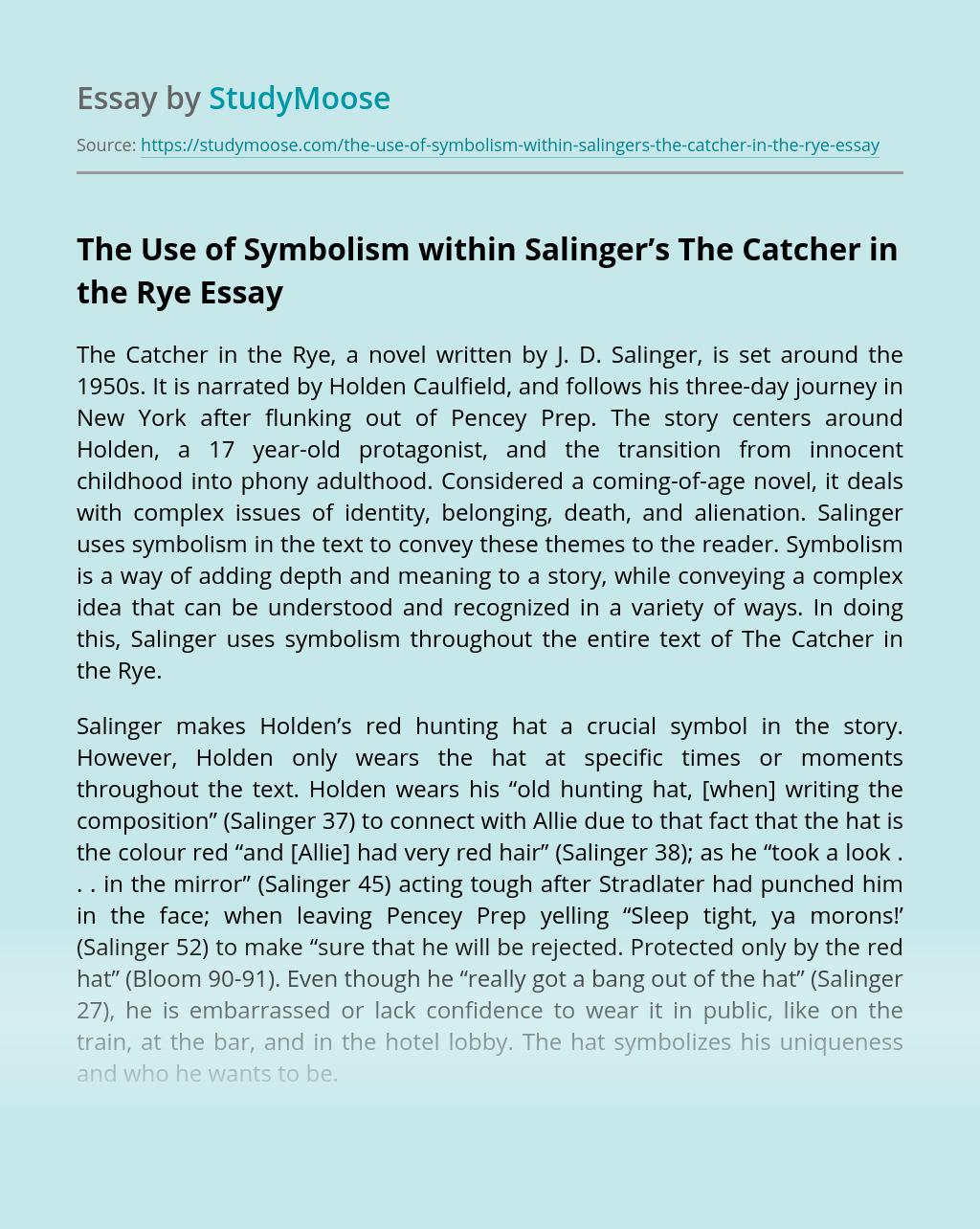