Symbolism in the Catcher in the Rye

In many novels, the title of the story gives away more than the reader of the story might initially think. It often foreshadows important information about the novel or story. Growing up and losing things like your innocence and people you love is hard, especially as a teenager. In the novel, The Catcher in the Rye, author J. D. Salinger captures the hardships and trials and errors someone goes through to overcome it. The novel was published in 1951 and is narrated by a 16-year-old boy named Holden Caulfield after he got expelled from his fourth prep school.

Don't use plagiarized sources. Get your custom essay on
“ Symbolism in the Catcher in the Rye ”
Get custom paper
NEW! smart matching with writer

It takes place within the course of three days, in which he learns about and experiences the hardships and challenges of being an adult. Holden is no longer a child, but he still does not fully become an adult. It portrays Holden’s opinions and feelings of people, like his belief that it is of great importance to preserve other people’s innocence. Author J.

D. Salinger uses symbols to represent Holden’s loss of innocence, and his determination to preserve the innocence of others, the same way an older person might want to preserve a child’s innocence.

One of the first examples of Salinger using symbols to discuss innocence is during a scene where Holden describes the Museum of Arts. Salinger writes, “The best thing, though, in that museum was that everything always stayed right where it was. Nobody’d move” (121). The museum changing could symbolize growing up and losing your innocence, therefore becoming a different person.

Salinger writes, “You could go there a hundred times, and that Eskimo would still be just finished catching those two fish…Nobody’d be different. The only thing that would be different would be you” (121). This shows that when you become a different person, the world around you doesn’t necessarily change, only you perceive that it does due to your new contradictory view of it. This could also symbolize Holden’s perception of growing up and he likes that the museum doesn’t change since that’s how he likes for most things, and people, to be.

Similarly, Salinger uses the symbol of the ducks to represent Holden’s anxiety about growing up. He feels like it’s a curse to lose your innocence, and tries his best to prevent that. Salinger writes, “You know those ducks in that lagoon right near Central Park South? That little lake? By any chance, do you happen to know where they go, the ducks, when it gets all frozen over?” (60). Holden’s intense interest on the ducks symbolizes his struggle with changes, losing his innocence, and growing up. He likes it better when things stay the same, but the ducks show that a person has to change so as to survive and adapt to their vicinity. The “freezing over” of the lake could symbolize turning into an adult and losing your innocence, while the ducks could represent innocence and childhood, showing that it flees for some time, but it eventually returns, but in a different way.

Further more, Salinger uses Holden Caulfield’s brother as a symbol to portray innocence, especially since he died at a young age, meaning that he did not survive long enough to have overgone the transition of becoming an adult and losing his innocence. Salinger writes, “People with red hair are supposed to get mad very easily, but Allie never did, and he had very red hair” (38). This is an example of him talking about how innocent and perfect Allie is. Holden is adding to the picture of a perfect person who hasn’t lost, and never will lose, their innocence. In a way, Allie is Holden’s model of innocence. He never once mentioned something bad about Allie, every time he talked about him. Holden simply cannot bear to accept Allie’s death, the death of pure innocence that had no good reason to suffer or die. In Holden’s eyes, Allie represents his ideal of the truth, of living life purely innocent.

Holden knows that no matter how hard he tried, he could not preserve the innocence of everyone he meets. Although, he tries his best to do what he can. Salinger writes, “Somebody’d written ‘Fuck you’ on the wall. It drove me damn near crazy. I thought how Phoebe and all the other little kids would see it, and how they’d wonder what the hell it meant, and then finally some dirty kid would tell them–all cockeyed, naturally–what it meant, and how they’d all think about it and maybe even worry about it for a couple of days” (201). This could show that even though he tries his best to help kids keep their innocence, it doesn’t always go the way that he wants. In addition, it could show that although he tries his best, Holden Caulfield cannot protect everyone’s innocence, no matter how hard he tried.

Lastly, Salinger uses the symbol of the cliff to show Holden’s commitment to preserving kids’ innocence. Salinger writes, “What I have to do, I have to catch everybody if they start to go over the cliff…I’d just be the catcher in the rye and all” (173). By saying this, Holden wants to stop kids from falling off the edge of losing their innocence. So by standing on the edge and catching them, he is protecting them from reaching that point. This could also mean that he is directly on the brink of innocence/childhood and losing his innocence/adulthood. Because of this, Holden doesn’t want other kids to go down the same path he did to protect them from losing their innocence. The part about people not looking where they are going could mean that they don’t understand what they are getting themselves into. Salinger also writes, “I mean if they’re running and they don’t look where they’re going I have to come out from somewhere and catch them” (173). This could mean that he wants to help kids who don’t know what they are getting themselves into trying to grow up too quickly.

In conclusion, author J. D. Salinger portrays Holden Caulfield as someone who lost his innocence but tries to preserve the innocence of little kids, through symbols like the Museum of Arts, ducks in a lake, a child, and him being the catcher in the rye, catching kids that fall off a cliff, doing what everyone might want to do, saving/helping people the best that they can. Holden shows that some people can only hold on to their innocence for so long before it causes them to lose sight of themselves, and start wanting others to do the same.

Symbolism in the Catcher in the Rye. (2021, Apr 20). Retrieved from http://studymoose.com/symbolism-in-the-catcher-in-the-rye-essay 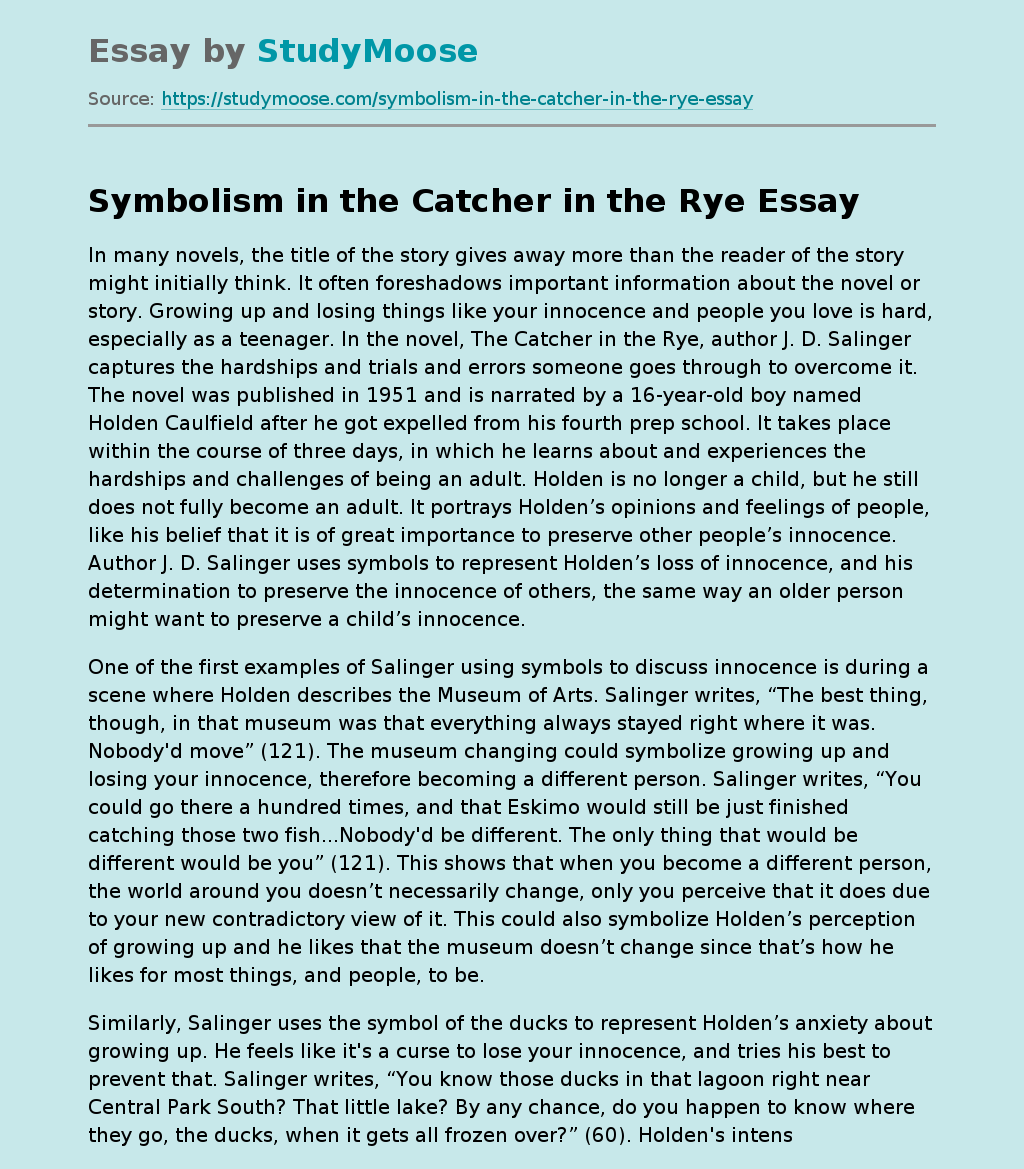