Analysis of “The Catcher in the Rye”

The author of the book “The Catcher in the Rye”, J.D. Salinger, did an amazing job in this story using his main character, Holden, to portray the struggle of adolescence teens in their transformation from child to adult. Throughout the book you witness Holden’s thought process as he struggles to embrace adulthood, while trying to maintain his childhood innocence. You read about his experiences and the feeling of his loss as he leaves his childhood behind. He goes through several stages throughout the text in his transformation from one extreme to the other.

Don't use plagiarized sources. Get your custom essay on
“ Analysis of “The Catcher in the Rye” ”
Get custom paper
NEW! smart matching with writer

Holden at first seems like any other teenage boy wrestling with the pros and cons of adulthood, but you soon realize that there is more to Holden then what you would consider a normal teen coming into his own. Holden struggles far more then his peers to make the transition into adulthood due to his younger brothers’ death that occurred a mere three years prior to when the story takes place.

His brother weighs heavy on Holden’s mind all throughout the story as Holden feels that his brother was cheated out of his chance to live and was taken far to early. Each time Holden refers to his little brother you can see that Holden holds his brother above himself and shows guilt that his brother should be the one to die instead of himself.

When Holden introduces Allie in the beginning while writing his roommates composition he says “You’d have liked him. He was two years younger than I was, but he was about fifty times as intelligent.

He was terrifically intelligent.” (Salinger pg. 38) By stating this Holden exposes his guilt that he lived, and his little brother died. By saying that he was more intelligent he is implying that his brother is better than himself. Why should he have lived over his brother when clearly his brother was so much better? He then goes on to express “His teachers were always writing letters to my mother, telling her what a pleasure it was having a boy like Allie in their class. And they weren’t just shooting the crap. They really meant it. But it wasn’t just that he was the most intelligent member in the family. He was also the nicest, in lots of ways. He never got mad at anybody.” (Salinger pg. 38) This statement shows the admiration he had for his brother. It also explains why Holden doesn’t apply himself in school, he feels he would be taking his brothers place. By not doing well Holden keeps his brothers’ memory alive in a couple of ways. Maybe he feels that if he does horrible in school, his family will think of the opposite, such as, why can’t Holden be as good as Allie was? Or maybe he feels guilty that he can continue to go to school and Allie can’t, and by doing horrible, is he making up for that fact? By stating that Allie was the nicest in the family proves Holden holds him above everyone else. Due to the age that Allie passed away, he will forever be a child in Holden’s mind, a child that was deprived of his innocence by death.

Analysis of “The Catcher in the Rye”. (2021, Sep 20). Retrieved from http://studymoose.com/analysis-of-the-catcher-in-the-rye-essay 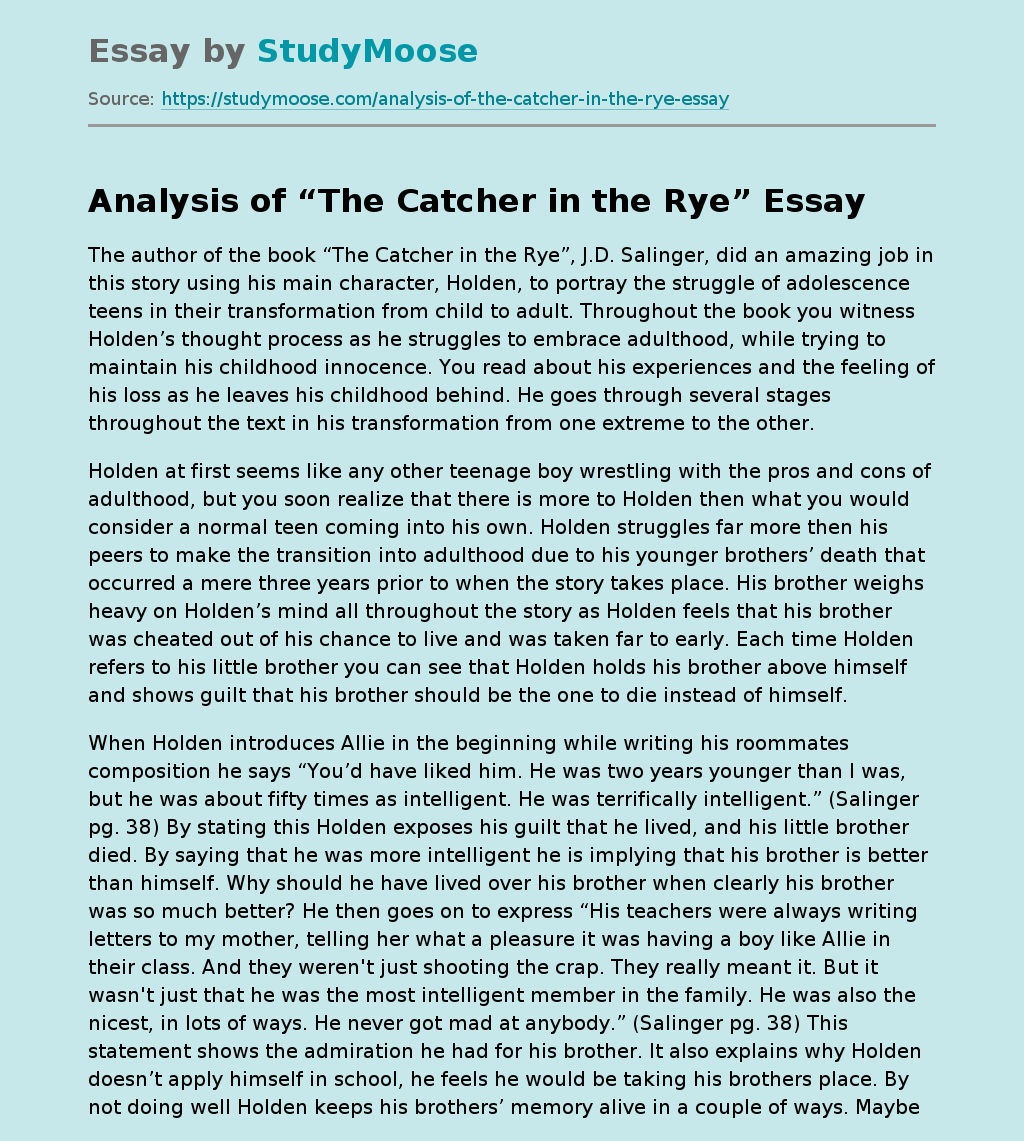