The Curious Incident of The Dog In The Nighttime: Protagonist Analysis

Don't use plagiarized sources. Get your custom essay on
“ The Curious Incident of The Dog In The Nighttime: Protagonist Analysis ”
Get custom paper
NEW! smart matching with writer

Throughout the story Christopher is faced with countless incidents in which he responds quite oddly. For Christopher and Holden from J. D Salinger’s The Catcher in The Rye, the path away from social isolation is tough due to the fact both characters have been face with social isolation there whole lives. Holden Caulfield is a sixteen-year-old boy who is caught in the transition from childhood to the adult world.

Holden has to undergo many situations in the novel in which affect him physically but more so mentally.

Holden is emotionally trapped and confused due to the fact he suffers from depression that leads to his loneliness, ultimately setting up Holden’s social isolation.

In Mark Haddon’s story ‘The Curious Incident Of The Dog In The Nighttime’ and J. D Salinger’s ‘The Catcher In The Rye’ Christopher and Holden’s backgrounds and environment and very different but in both stories the characters experiences with death, mental illnesses and their journeys to independence all lead to Christopher and Holden’s social isolation.

Christopher and Holden’s Experience with death eventually ends up in their social isolation. The death of Christopher’s mother unknowingly leads to his social isolation. To illustrate, Christopher comes home from school one day and no body is home which is unusual, when his father gets home he then says to Christopher that his mother is in the hospital, and later goes on to say his mother has died. “Father said that she died of a heart attack and it wasn’t expected”. (Haddon 27). “Mother died 2 years ago …” (Haddon 22).

Shears dog who has been murdered with a pitchfork in the front yard of Mrs. Shears’ house, which is two houses to the left of Christophers. To further illustrate, Christopher discovers this at the beginning of the novel when he is going for one of his late night walks. “It was 7 minutes after midnight. The dog was lying on the grass in the middle of the lawn in front of Mrs. Shears’s house. Its eyes were closed. It looked as if it was running on its side, the way dogs run when they think they are chasing a cat in a dream. But the dog was not running or asleep. The dog was dead. ” (Haddon 1).

Holden bottles in all his emotions, and does not socialize with others. Holden experience with the death of himself, not literally, but emotionally Holden feels a sense of loneliness and emptiness when he is in the hotel. For further explanation while Holden walks through the hotel lobby, he starts to think about his life and its meaning, comparing it to the empty hotel, Holden says to himself. “I almost wished I was dead. ” (Salinger 90). Holden has this thought that his life is so empty and useless, and he is so lonely that he would rather be dead. It seems as if Holden is emotionally dead.

He doesn’t think like a normal person, Christopher also cannot socialize with strangers. To further explain when Christopher is introducing himself at the beginning of the novel. “My name is Christopher John Francis Boone. I know all the countries of the world and their capital cities and every prime number up to 7,057. ” (Haddon 2). In Christopher’s case he suffers from a mental disorder that is called autism. He doesn’t think like a normal person he takes great detail from everything and has an amazing memory.

Christopher doesn’t like to talk to strangers and is on edge whenever he is in public. And a man came up to me and he was wearing a blue jacket and blue trousers and he had brown shoes and he was carrying a book in his hand and he said, “you look lost. ” So I took out my Swiss Army knife. ” (Haddon 171). Chris cannot communicate with strangers very well and gets nervous when strangers approach him or talk to him. He believes there going to touch him inappropriately. Christopher is isolated for most of the novel but the difference is that he has autism and doe not like to be in the company of people.

To further explain, Christopher talks about his situations when he does not like to be around people. I knew that it meant “happy”, Like when I’m reading about the Apollo space missions, or when I am still awake at three or four in the morning and I can walk up and down the street and pretend that I am the only person in the world. ” (Haddon 2). Christopher reads about space missions due to the fact space is so far away, there is no people, and the thoughts of being in space gives Christopher a sense of social isolation which he enjoys. While Christopher’s autism forces him into a state in which he is isolated due to the fact he cannot communicate correctly.

Holden undergoes a similar fate as he also has a mental illness of mental instability of depression. Holden’s mental breakdowns lead him to suffer extremely emotionally eventually leading in his social seclusion. Mental illness is something that is keeping Holden back from his full potential at school. He has just been kicked out of his fifth prep school the reason why is because he had not applied him self. After reading the novel many readers would suspect Holden is suffering from depression. “New York’s terrible when somebody laughs on the street very late at night.

You can hear it for miles. It makes you feel so lonesome and depressed. ” (Salinger 81). Holden is walking the streets late at night alone and when he hears someone laughing it makes him feel lonely and depressed because he has no one to laugh with or talk too which is a sign of Holden’s isolation. At the end of the novel readers find out where Holden is telling the story. “A lot of people, especially this on psychoanalyst guy they have here, keeps asking me if I’m going to apply myself when I go back to school next September. It’s such a stupid question, in my opinion.

I mean how do you know what you’re going to do till you do it? The answer is, you don’t. I think I am, but how do I know? I swear it’s a stupid question. ” (Salinger 213). Holden explains that he is in a mental institution and is being questioned about if he is going to apply himself next year and he answers saying that he wants to but doesn’t know until he is in class. Christopher and Holden possess mental illnesses in which pushes them away from family and peers due to the lack of communication.

Holden Caulfield is expelled from Pencey Prep from the result of having poor grades. Holden is forced to leave and journey by himself to find his real self. Holden is lonely through this journey. Holden is in a cab and asks the cab driver if he wanted to have a drink with him because Holden does not have anyone to drink with. “well-take me to the Edmont then, “I said. ” “would you care to stop on the way and join me for a cocktail? On me, I’m loaded. ”(Salinger 60). Holden is very lonesome and isolated from his friends and family so he ask the cab driver to spend time with him so he would not feel so alone.

Later in the novel Holden is drunk at a bar by himself and feels very emotional. To further illustrate while Holden is at the bar he says. “When I finally got down off the radiator and went out to the hat-check room, I was crying and all. I don’t know why, but I was. I guess it was because I was feeling so damn depressed and lone some. ” (Salinger 153). Holden is a drunk and very emotional and comes to the realization that he is alone and isolated which makes him very upset and sad which is why he is crying.

Once Holden comes to this realization, he becomes further depressed and socially isolated. Christopher and Holden are both on their journey to independence. Along Christopher’s journey he discovers that his mother is alive and has to see her. Holden discovers his true self, both leading them out of social isolation. In the comparison of the two novels many themes catch the reader’s eye such as isolation when Christopher walks around late at night because he likes to be alone, or the mortality of Allie which brings a lot of pain to Holden which maybe causing his mental issues.

Furthermore into the novel both main characters find their true identity and become there own person. Isolation is a major theme threw out Holden’s adventure alone in New York City. In comparison Christopher travels to London, England all by himself to try to find his mother. Mortality in Holden’s life changes the way he views the world always thinking about Allie and if he could be there more when he was around in comparison Christopher tries to solve the mystery of who killed wellington the dog and the mystery of his mother not being dead.

In Holden’s case mortality leads to mental illness in the way of depression from missing his brother so much and be lonesome at school. Christopher shows his real identity and brings his mother and father closer together after fighting for many years. In Conclusion, both Christopher and Holden battle isolation which in Holden’s case caused him to have mental breakdowns as well in the end of the novels both young men find their true selves which allows Christopher and Holden to move on with their life knowing who they are and learning to accept themselves.

The Curious Incident of The Dog In The Nighttime: Protagonist Analysis. (2016, Dec 08). Retrieved from http://studymoose.com/the-curious-incident-of-the-dog-in-the-nighttime-protagonist-analysis-essay 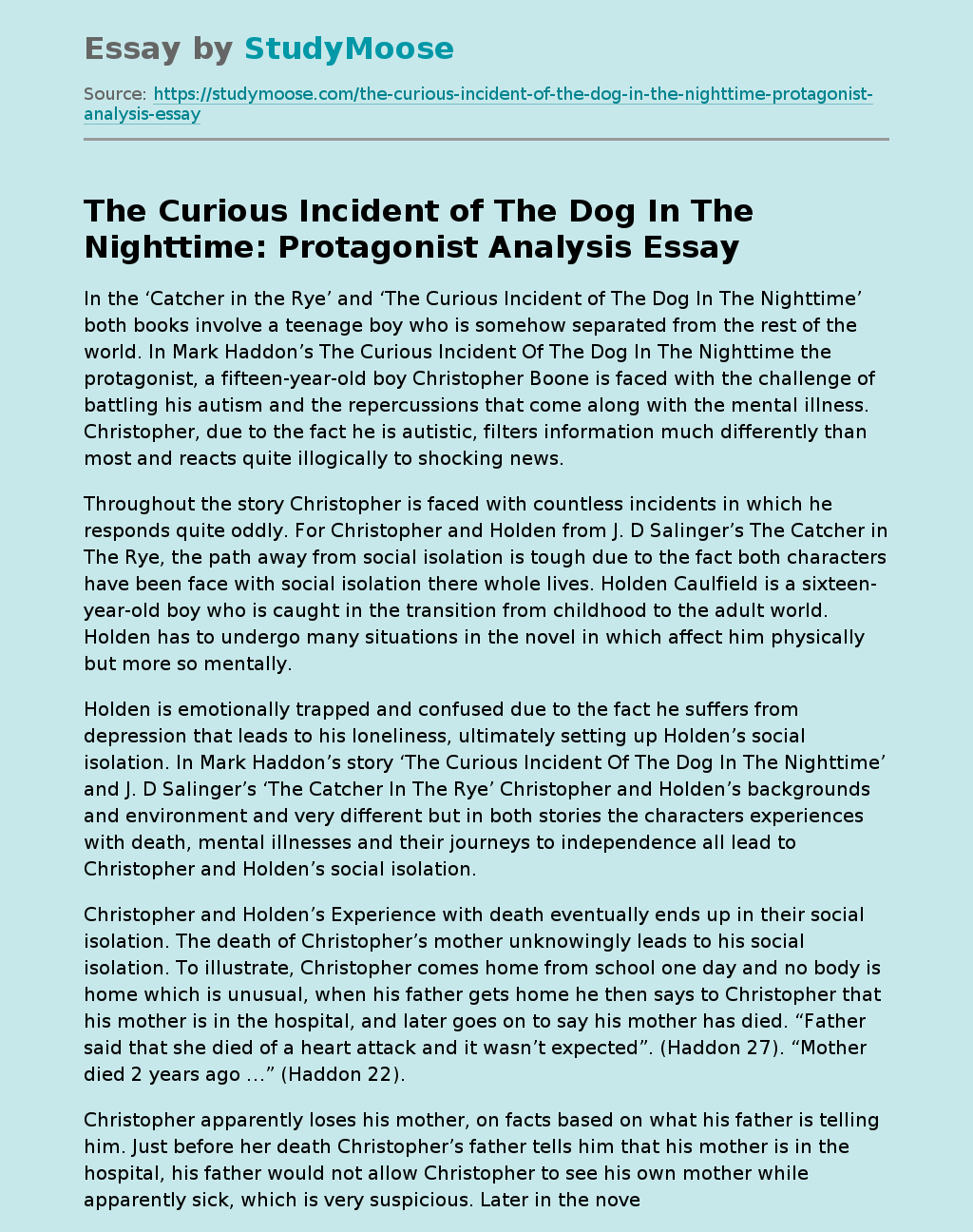