Loneliness and Isolation in "The Catcher in the Rye"

The feeling of loneliness and isolation is getting more and more common in today’s society and it’s very prevalent among teenagers in the United States. This is similar to the protagonist in the J.D Salinger novel “The Catcher in the Rye” named Holden Caulfield. Holden expresses an unmistakably negative attitude throughout the entire book and we can easily recognize this after reading the first chapter. We can see that he makes many mistakes which are consistently caused by his poor mindset and his tendency to alienate himself from everyone.

Don't use plagiarized sources. Get your custom essay on
“ Loneliness and Isolation in “The Catcher in the Rye” ”
Get custom paper
NEW! smart matching with writer

Holden’s constant self-alienation leads to him being very lonely and very depressed. He distances himself from his friends, his relationships and even his family.

To begin, Holden often tries to separate himself from many of his friends. He gravitates towards lying to them and misleading them which helps him avoid social interactions. For example, he decides not to attend his school’s big football game with all of his peers.

Instead he creates excuses so he does not have to go. He mentions how he just got back from New York City with the fencing team and he wants to say goodbye to Mr. Spencer. It is clear that he could have sat down with everyone else rather than sitting alone on Thomsen Hill and he surely could have waited to say goodbye to Mr. Spencer. In addition, Holden is seen going to Ernie’s and he runs into a girl D.B used to date named Lillian, and her boyfriend.

She starts talking to him and offers for him to come sit with them but says he has to meet with someone just to avoid making conversation. Holden’s bleak attitude could have most likely been prevented if he’d put an end to his lying and if he’d actually make conversation more often instead of labelling everyone as a phony.

Secondly, Holden continually tries to part from his own family. He rarely even speaks to his parents. This is very harmful to his well-being and causes him to become increasingly depressed. For example, Holden says: “I didn’t want to go home or anything till they got it and thoroughly digested it and all. I didn’t want to be around when they first got it. My mother gets very hysterical” (Salinger 58, Chapter 7). This shows that he’s afraid of what would happen if he went back home and his parents knew about his expulsion from Pencey. He continues to distance himself this way and stalls his visit with his parents. To continue, Holden often talks poorly about his older brother D.B. and frequently mentions how he’s a sellout. Now he’s out in Hollywood, D.B., being a prostitute. If there’s one thing I hate, it’s the movies. Don’t even mention them to me (Salinger 4, Chapter 1). Holden doesn’t agree with his brother’s decision, he thinks he threw away his talent for money. Afterwards, he now no longer has a close relationship with him like he used to when they were younger.

Lastly, Holden is constantly thinking about Jane and he says he’ll call her but then adjourns it until chapter 18 and she never answers. His delaying conclusively aggravates his loneliness and depression on top of everything else. It’s clear that Holden is deeply in love with Jane because of his nervosity before building up the courage to call her. Jane undoubtedly means a lot to Holden, Jane Gallagher. Jesus. I couldn’t get her off my mind. I really couldn’t. I oughta go down and say hello to her, at least. (Salinger 37, Chapter 4). This shows how she holds a lot of importance and to him, while he continues to make mention of her this way from beginning to end and still wouldn’t end up talking to her. Additionally, Holden gets very angry and upset when Stradlater refuses to tell him if he gave her the time or not. He even punched him on the side of the head because of it and was almost crying. What’d you do? Give her the time in Ed Banky’s goddam car? My voice was shaking something awful (Salinger 49, Chapter 6). Holden couldn’t stand the thought of that and it undeniably made his depression much worse, especially since he could’ve talked to her before her and Stradlater went on their date.

In conclusion, Holden’s nonstop self-alienation inevitably leads to him becoming very lonely and very depressed. He tries to distance himself from his friends, his relationships and his family. He avoids speaking to his parents, his brother D.B. and even Jane, the girl he was in love with. Evidently, Holden has a habit of lying and he occasionally does it to avoid speaking to others like his friends and even people he hardly knows anymore such as his brother’s ex-girlfriend. Furthermore, he chooses not to return to his home to see his family who he already shares an emotionally distant relationship with and lastly, he completely avoids speaking to his crush because of his nervosity and fear of rejection. All of this harms his well being and causes his loneliness. To conclude, many believe Holden is an outcast to society in the 1950s as it can also be claimed that he caused himself to become this way based on his voluntary social detachment.

Loneliness and Isolation in "The Catcher in the Rye". (2019, Dec 11). Retrieved from http://studymoose.com/loneliness-and-isolation-in-the-catcher-in-the-rye-essay 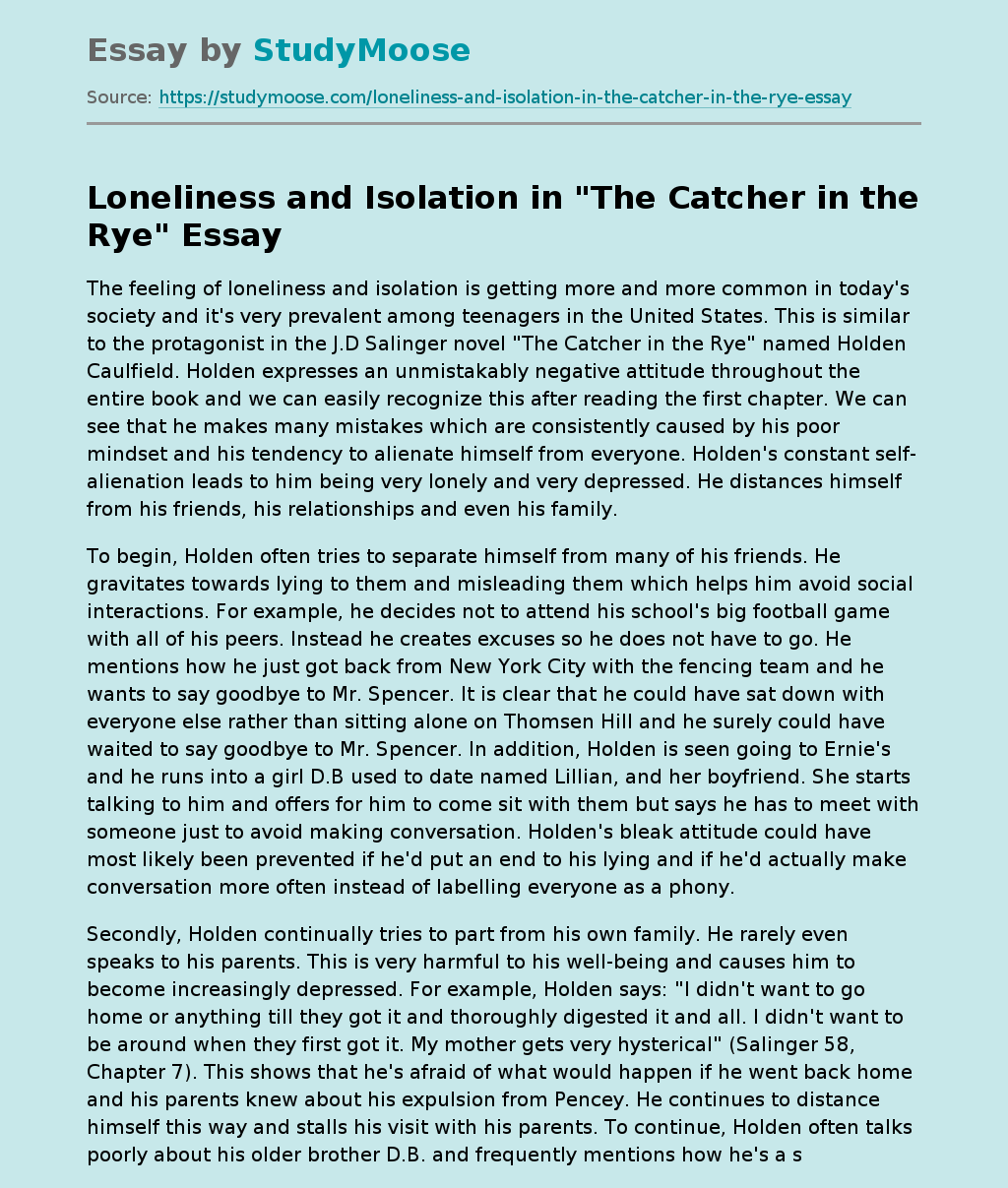