The Curious Incident of the Dog in the Night-Time: the Value of Truth

“This novel demonstrates that telling the truth is not always the right thing to do.” Discuss

Mark Haddon’s ‘The curious incident of the dog in the night-time’ explores the value of truth along with its positive implications as opposed to lying, with its negative connotations. Haddon utilizes several events in the novel to demonstrate that telling the truth is always the right thing to do. The novel illustrates that truth is always revealed despite lies that cover it in addition to its depiction of how more parties benefit from truth over lies.

Don't use plagiarized sources. Get your custom essay on
“ The Curious Incident of the Dog in the Night-Time: the Value of Truth ”
Get custom paper
NEW! smart matching with writer

Although there are circumstances in which the novel’s Asperger affected protagonist Christopher deems white lies acceptable, his mental condition and obsession with logic ultimately render his claims unreliable.

The notion that truth will always inevitably reveal itself is a recurrent one in the novel. The characters in the novel repeatedly lie in order to protect each other. Haddon includes Mrs Alexander in particular to reinforce his argument though that lying is futile in the sense that the truth should be told in the first place.

Her innocent revelation that Mr Shears and Christopher’s mother were “doing sex”, understandably came as a total shock to Christopher. He thought that his mother died of a heart attack and more importantly that his father “always tells [him] the truth”. Haddon’s way of saying that keeping secrets an ultimately lying, is futile.

Throughout the novel, Haddon places his characters in situations that they may find acceptable to lie in; his attempt to show that making the decision to lie always backfires.

In particular, when Christopher Evidently, Haddon used Ed and Christopher to prove that even when lies are used to protect or perhaps respect someone, the process of lying is futile and thus, never justifiable.

The Curious Incident of the Dog in the Night-Time: the Value of Truth. (2017, Jan 26). Retrieved from http://studymoose.com/the-curious-incident-of-the-dog-in-the-night-time-the-value-of-truth-essay 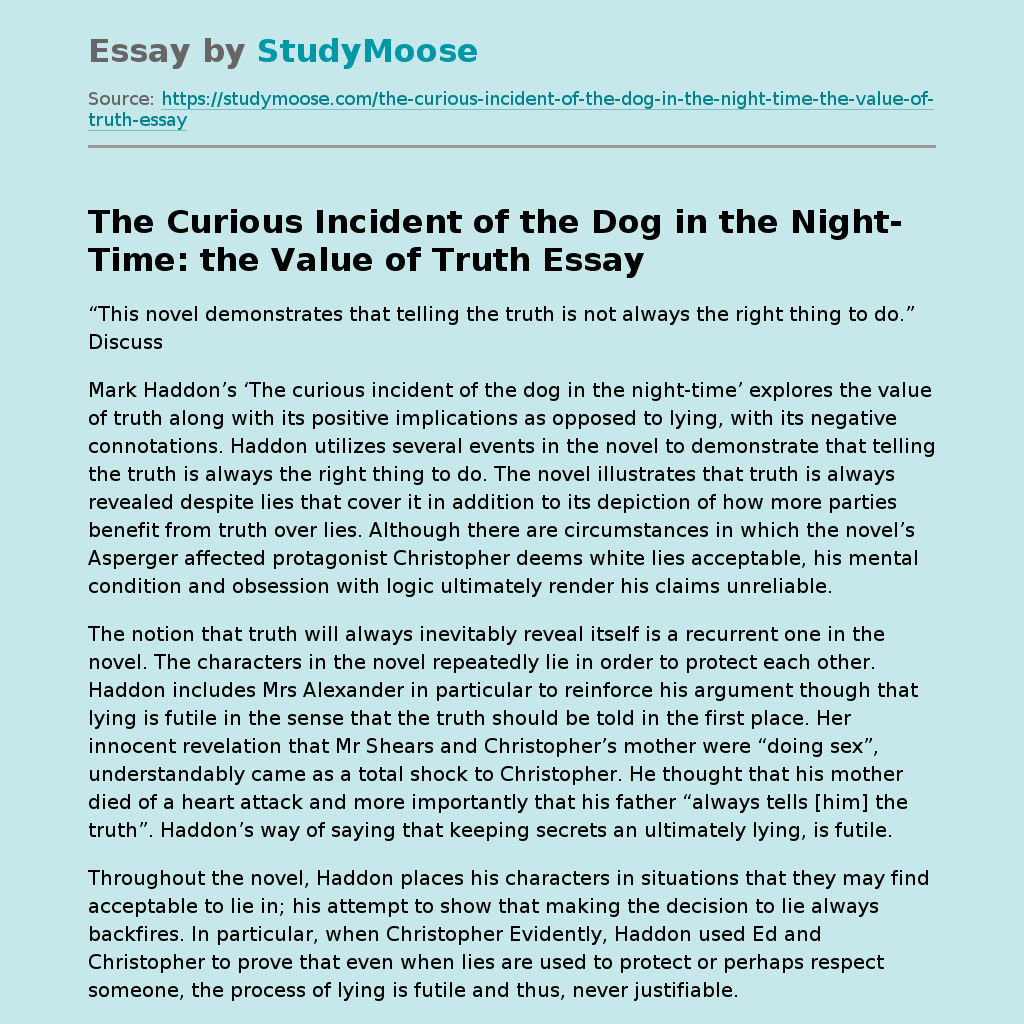