Curious Dog in the Night time

Challenges Faced by Christopher Boone Christopher Boone is an autistic child who is the main character of the Curious Incident of the Dog in the Night – Time by Mark Haddon. An individual must overcome difficult challenges in order to gain a sense of maturity. This will be demonstrated by examining Christopher Boone’s ability to learn to be persistent and to learn from his mistakes. He learns to be persistent by finding the killer of Wellington. He learns from his mistakes by taking a train to London to live with his mom.

Don't use plagiarized sources. Get your custom essay on
“ Curious Dog in the Night time ”
Get custom paper
NEW! smart matching with writer

Christopher father and the murder of Wellington make Christopher persistent o investigate and find the killer.

After leaving the police station Christopher’s dad constantly told Christopher to stop investigating. His dad says, “l said leave it, for God’s sake” (Haddon, 21). This quote shows that Christopher Just wants to help find the killer, since he likes dogs and Wellington was a friend and is persistent to find the killer. To escape the promise that his dad made him make, he starts a conversation with someone that knows about Mr. Shears or Wellington, so that the person can talk about it themselves in the conversation. After Mrs.

Alexander asks Christopher to alk with her in the park he thinks, “And I thought that she might tell me something about Wellington or about Mr. Shears without asking her, so that wouldn’t be Shaikh 2 breaking my promise” (Haddon, 54). Clearly, Christopher does not want to obey his father and wants to find the person who killed his friend, which shows him being persistent, since his dad already told him not to investigate about the murder.

After his dad tells twice not to investigate on the murder of Wellington, Christopher continuously looks for the killer and investigates even though his father told him not o.

Christopher going to London to live with his mother by himself makes him learn from his mistakes. Being autistic is it very hard to handle too many people near you. On the train there were too many people, due to the number of people wanting to go to London. Christopher says, “There were lots of people on the train, and I didn’t like that, because I don’t like lots of people I don’t know and I hate it even more if I am stuck with lots of people I don’t know, and a train is like a room and you can’t get out when it’s moving” (Haddon, 158). Christopher also relates to a memory where he is in car with two other kids.

He says, “But I started screaming in the car because there were too many people in it (Haddon 158). Later on he also says, “l tried to get out of the car, but it was still going along and I fell out onto the road” (Haddon 158). This and Polly. To prevent Shaikh 3 himself from throwing himself out of the train and getting hurt he stood very still and didn’t move. Christopher says, “So I stood very still in the train carriage and didn’t move” (Haddon, 158). This quote shows that he doesn’t want to touch anybody, and cream, or toss himself out of the train and get hurt.

Christopher learned from his mistakes because he thought about the injuries and then decided whether he would jump off or not. After Christopher got out of the car while it was still going he said, “l had to have stitches in my head and they had to shave the hair off and it took 3 months for it to grow back to the way it was before” (Haddon 158). This shows that he knows what is going to happen if he Jumps off the rain because of the number of people on the train. All of this information shows that Christopher learns from his istakes because this time on the train he thought about what will happen if he does jump off the train.

An individual must overcome difficult challenges in order to gain a sense of maturity. This will be demonstrated by examining Christopher Boone’s ability to learn to be persistent and learn from his mistakes. He learned to be persistent, because he kept on investigating to find the person that killed Wellington, even though his dad constantly told him not to. He learned from his mistakes, by thinking about the injuries from the last time and then decided whether or not to Jump off.

Curious Dog in the Night time. (2018, Sep 29). Retrieved from https://studymoose.com/curious-dog-in-the-night-time-essay 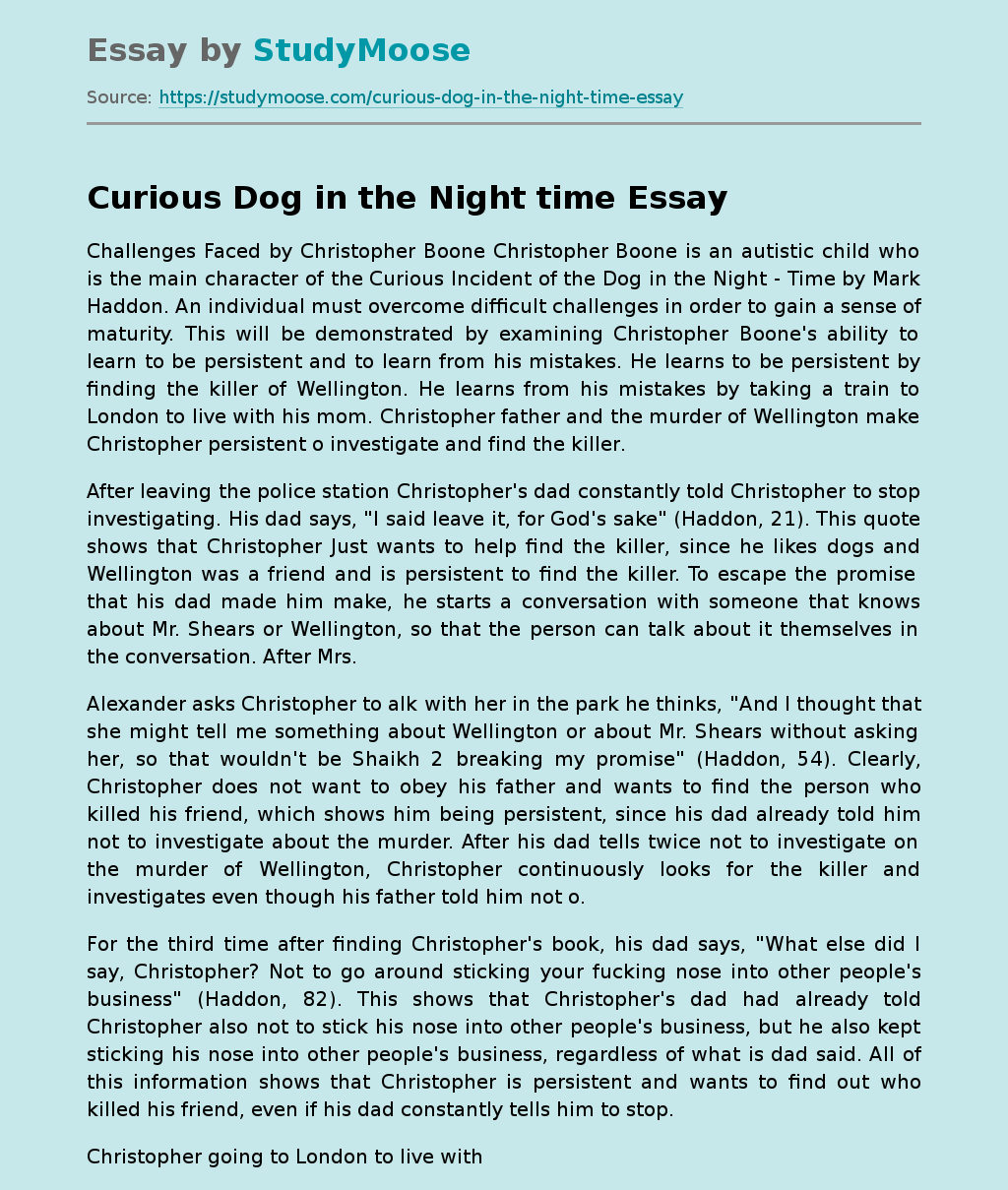