The Curious Case of Benjamin Button Film and Book Compare/Contrast

Originally written by F. Scott Fitzgerald, The Curious Case of Benjamin Button is a short story unlike any other. It tells the story of a man who is born as a fragile, elderly individual who physically, becomes younger as he grows older mentally.The warped sense of time and aging in this story makes it incredibly unique and interesting. In 2008 the story written by F. Scott Fitzgerald was made into a film. Although the film and the short story are telling about the same man, they are wildly different.

Turn in your highest-quality paper
Get a qualified writer to help you with
“ The Curious Case of Benjamin Button Film and Book Compare/Contrast ”
Get high-quality paper
NEW! AI matching with writer

Although there are some similarities in the theme, the character development, plot and conflict, and setting are very different.

The setting of the short story and film are in two complete different times, which makes them very different. In the short story, Benjamin Button is born in 1860. He lives in a time where young, rich males go to ivy league schools, and courtship is more or less an art form. During his life, Benjamin fights in the Spanish-American war in 1898.

The film The Curious Case of Benjamin Button takes place in the 21st century. In the film Benjamin is born in 1918, at the end of World War I. This is fifty-eight years later than what is mentioned in the original story. This changes many different aspects of the story. In the film Benjamin is growing up in a time where there are cars and telephones, and other modern technology. The people in the story are far less pretentious it seems, because social customs are different.

Along with the setting of the two stories, the development of the characters also differs in many ways.

In both stories, Benjamin begins his life as an old man, and grows younger and younger each day. In the short story, Benjamin actually begins his life as a full grown, seventy year old man. In the opening scene it describes Benjamin sitting in the bassinet wrapped in a blanket, both of which are much too small for him. Although it may seem comical, Benjamin’s father and all of the nurses and doctors see this as a horrific, unexplainable phenomenon. Along with looking like an old man, he also has the mannerisms and desires of one. Mr. and Mrs. Button try their hardest to raise Benjamin as an actual child, and he shows resistance every step of the way. He dislikes all of the toys and baby things his parents buy him. He does not want to play with the other kids, and spends his time smoking cigars in his room. With age Benjamin mentally becomes younger and younger. His mentality matches his physical age more than his actual age. The Benjamin in the film however develops much differently. When he is born, Benjamin is an actual baby. He then grows into an old man at the beginning of his life. Although he appears to be an old man, mentally he is still a young boy. He plays around in his wheelchair and gets along with Daisy more than anyone else, because she is close in age to his. The longer he lives, the more mature he becomes, unlike in the short story. Because of this development, there are many conflicts in the stories that differ greatly as well.

From the first few scenes of both stories, the film and the short story already begin to differ. In the short story, Benjamin is raised by both his mother and. They try their hardest to suppress his elderly mannerisms and treat him like a young child. They buy him children’s toys and only allow him to eat food fit for a toddler. In the film however, Benjamin is not raised by either of his parents. After childbirth, Mrs. Button dies leaving Mr. Button absolutely devastated. He is so distraught that he even considers throwing his newborn baby into the river. Luckily however he is stopped from committing this crime, and instead leaves Benjamin on the step of a random home. This is an old folks home run by a woman named Queenie, who raises Benjamin as her own. he is raised as the young boy he wishes to be. Although confined by a wheelchair, he is allowed to play with toys and interact with whomever he chooses. He lives a very happy life. Another incredible difference between the film and short story is Benjamin’s relationship with his wife. In the short story, Benjamin meets Hildredge when he is in his twenties, psychically he is in his fifties. She says that she admires older men, therefore she is interested in him.

As their relationship progresses, and their ages change more and more, Benjamin begins to resent the girl he once loved. He wants to live as a youthful young man who is not tied down by a wife. Eventually their relationship crumbles and she ends up leaving, and that is the last time the story mentions her. Benjamin’s relationship in the film however is glaringly different. Benjamin meets Daisy (which is different from the short story) when he is only about seven. They grow up together, and he falls in love with her throughout many years. They end up marrying despite Benjamin’s condition. The were incredibly in love and their lives were happy for a very long time. Once they learn that Daisy is pregnant however, Benjamin becomes apprehensive about his aging, and leaves soon after the birth of their daughter. Although he leaves, he never stops loving Daisy, which is the biggest difference between the story and the film. Once Benjamin begins his descent in age, he is unable to care for himself. Because she still loves him, Daisy cares for Benjamin until he dies. Their relationship develops from one of passion between lovers, to the caring love between a son and a mother. Between all of these differences, there are however some similarities between the two. The theme would be one of the most obvious of these.

The short story and the film appear to have the same theme that is portrayed in different ways. The theme of The Curious Case of Benjamin Button would be to live the life you are given to the best of your ability. In both cases this is what Benjamin does, the film and the story just show different ways of him doing this. In the short story, Benjamin lives his life the way that he believes he should according to his mental age. He makes an effort to interact with other children, tries to attend Yale, and marries a woman whom he loves. Although these things may not have made him happy all the time, he did his best to live the life that he was given. In the film, Benjamin makes the best of every situation, and does what makes him happy. Instead of doing what he is expected to at his age, he does whatever he likes. He becomes a fisherman, visits a brothel, and plays with Daisy, all because these are the things that he enjoys. He is given a difficult life to live, and instead of letting it hinder him, he does what he enjoys.

The film and the short short story The Curious Case of Benjamin Button are both unique and interesting in their own way. Although they tell a story about the same man with the same aging condition, they are two completely different stories. With different settings, conflicts, and character development the stories are almost opposite. These differences however to no change the theme of the story which I have determined to be “You must live the life you are given to the best of your ability in order to be happy”. 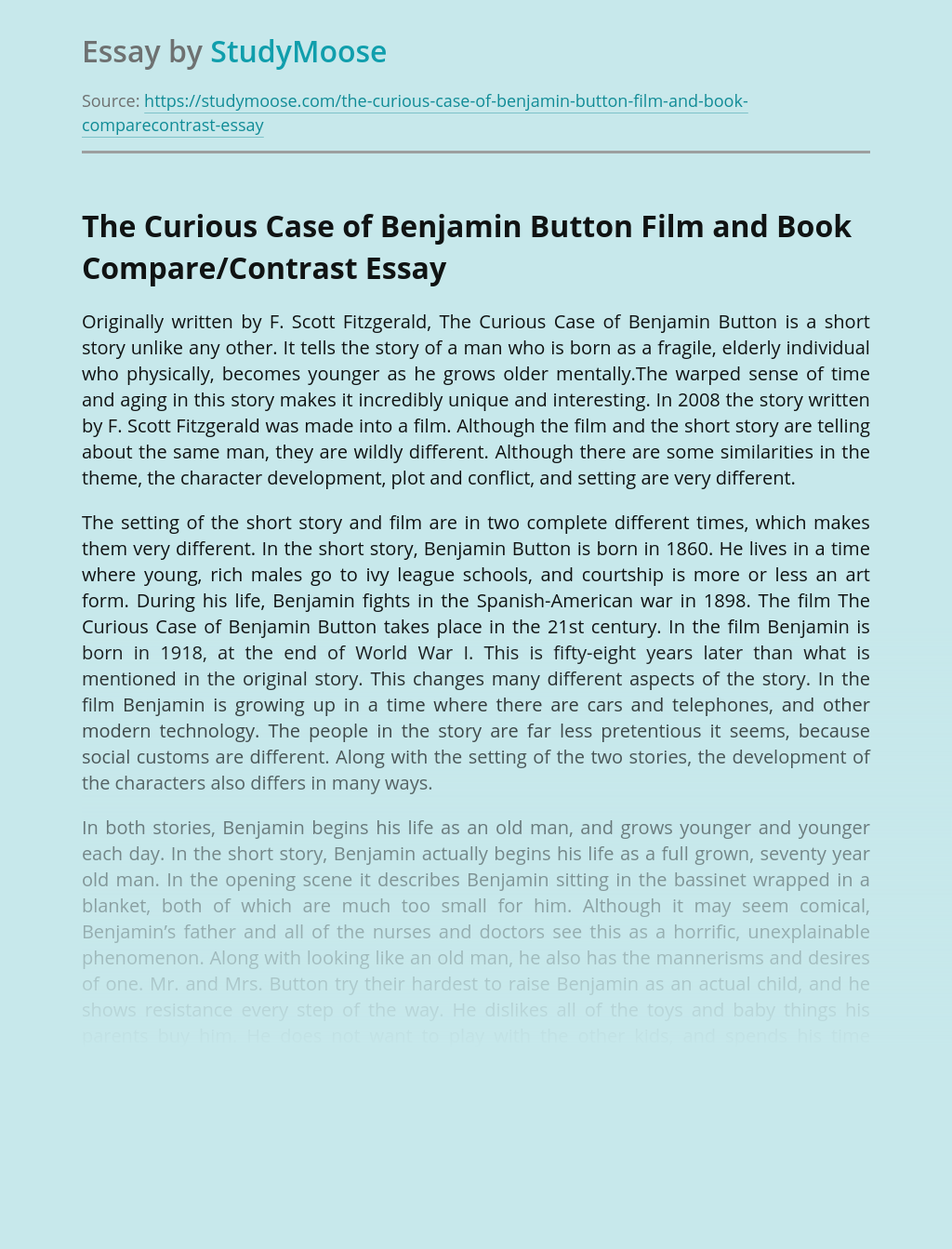 Turn in your highest-quality paper
Get a qualified writer to help you with
“ The Curious Case of Benjamin Button Film and Book Compare/Contrast ”
Get high-quality paper
Helping students since 2015
Stay Safe, Stay Original