The Curious Case Of Benjamin Button

The short story of Bemjamin Button by F. Scott Fitzgerald involves the life of an individual who ages in reverse. In the story Benjamin Button starts from birth as a shriveled old man, to his death as a seemingly newborn infant. He experiences the natural aging process backwards. In psychology there are four levels of Psychological explanation. These include the biological, personal, basic process and socio cultural level of explanation.

These four levels are evident in the story of Benjamin Button. Applying these levels can give great insight to the inner explanation of peoples actions. The biological level demonstrates the natural processes in our body that cause the ageing process.

This includes examples like hormonal imbalance and its effects. In the story Benjamin suffers because of this level of explanation. In his case he ages in a biological reverse. The biological process is said to be unstoppable1, and in the years of his life he went from an old man to a young man.

However there were positives from his birth, because as his body and hormones changed, his blood started flowing faster, making him more agile and mobile for the best period of his life. After this period, his life made a rapid decline due to the same development.

The personal level demonstrates the different experiences and personalities of the person. This is to the point where it affects his decisions and actions. Benjamin was born with an old personality, and within time he began to change the way he saw himself.

This meant that he started to like his relation and interactional changes, and his self-image lifted. However these changes soon began to affect him negatively, and at his peak he had lived 50 years. After finally reaching the age where he had control, the mental scars of his past crept into his thought process. These are ever present in his mind from the times when he was not accepted by society.

The basic processes level is the cognitive part of explanation; this means that it is involved with the mental processes of an individual. Examples include how our mind works, how we cope and explain things, memory, language and how we solve problems. At an early age of his lifetime, Benjamin was already past his peers with his knowledge base cognitively and emotionally. The emotional changes that were taking place inside of him seemed to be sever present in his marriage, where he begins to grow apart from his wife. In the story Benjamin’s wife begins to become too boring for him, and his emotion begins to turn towards youth, with his wife going the other way, with an opposite thought on marriage.

The final level is the social cultural level. This includes how the people around us can change and affect our actions and thoughts. This is because we like to belong and conform to social norms. People around Benjamin at the time would have viewed certain actions he performed to be adverse for someone his age. In the story Benjamin would have had to think about how everyone else saw his actions. His parents were also enforcing the socio cultural level where they imposed expectations on him, such as playing with toys when Benjamin was at a much more advanced stage in life. In a sense they were trying to create the illusion that they had a child. Whenever we are trying to draw conclusion from a text, we must understand that there are ethical consequences.

The curious case of Benjamin Button provides great insight into psychological development, but we must be careful when viewing it factually because in every essence the book is fictional. Generalizing this story on modem day society would also pose issues, because of the fact that it was published in 1922 and it is the author’s perception from the time it was developed. Also when diagnosing from any text, we must also consider that people are different and do not always fit into one neat category. Wrongly diagnosing could have a fatal effect. There are four levels of psychological explanation. These levels are a construct that helps us to better explain the human race and how it thinks. These include the biological, personal, basic process and socio cultural level of explanation. Benjamin Button lived through these levels in an inverse order. With analysis, evaluation and investigation on his story we can create better understanding of human processes, but we must remember the ethical considerations before beginning to diagnose real world figures.

The Curious Case Of Benjamin Button. (2016, Apr 18). Retrieved from http://studymoose.com/the-curious-case-of-benjamin-button-essay 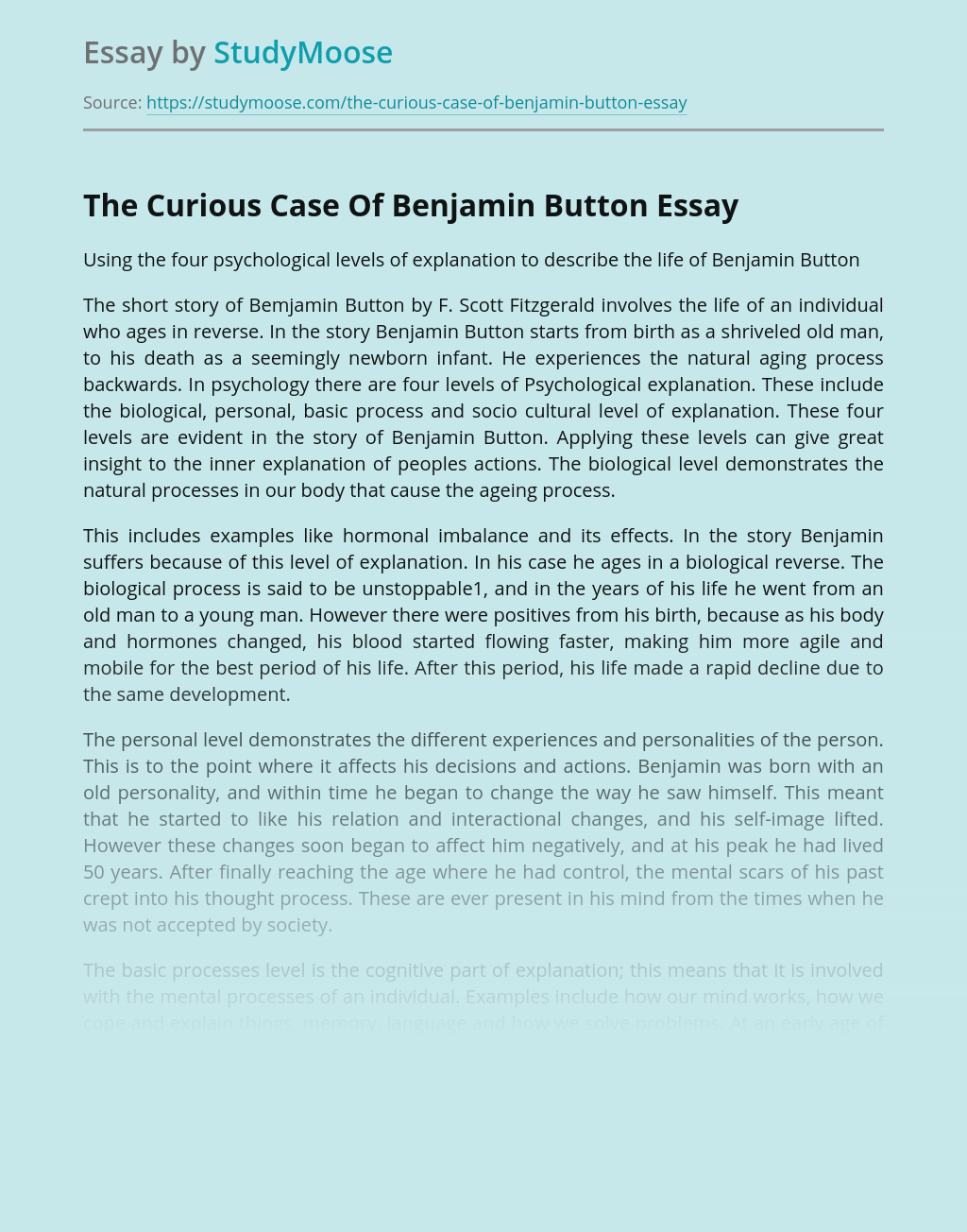 Don’t waste time
Get a verified writer to help you with The Curious Case Of Benjamin Button
Hire verified writer
$35.80 for a 2-page paper
Stay Safe, Stay Original