The uses of reverse psychology in "The Cask of Amontillado"

“Neither by word nor deed had I given Fortunato cause to doubt my good will. I continued…to smile in his face, and he did not perceive that my smile now was at the thought of his destruction.” These lines show us Montresor’s true intentions of deceiving Fortunato into death with out him knowing of it. A mission well accomplished thanks to the help of Reverse Psychology.

The ideal definition of reverse psychology is the ability to obtain something from someone with out asking for it.

Don't use plagiarized sources. Get your custom essay on
“ The uses of reverse psychology in “The Cask of Amontillado” ”
Get custom paper
NEW! smart matching with writer

How Montresor used reverse psychology against Fortunato into making him come down into his death trap is very interesting. The story begins around dusk, one evening during the carnival season (similar to the Mardi gras festival in New Orleans) in an unnamed European city. The location quickly changes from the lighthearted activities associated with such a festival to the damp, dark catacombs under Montresor’s palazzo which helps to establish the sinister atmosphere of the story.

It all starts when Montresor deceives his friend (Fortunato) into going down into the catacombs with him to give him some feedback or advice on the cask of amontillado hat he recently purchased.

Already knowing that Fortunato was a man of arrogance and overwhelming self pride, Montresor decides to use this to his advantage. He makes Fortunato eager to come taste his cask of amontillado by mentioning that he was on his way over to ask Luchesi whether he could come and give him some feed back on the new cask of amontillado that he recently purchased. Montresor knew that by saying this he would be triggering Fortunato’s overwhelming pride to take control of him and make him do things he would not do in normal circumstances. By saying this he made Fortunato want to come and willingly inspect the cask of amontillado.

Reverse psychology is the ability to make some one want to do something that they would not want to do normally. This is proven when Montresor doesn’t even ask Fortunato to come and inspect him amontillado. Yet Fortunato forces Montresor into taking him down into the vaults so he could taste the Amontillado (of coarse this is what Montresor had been waiting for all-night). The amazing Montresor amplifies Fortunato’s eagerness to taste the Amontillado even more when he mentions that he should go back since he is not in good shape (Fortunato was suffering from a slight cold) and that he would just call Luchesi and make him taste the amontillado instead. Fortunato’s reply was “Let us go, nevertheless. The cold is merely nothing. Amontillado! You have been imposed upon. As for Luchesi, he cannot distinguish sherry from Amontillado”.

At this moment Montresor had come to an understanding that Fortunato had fallen into his trap, the more he persuaded him into not going down into the catacombs with him, the more he was eager to.

A victim to reverse psychology was Fortunato, and that was what lead him to his death. Finally Montresor and Fortunato entered the catacombs and walked towards where the amontillado supposedly was. It is here where Montresor builds a wall around the intoxicated Fortunato, and it is here where Fortunato dies as a victim of his pride, and most importantly as a victim of reverse psychology.

The uses of reverse psychology in "The Cask of Amontillado". (2016, Jun 19). Retrieved from https://studymoose.com/the-uses-of-reverse-psychology-in-the-cask-of-amontillado-essay 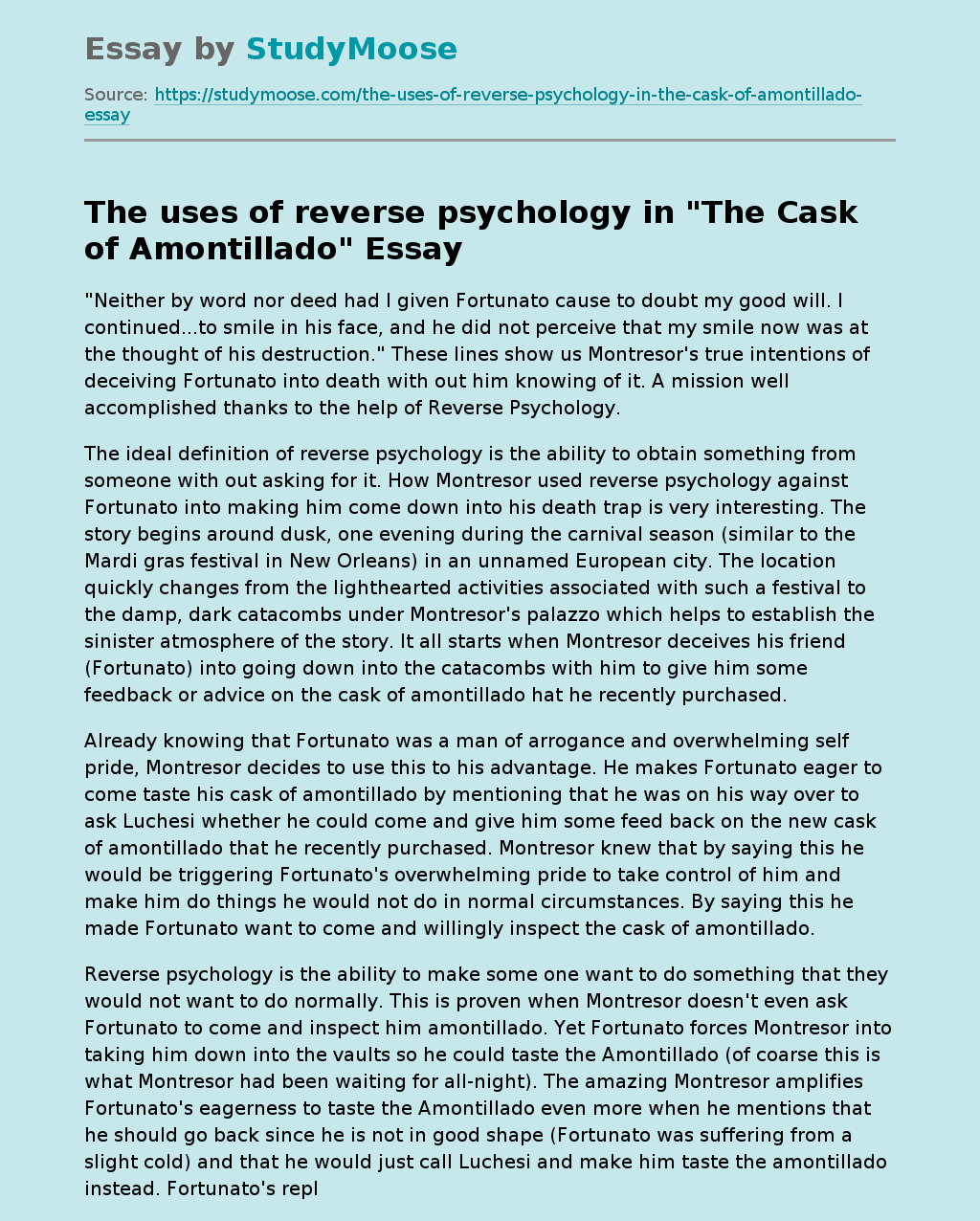