The character of Montresor in, “The Cask of Amontillado” is one who can only be defined with words along the lines of evil, or wicked. He vows to avenge the bold and childish Fortunato, whom Montresor swears did him wrong. Montresor could be described with many bold words, one being guilty. Though he is guilty, he is determined not to get caught. For instance, Montresor declares, “I must not only punish, but punish with impunity” (Poe, 1). Essentially, he is saying he will seek revenge on Fortunato, but he will get away with the vicious crime.

Don't use plagiarized sources.
Get Your Custom Essay on Cask of Amontialldo – Character Traits Just from $13,9/Page

Another obvious character trait for the devious Montresor, is dishonest.

He claims to have obtained a cask of Amontillado, when the reader can tell through situational irony this is not true. He claims, “… I have received a pipe of what passes for Amontillado, but I have my doubts” (Poe 1). Fortunato unknowingly follows the fiend, and in theory, seals his own fate. Montresor is also quite sneaky.

He slyly gets Fortunato into a small inlet in his wine cellar– also a home for skeletal remains. He hastily chains him up before the poor Fortunato can even realize what’s happening.

Explaining the situation, Montresor says, “… inding his progress arrested by the rock, stood stupidly bewildered… a moment more and i fettered him to the granite” (Poe 4). Lastly, Montresor is just plain mysterious. Readers never know exactly why he decided to go after Fortunato, but it is hinted he offended the killer in some way. When asked about his coat of arms, Montresor blatantly states, “A human foot… the foot crushes a serpent rampant whose fangs are imbedded in the heel” (Poe 3). The motto underneath is “nemo me impune lacessit” (Poe 3). To conclude, Montresor plays not only a degrading character, but one of many evils. 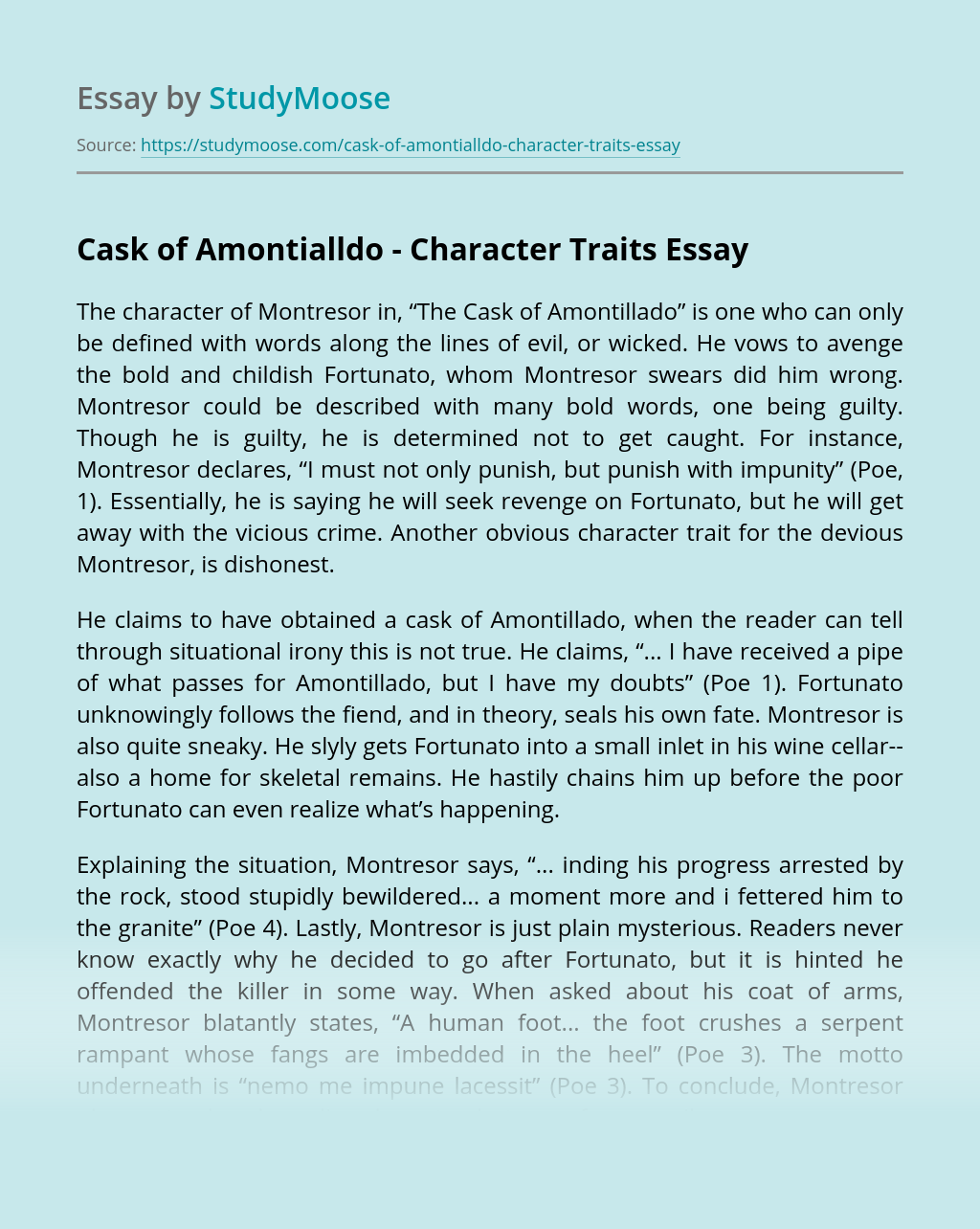 During her higher studies Nina has fallen in love with Rahul. He is fifteen years older than her, a professor in the English department at the arts faculty. As their relationship develops, Nina unknowingly likes Rahul. It is her first experiences; she offers her heart expects in return she imagines that the combined forces of...

Finally, cosmetic surgery can cause an addiction by society trends and Body Dimorphic Disorder. No one is perfect, and there is no “perfectism” either. People often complain about something on their body. They may think that their noses are shorter than others. Maybe, they think beautiful women should have big eyes. Sometimes, they may wish...

Get Essay
Baybayin: in the Perspective of Filipino Youth

Other than this, Santos (1995) put emphasis on this ancient writing system as a tool for nationalism and pride. He states that after learning more about the script, “You might just feel prouder that you are Filipino.” This bill, once implemented, would bring about a great change in the country. Of course, it will have...

What needs and wants are fulfilled by karaoke singing In my view, I would say there are 2 types of needs one’s can achieve from karaoke singing, first of all, it would be the social needs to network with people (eg. socializing/mingle around with people would portrait a sense of belonging). Secondly, to some people...

On September 17, 1787, thirty-nine of the delegates to the Constitutional Convention, held in the summer heat of Philadelphia for four long months, signed the document for which they had labored so hard to produce. During both the drafting of the Constitution and the ensuing debates over its ratification, the struggle to procure the new...