The novel a Curious Incident of a Dog in the Night-time by Mark Haddon is a murder mystery novel narrated by the 15-year-old character Christopher Boone. Throughout the text, Haddon moves the audience to experience life through the eyes of someone who is unable to grasp the subtlety of interactions with others and societal norms due to a mental disorder. Christopher’s disorder shapes what we are able to experience and learn, but also subverts the structural features of the text to openly flout the rules of conventional storytelling.

Don't use plagiarized sources. Get your custom essay on
“ Narration in The Curious Incident of the Dog in the Night-Time ”
Get custom paper
NEW! smart matching with writer

In doing so, Haddon is able to explore everyday settings in an unconventional manner due to the unique voice of the narrator, allowing him to portray ideas about the differences that exist within the world he has created as well as in contemporary society.

The structure and genre of a Curious incident of the dog in the night-time are subverted from the beginning, this allows Haddon to portray some interesting differences through the narrative organization.

In the opening chapter the novel is portrayed in the ‘whodunnit’ genre of a murder mystery, with the opening being written in short, sharp sentences that were written in a way that created tension, “it was 7 minutes after midnight.” Once the victim is shown to be a dog and the style of the novel changes and relies on deadpan narration and the use of emoticons to communicate the story, the audience realizes that the text is not going to be conventional. Throughout the murder investigation, the narrator Christopher Boone uses the structure of a detective novel to convey his story.

He uses jargon associated with the murder mystery genre such as ‘red herrings’ and ‘prime suspect’ to refer to Mr. Shears, and makes frequent intertextual references to other crime fiction novels, such as ‘The Hound of the Baskervilles.’ Unlike other crime fiction novels, the conclusion of the crime is solved in the middle of the novel when Christopher’s father Ed Boone confesses to killing the dog and to lying to Christopher about his mother’s death. With the dog killing solved the focus of the novel shifts to Christopher trying to find his mother and escape his father as he no longer feels safe being around. “I had to get out of the house. Father had murdered Wellington. That meant he could murder me”, from this point on the genre changes from murder mystery to coming of age as Christopher begins to show his independence by leaving the familiar town of Swindon to search for his mother. Christopher has to overcome his disorder while navigating London, showing the switch from murder mystery to coming of age. By changing the genre halfway through the novel, Haddon successfully adopts a different way of storytelling that is both engaging to the reader and represents aspects of life.

With Haddon choosing the unconventionality of Christopher as the narrator, he provides the audience with a refreshing insight into the different ways people communicate with one another. Christopher’s alternative methods of communication are a result of his disorder and are addressed at the begging of the novel with the use of emoticons. Christopher states that he understands and can see happiness and sadness but he was “unable to say what these meant.” This shows Christopher’s inability to grasp the nuances of conversation, these form the basis for many of the jokes in the novel. An example of this would be how Christopher and his father spread their fingers out in a fan and their “finger and thumbs touch each other”, this emotional exchange is initially heartwarming, but later in the text Christopher threatens to cut of a strangers fingers with a knife, as the man backs away he spreads his fingers out like “he wanted to say he loved me”. Christophers’ inability to comprehend body language allows the audience to consider this aspect of life from an entirely different perspective to our own. This is further presented to us as the text is physically shaped by Christopher’s methods of communication. For example, when Christopher emphasizes points or concepts he utilizes capitalization such as “Behavioural Problems” or “Super Good Day.” The use of capitalization later changes into garbled graphics that are used to represent Christopher’s experience of sensory overload caused by the signs in London. The novel contains digressions such as diagrams of constellations that are used to communicate Christophers thought patterns to the reader. Through this, Haddon allows the reader to consider the world from the perspective of someone with a disorder and develop a greater level of empathy for those who think differently.

An aspect of the text that diverges from the nom is Haddon’s realistic portrayal of the contemporary family unit. In the novel Christophers Father Ed Boone is his caregiver, Ed is portrayed as a dedicated father with a dark temper. Initially, Christopher relies heavily on his father as the embodiment of morality, “loving someone is telling them the truth, and Father always tells the truth”, this makes Christopher feel safe. Unfortunately, Ed’s temper is what causes his relationship to Christopher to collapse, as he reveals to Christopher that he killed the dog in a fit of rage, “when the red mist comes down…” Ed’s fierce yet flawed Portrayal distinguishes him from a typical father figure that is typically found in coming of age novels, but this allows him to be a vastly more sympathetic and believable character because of it. The difference in Haddon’s portrayal of Ed Boone allows him to present interesting ideas about the family unit, moving away from the nuclear family archetype to something grittier and more realistic.

For a text to engage its audience, it needs to offer the reader a different perspective on life to allow us to change our views and understand the views of others. Haddon’s ability to narrate everyday settings and events through the perspective of an unconventional narrator allows him to portray new ideas about the differences that exist in the world he has created and contemporary society.

Narration in The Curious Incident of the Dog in the Night-Time. (2020, Sep 28). Retrieved from http://studymoose.com/narration-in-the-curious-incident-of-the-dog-in-the-night-time-essay 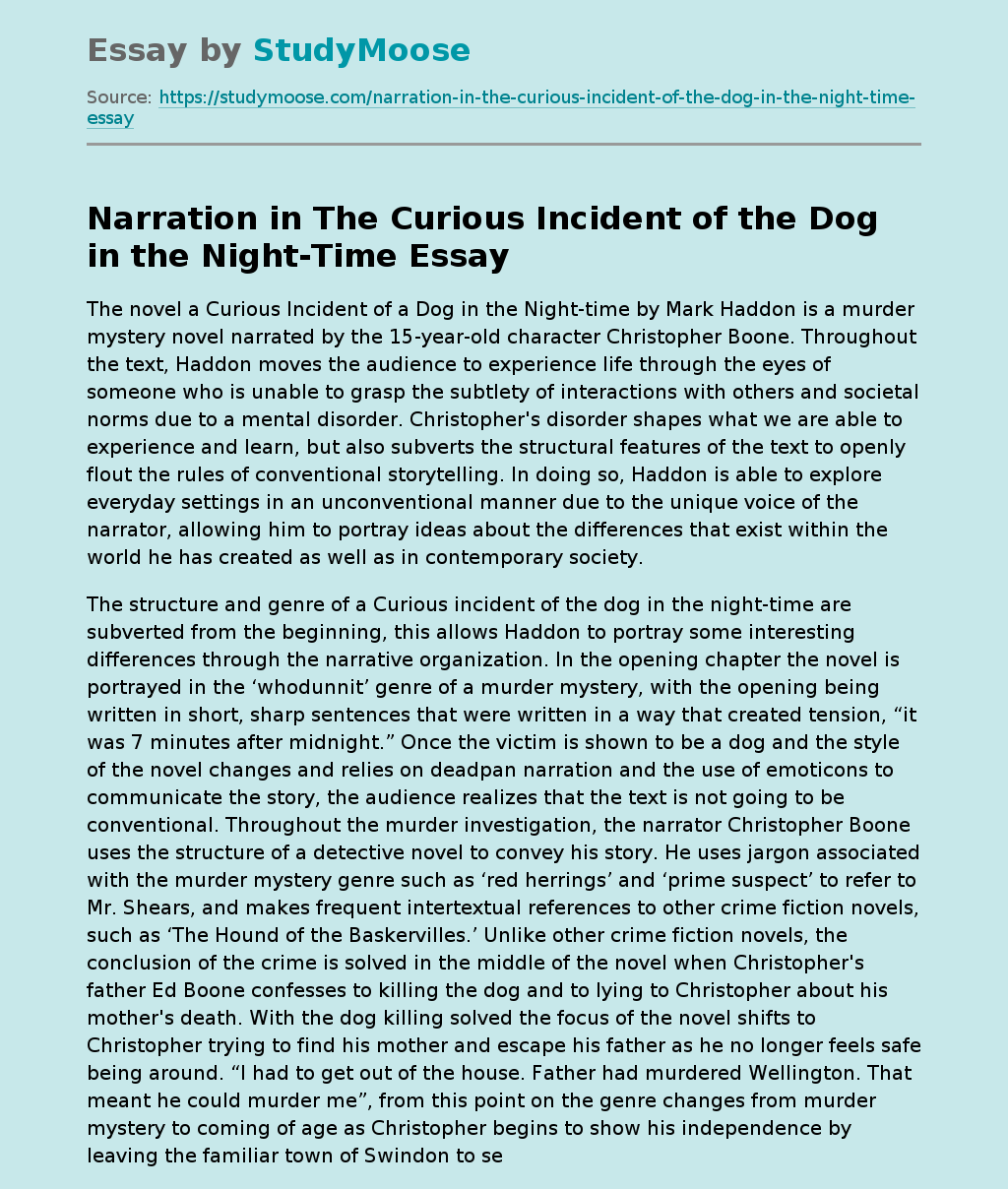