How does Mark Haddon use the first person narration in The Curious Incident of the Dog in the Night-Time?

In the words of Christopher Boone ‘The Curious Incident of the Dog in the Night – time’ is a ‘’murder mystery novel’’. This book takes you on a surprisingly effective journey through the world of 15 year old Christopher suffering from Asperger’s syndrome; a boy who turns to mathematics for comfort, who cannot eat foods if they are touching on his plate, and who judges the potential success of his day by the number of similarly coloured cars that pass him on the way to school.

Don't use plagiarized sources. Get your custom essay on
“ How does Mark Haddon use the first person narration in The Curious Incident of the Dog in the Night-Time? ”
Get custom paper
NEW! smart matching with writer

The story of the murder of Mrs Shears’s dog is told from Christopher’s perspective. Author, Mark Haddon’s use of the first person narrative is effective in the way in which it enables us to enter Christopher’s mind, it equally creates problems for the reader…

As a result of this Christopher sees life in a very logical way and tends to describe things in lots of detail. This lack of understanding is highlighted during the novel. Initially the way Christopher fails to understand Mrs Shears’s anger and horror at the discovery of her dog, and later his lack of understanding for his father’s unhappiness and regret. ‘’There was a policeman and a policewoman. The policewoman had a little hole in her tights on her left ankle and a red scratch in the middle of the hole.

’’ This quote shows Christopher’s logic and understanding and how he failed to realise that the policewoman had been hurt.

The Curious Incident of the Dog in the Night-Time is a murder mystery novel. Christopher tells us how he does not ‘’like proper novels.’’ The first person narration is good for the reader because it’s as if you are travelling with Christopher on a journey and you are there with him all the time in the book. As a reader you feel this way because in the book the ‘major’ events unfold to you and Christopher at the same time so as a character Christopher is facing new experiences, whilst you the reader are getting a shock. The reader and Christopher are both kept in the dark for the same amount of time until the truth gets revealed. ‘’Then I stopped reading the letter because I felt sick. Mother had not had a heart attack. Mother had not died. Mother had been alive all the time.’’ This quote shows the time when Christopher finds out that his mother had not been dead, and in fact alive. His reaction to this is not exactly ‘vivid’ however as a reader you could imagine in your head that moment and picture his facial expressions.

Mark Haddon’s use of the first person narrator makes the story seem more realistic as it lets the reader get an insight into not just Christopher’s but most of the character’s emotions. Even though Christopher himself doesn’t tend to show much emotion you can still paint an image in your head of what he is feeling, this is because of the way he narrates. The small yet detail he gives you along the story is beneficial as it enables you to become close to Christopher and understand him as a character. The details he notices of other people tend to be their body language; this information helps the reader to understand how other characters feel. Christopher finds it hard to read emotions and gets confused when he can’t think properly, as a reader you can relate to his frustration because of the way he responds to people and their actions. ‘’What else did I say Christopher? I thought that this might be a rhetorical question, but I wasn’t sure. I found it hard to work out what to say because I was starting to get scared and confused.’’

The downside to Mark Haddon’s use of first person narration is that the reader cannot fully experience what other people are feeling. The reader is restricted to mainly Christopher’s feelings and emotions as the book is written from his perspective. The fact that it is written from Christopher’s point of view means that everything we find out has already been processed through Christopher as he is the narrator. The disadvantage of this is that because Christopher has Asperger’s syndrome, it is harder for him to understand things like jokes and metaphors. ‘’ This will not be a funny book. I cannot tell jokes because I do not understand them.’’ This could be bad for the reader because Christopher is a very literal person so it is hard for him to add humour into the book and for that reason readers may not enjoy the fact it is written in first person.

Christopher tends to focus on other small details which seem relevant to him but as readers you feel as if sometimes it is just completely off topic. Another reason why Mark Haddon’s use of first person narration is not suitable is that, when Christopher narrates he tends to digress alot. When he talks he sticks to the topic however moments later he is narrating about another topic. ‘’Marilyn vos Savant said that you should always change and pick the final door because the chances are 2 in 3 that there will be a car behind the door.’’ This quote was taken from a chapter which started off by Christopher talking about why he liked maths and how his teacher said that Christopher liked maths ‘’because it was safe.’’ The chapter ended with a tree diagram showing outcomes of a game show, where the topic started, and where it ended were in two quite different places!

In conclusion, I think that Mark Haddon has successfully written this book in first person although if the book was written in third person we would gather more information from all characters and their feelings, alternatively, as it is written in first person, Mark Haddon tells Christopher’s story with warmth and humour which makes us see Christopher’s problems at the same time that we experience everyone else’s frustrations in dealing with him. By having Christopher as a narrator it allows you to enjoy those situations that may happen in real life. The suspense that builds up throughout the story is great as it keeps you on the edge of your seat as you don’t know what is going to happen next! I personally enjoyed reading this book from Christopher’s point of view as it lets you imagine how people deal with Asperger’s syndrome as well as how they act with the syndrome.

The first person narration is effective because I think it made the book seem more realistic because in reality that is probably what would happen, if you were to go onto a train for the first time alone then you would most likely be scared.”Then the train wobbled a lot and I had to hang onto a rail and we went into a tunnel and it was noisy and I closed my eyes and I could feel the blood pumping in the sides of my neck.’’ I think the way in which the author has captured Christopher’s emotion and feelings is unique because as a reader I first thought It was boring to be reading a book from his point of view, however as the story went on I realised that it is quite fascinating to be reading from someone who has Asperger’s syndrome. Overall I thought this book was quite extraordinary and the first person narration was used quite effectively.

How does Mark Haddon use the first person narration in The Curious Incident of the Dog in the Night-Time?. (2017, Nov 02). Retrieved from http://studymoose.com/how-does-mark-haddon-use-the-first-person-narration-in-the-curious-incident-of-the-dog-in-the-night-time-essay 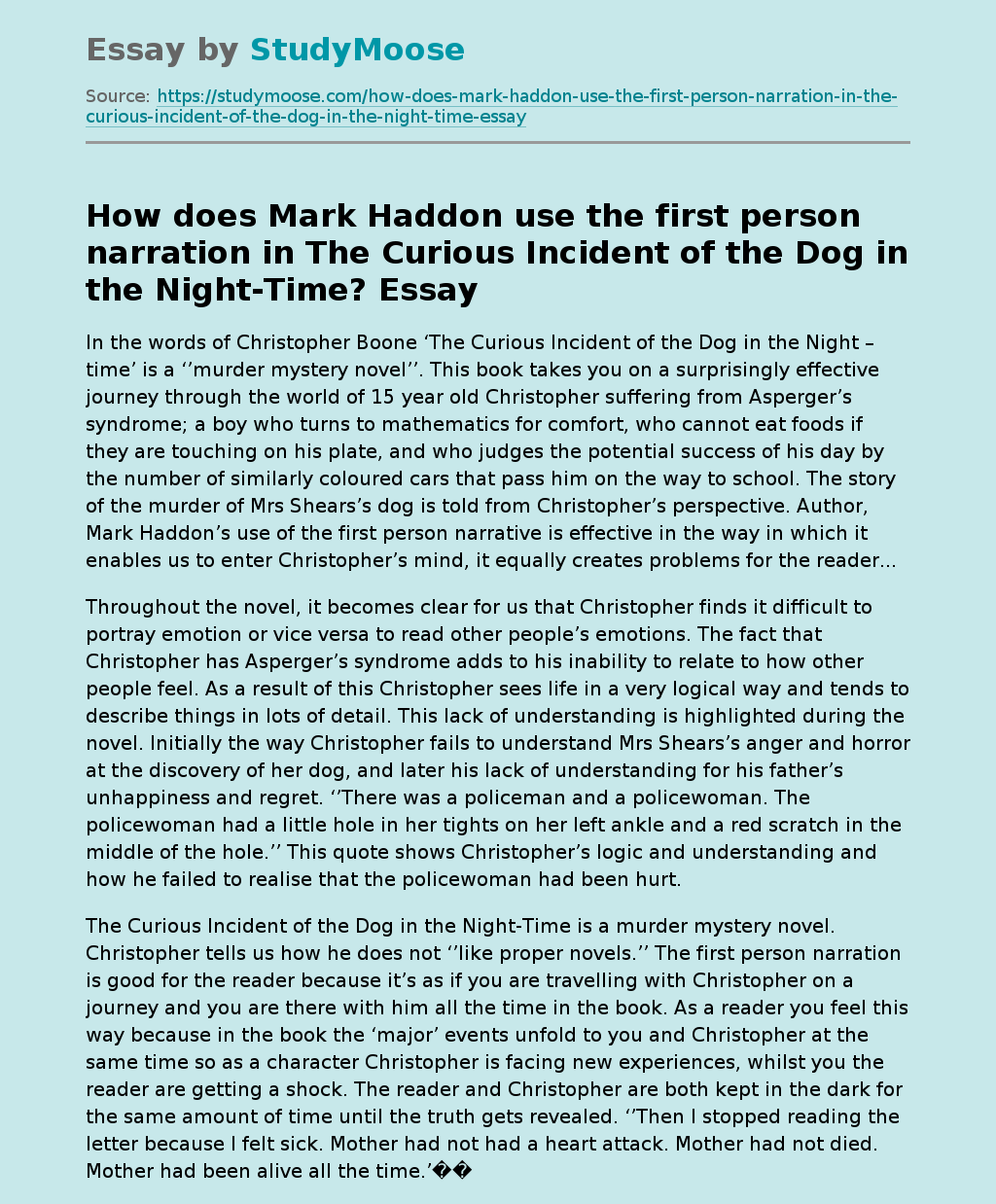