The Curious Incident of the Dog in the Night Time Depicts Human Communication as Problematic. Do You Agree?

In The Curious Incident of the Dog in the Night Time, Mark Haddon explores the importance of communication and both its positive and negative impacts on the characters of the novel. While Haddon emphasises that communication is the key to starting or keeping a relationship, he also clearly shows how communication is sometimes problematic, in life and throughout the novel. This is because of the idea that logic is sometimes flawed, the lack of understanding about the human interactions, and how different views of communication clash to cause conflict.

Don't use plagiarized sources. Get your custom essay on
“ The Curious Incident of the Dog in the Night Time Depicts Human Communication as Problematic. Do You Agree? ”
Get custom paper
NEW! smart matching with writer

In the novel, Haddon explores the idea that using logic to communicate is not as effective as using emotion. Haddon emphasises that communication is sometimes problematic because of Christopher’s reaction to certain gestures and words. This is because in life, a simple gesture can ‘mean lots of different things.’ Christopher’s interpretation of certain words and gestures are much like in society, when people misinterpret sayings. In the life of Christopher, he is unable to communicate in a way that is ‘socially acceptable’, as he does not understand why phrases are said, instead, he says them because it is what ‘you’re meant to say’.

Due to Christopher’s social attitude, it creates a lot of obstacles in which society deems him someone with ‘special needs’.

‘I like dogs. You always know what a dog is thinking. It has four moods. Happy, sad, cross and concentrating.’ Christopher places great emphasis on facial expressions throughout the novel. However, one could argue, that it isn’t how fast these expressions move, or how complicated they are, that gives him the most trouble.

When Christopher sees Wellington, his neighbour’s dog dead, it suggest that the real issue is that people often try to conceal their true feelings and intentions, and disguise this emotion behind a misleading smile or a frown. Seeing this, we can see that Christopher thinks that dogs are much simpler to understand compared to humans. Through this, we can see how by hiding or disguising our thoughts and intentions, we can make communication much more difficult problematic.

Another aspect in which we see communication as problematic is how different views on communication can cause conflict. Haddon shows this from how Ed’s idea of love is clearly different to Christopher’s. Though Christopher feels betrayed by Ed when he discovers the letters, Ed assures him that he hid them “for [Christopher’s] good.” When Judy and Ed confront each other towards the novel’s conclusion, Ed displays his censure for Judy’s lack of involvement in Christopher’s life, arguing that he “look after him when he was ill… [And] went to school every time he got into a fight,” while she simply wrote him some “… letters.” In this, we see how society views communication, as everyone has different views and thoughts towards the ideal way of communicating. This however, creates conflict as in the novel, as certain views clash.

The Curious Incident of the Dog in the Night Time Depicts Human Communication as Problematic. Do You Agree?. (2016, Apr 02). Retrieved from https://studymoose.com/the-curious-incident-of-the-dog-in-the-night-time-depicts-human-communication-as-problematic-do-you-agree-essay 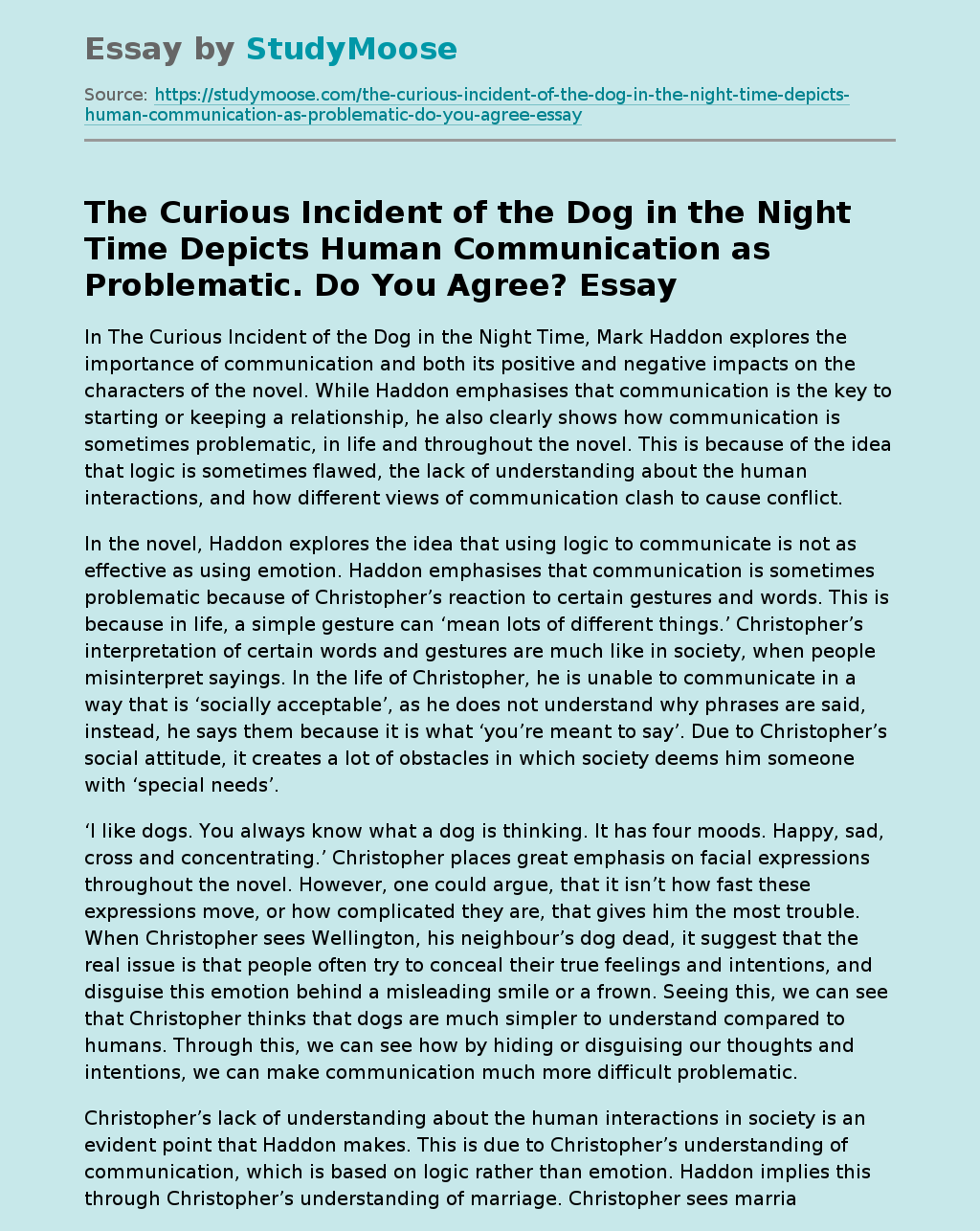