"The Curious Incident Of The Dog In The Night-Time" by Mark Haddon: Features of the Novel

Individuals often face many challenges and obstacles in life, as they may not conform to mainstream society. In the novel The Curious Incident Of The Dog In The Night-Time, Mark Haddon’s unique characterisation of the Protagonist Christopher Boone, faces autism with difficulties of telling the truth, through our ability to maintain control and stability and the distinctive communication with others.

Don't use plagiarized sources. Get your custom essay on
“ “The Curious Incident Of The Dog In The Night-Time” by Mark Haddon: Features of the Novel ”
Get custom paper
NEW! smart matching with writer

However, Mark Haddon adopts language techniques in order to portray his message through the features, allowing the audience to understand Christopher’s situation.

Truth and acceptance allows an individual to feel safe and secure in society. Haddon as an individual who is incapable of telling lies portrays Christopher; hence he depends on the truth to feel a sense of comfort. However, Christopher provides logical evidence to prove his behavioural problems with the use of footnote when he indicates “once I didn’t talk to anyone for 5 weeks”.

Christopher suggest his behavioural problem through listing through this, it helps Christopher to communicate his problems to the audience. At the same time, Haddon’s emphasis on the protagonist uncertainty is further illustrated with Christopher’s interpretation for not telling lies, “ I do not tell lies”.

Christopher, mother used to mention that this was because I’m a good person. Hence, but it is because Christopher can’t be exposed to tell lies. Overall, Haddon’s specified explanation and repetition of these lines mentioned above, illustrates Christopher’s trust, which is an important aspect in his generation.

However, Christopher undermines his feeling towards the commitment to define his interpretation to accumulate his conscious towards others. Conversely, The composer also uses the structure of a crime and detection genre in order to implement the murder of the neighbourhood dog, wellington.

The genre leads to statistics, investigation and a scenario that appeals to the truth, “do you know who killed wellington?’’ Mrs shears did not answer him. Hence, she just said “good bye Christopher and shut the door’’. At the same time, the use of rapid action creates a sense of a rigid conversation between Christopher and Mrs shears, which triggers Chris to investigate the murdering of Mrs shears dog. Additionally, Haddon’s use of techniques interacts the audience by understanding Christopher’s character as he explores numerous hardships and obstacles in life due to the value of truth.

Having control throughout life allows an individual to experience a stable lifestyle. Haddon portrays Christopher as a unique character who is a logical and honest person. Hence, he depends on the truth through his reoccurring anxiety, which may be quite challenging in order for Haddon to work with an autistic person. Throughout, the novel Christopher provides factual language to prove his problem with his father. The protagonist Christopher finds out that his father was lying to him about the murder of the neighbourhood “wellington”. Thus, when he indicates, “ Father had murdered wellington”. Therefore, Christopher’s specified explanation above portrays the need for Christopher to be distress and frustrated.

Hence, in order for Christopher to be unimpressed he has to be controlled due to his autistic suffering, which may impact what he does in society. However, the composer also uses humour through irony “I am arresting you for assaulting the police officer”…. this made me feel a lot calmer because it is what policemen say on television.” This irony adjusts the audience to understand Christopher’s stability is formed by what he is aware with not what society feels is correct or incorrect. Furthermore, Haddon’s use of techniques interrelates the audience by accepting Christopher’s appeal as he suffers an autistic disorder with he may face struggles and obstacles in life due to control and disability.

Communication is vital ensuring that people express themselves through thoughts and feelings, which often is difficult to interact with individuals who have a disability. Haddon represents Christopher as a very unique character who sees a great total of society as ‘strangers’. Hence, Christopher doesn’t like to confront people who he has not met before. However, Christopher provides logical facts to prove his issue with talking to strangers the use of high modality when he indicates, “I don’t speak to strangers”. Hence, to emphasize that Christopher does not like communicating with the people that his unfamiliar with. Thus, according to the people around Christopher they know he has a difficulty with body language and adjusting his communication, while if strangers speak to him in ways he will not understand.

Christopher suggests his issue through identifying the problem through this; it helps Christopher to interact his problems to the audience. Furthermore, Haddon’s emphasis on the protagonist’s insecurities is portrayed with Christopher’s teacher ‘Siobhan’. Thus, Siobhan at school portrays Christopher with the use of emotive language of a touching, but ultimately quite sad image, which creates a clearer understanding of how difficult it is for Christopher to be unable to communicate with people. And the effort he has put to have a better understanding what people are saying which allows us readers to see the challenges as he explores in life due to communication. Similarly, Christopher has also shared a lack of communication towards relationship with society.

At school Christopher and his peers demonstrate a unique feature with the use of dialogue when he indicates, “When there is a new member of staff at school. I do not talk to them for weeks and weeks. I just watch them until I know they are safe”. Christopher suggests a valid fact through analysing his peers at school in order for him to know them well as he feels safe about them. Despite, the fact that Christopher accounts his peers as ‘strangers’ doesn’t help him integrate in society and may not feel a sense of belonging. Through this, Haddon’s use of techniques cooperates the audience by understanding the protagonist Christopher as he explores hardships and difficulties in life due lack of communication towards relationship with society.

In conclusion, Haddon’s study of distinctive ideas in The Curious Incident Of The Dog In The Night Time by Mark Haddon has been clearly granted through artistic story techniques. Haddon as an individual has portrayed Christopher the protagonist to overcome his worries and become autonomous. Through the unique characterisation of telling the truth, through our ability to maintain control and stability and the distinctive communication. These ideas adopt the audience to understand Christopher’s situation and how well they link the reader’s real life experience.

"The Curious Incident Of The Dog In The Night-Time" by Mark Haddon: Features of the Novel. (2016, Apr 11). Retrieved from https://studymoose.com/the-curious-incident-of-the-dog-in-the-night-time-by-mark-haddon-features-of-the-novel-essay 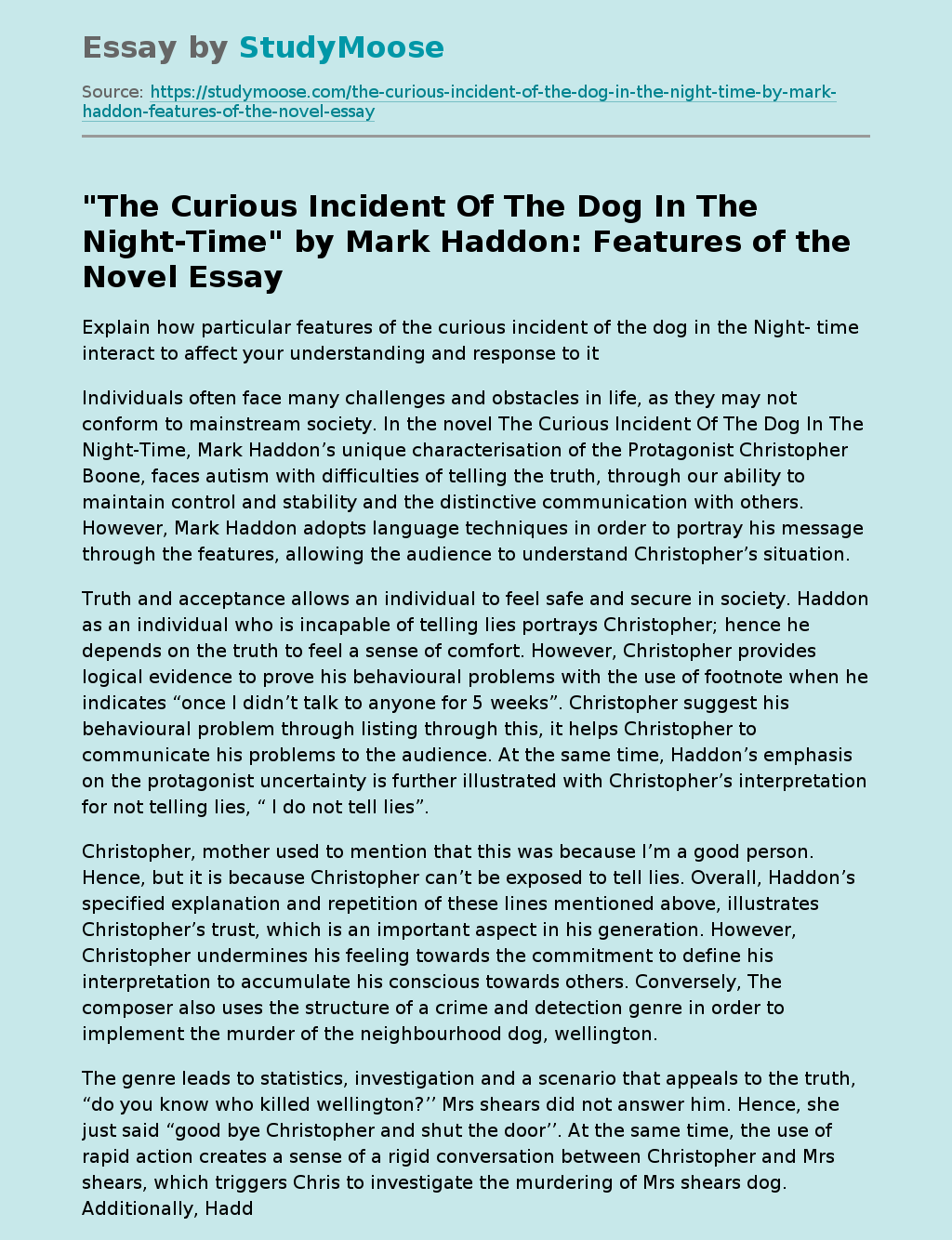