Character Analysis and Comparison: One Flew Over the Cuckoo's Nest' and Shawshank Redemption

Don't use plagiarized sources. Get your custom essay on
“ Character Analysis and Comparison: One Flew Over the Cuckoo’s Nest’ and Shawshank Redemption ”
Get custom paper
NEW! smart matching with writer

Darabont and Kesey use messianic imagery to display conflicts between hope and oppression. Darabont portrays Andy as a humble Christ figure who “…had a quiet way about him,” and strolled like he had “an invisible coat that would shield him from this place [Shawshank prison]” suggesting the same modest traits of Jesus.

Darabont uses this religious allusion to foreshadow that hope will prevail; Andy’s hope never fades, “…there is something inside that they can’t get to…Hope. ” Darabont used a birds-eye-view shot to place the audience in a God-like position when Andy escaped; with his hands outstretched as if to say, ‘thank you God,’ emphasising his hope for success and being ‘reborn’, like Jesus, into freedom. In contrast to Darabont, Kesey uses messianic imagery to convey oppression prevailing. McMurphy states that he is “not a saint or a martyr.

Unlike Darabont’s portrayal of Andy as a sombre and modest Christ figure, Kesey portrays McMurphy as loud and confident but puts on a facade for the sake of others, asking “Do I get a crown of thorns? ” when faced with electro-shock therapy and insisting “that it wasn’t hurting him,” telling the others that “all they was doin’ was chargin’ his battery for him. ” Kesey portrays him as ‘self-sacrificial’, like Jesus, because he resists giving in to the electro-shock treatment, just so he can keep hope alive in the other men. He is subsequently weakened because of this and it leads to his death.

In contrast to Darabont, Kesey used allegory of Christ to emphasise the oppression and the coming ‘crucifixion’, rather than representing the hope of rising again after it; they use messianic imagery similarly in portraying their characters as influential to the battle between hope and oppression. Kesey and Darabont use various metaphors and symbols to explore hope and oppression. Both use birds as a symbol; Kesey relates his characters to caged birds, emphasising that they are trapped. McMurphy mentions that “…a peckin’ party can wipe out the whole flock in a matter of a few hours,” referring to the destruction caused when the ward meet.

The only way to stop them “is to clip blinders on them. ” this metaphor emphasises the control that oppression has over them, by relating blind, following chickens, to the men; suggesting that they are also following and have no choice in oppression. Contrarily, Darabont uses the birds as a symbol of freedom and hope. Darabont’s character, Brooks, keeps a bird as a symbol of hope. Later he releases it into the wild telling him, “You’re free,” which emphasises Brooks’ dream to be free. This tells the audience to not take anything for granted, even a familiar thing like freedom.

At one point Andy plays a record so that everybody in Shawshank can hear and for a brief moment he lifts the oppression of the prison, and “It was like some beautiful bird flapped into our drab little cage and… for the briefest moment every last man in Shawshank felt free,” Darabont’s metaphors display a more positive sense of hope whereas Kesey’s metaphors are a reminder of the ruling oppression, giving the audience two very different perspectives on the contrasts between hope and oppression. Darabont and Kesey establish the effects that size has on hope and oppression, through the use of size- motifs.

Darabont uses a close up shot on Andy as he tells the court “it’s true,” after being questioned. Andy appears calm and ‘bigger’ in terms of power, showing he is unwilling to give up hope. Contrarily, Kesey uses the size-motif to show lack of control over oppression. He establishes Chief as a large character who sees himself as small and weak, saying that “I used to be big, but not no more,” only because he is powerless in Nurse Ratched’s oppression; they are consumed by oppression and have little hope left in them.

Darabont uses size-motif as a form of hope; when Andy confronts Warden Norton about his freedom, the eye-level shot demonstrates Andy’s equal power with the Warden and his hope of being free from oppression. When Andy asked, “How can you be so obtuse? ” the camera-angles did not indicate a shift of size, showing that Andy’s hope was still not diminished as the Warden demonstrated his own power and authority by confining Andy to solitary. Contrarily, Kesey shows that McMurphy brings hope into the oppression around him; when he laughs it “spreads…bigger and bigger till it’s lapping against the walls,” emphasising hat the size of McMurphy’s laugh gave the others hope; Kesey’s use of the size-motif in McMurphy’s laugh implies that hope can rescue people from oppressive society. Both Kesey and Darabont use the size-motif similarly, to tell the audience how power and oppression are linked together, in establishing and displaying the power of characters and settings, and their effect on either hope or oppression. Darabont and Kesey both use messianic imagery, symbols, and a size-motif, to convey hope battling with oppression.

Darabont utilises camera angles and bird symbols to emphasise the recurring theme of hope triumphing over oppression, giving the audience a positive outlook. Whilst Kesey left the audience with a negative impression of hope always struggling with a prevailing oppression, by utilising the same techniques as Darabont. They use these various techniques to convey that both hope and oppression are always conflicting, especially when there is a force of power involved. However, they also convey that hope and oppression can be viewed in either a positive or negative way, as they portray the battle with different outcomes.

Character Analysis and Comparison: One Flew Over the Cuckoo's Nest' and Shawshank Redemption. (2020, Jun 01). Retrieved from https://studymoose.com/character-analysis-comparison-one-flew-cuckoos-nest-shawshank-redemption-new-essay 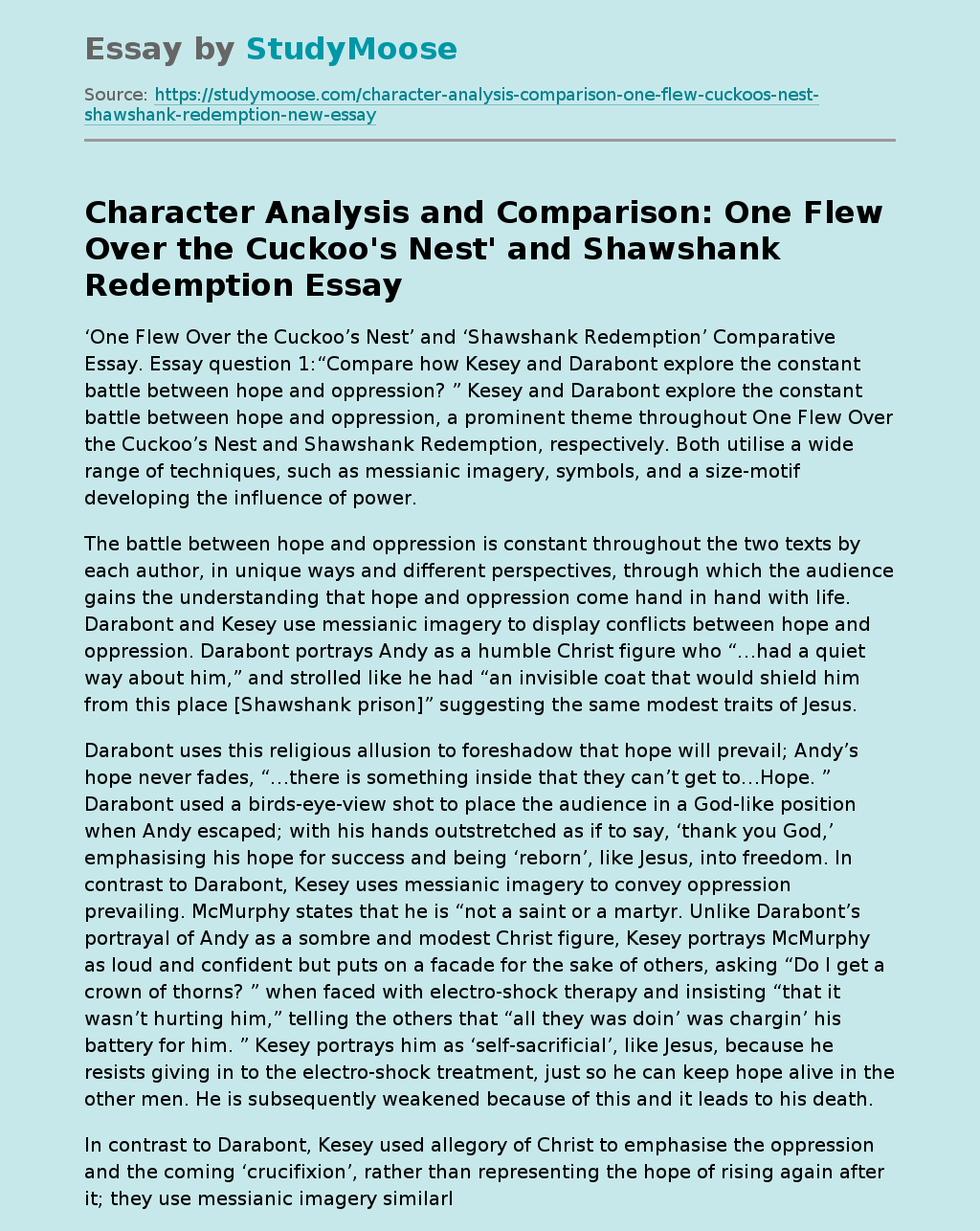