Stigma in The Film "One Flew Over the Cuckoo's Nest"

Although the 19th century expansion of asylums in Europe and The United States was a movement initially based on moral principles, it led to significant negative implications for individuals, who were institutionalized as asylums became overcrowded, lacking hygiene, neglectful of patients and an overall place for poor living conditions (Wright, 1997). The rise in in-patient population in the early 19th century and patients’ inabilities to reintegrate into the community as a result of institutionalization have often been explained in terms of the mental health system and developments in psychology at the time.

Don't use plagiarized sources. Get your custom essay on
“ Stigma in The Film “One Flew Over the Cuckoo’s Nest” ”
Get custom paper
NEW! smart matching with writer

Sociologists on the other hand, have argued that these institutions have caused people to remain institutionalized.

A compelling theory that explains this historical phenomenon is labeling theory. Labeling theory proposes that deviance in not only a result of the actions and behavior of the individual, but is also a product of the society that defines deviance (Brym, Lie, Retina, 2007). When applied to mental illness, the theory states that when an individual is labeled as mentally ill, “the negative cultural conceptions of mental illness become personally relevant, which then damages self-feelings” (Kroska & Harkness, 2008).

This suggests the negative effects of institutionalizing individuals suffering from mental illness. In particular, that labeling individuals as mentally ill causes them to adopt that label as part of their identity and acting in accordance with that label. Support for this argument is evident in media portrayals of the mental asylum such as in the film One Flew Over the Cuckoo’s Nest starring Jack Nicholson, as well as in empirical studies.

The theme of labeling is a recurrent theme in the film One Flew Over the Cuckoo’s Nest. This film challenges the notion of mental illness, and it’s existence in the characters of the film. Several scenes in the film are suggestive that the patients in the psychiatric ward define themselves as “crazy” because they are labeled as so. This idea is first evident in the scene where Randle McMurphy drives away in the school bus with his fellow ward patients. Randle picks up a woman who in her first greeting asks the patients if they are all “crazy” and they respond by nodding their heads. This shows that these individuals have come to adopt being “crazy” as part of their identity, because of being institutionalized and given that label. Further suggestion of this idea is in the scene where Nurse Ratched reveals to Randle that many of the in-patients are at the psychiatric hospital on a voluntary basis, and only few of them are committed, showing their internalization of their identity as mentally ill patients.

Another point that can be drawn from the film is the way, which Nurse Ratched conducts the group therapy sessions. The sessions did not appear as beneficial or therapeutic to the individuals participating in them. It is evident that Nurse Ratched, an individual in a position of power, manipulates the patients into confinement in the hospital through her group therapy sessions. She consistently revisits past traumas and difficulties for the patients, which reinforces the symptoms they believe they suffer from which causes them to feel unstable and unable to leave the hospital. Thus, through these examples in the film, it is suggested that individuals admitted to psychiatric hospitals have come to adopt their mental illness as a defining feature of their identity.

Empirical studies that have shown support for the utility of labeling theory, include a study done by Kroska and Harkness (2008), which examined the role of diagnostic labeling in individual’s self-construal The study examined whether psychiatric patient’s diagnostic category affected the individual’s self-appraisal. The findings of this study suggested that an individual’s diagnosis moderates the relationship between stigma and an individual’s internalization of their identity as mentally ill patients.

In conclusion, labeling theory provides it’s utility as it is evident in media representations of mental asylums such as the movie One Flew Over the Cuckoo’s Nest and empirical evidence directly examining it’s utility.

Stigma in The Film "One Flew Over the Cuckoo's Nest". (2016, Mar 23). Retrieved from http://studymoose.com/stigma-in-the-film-one-flew-over-the-cuckoos-nest-essay 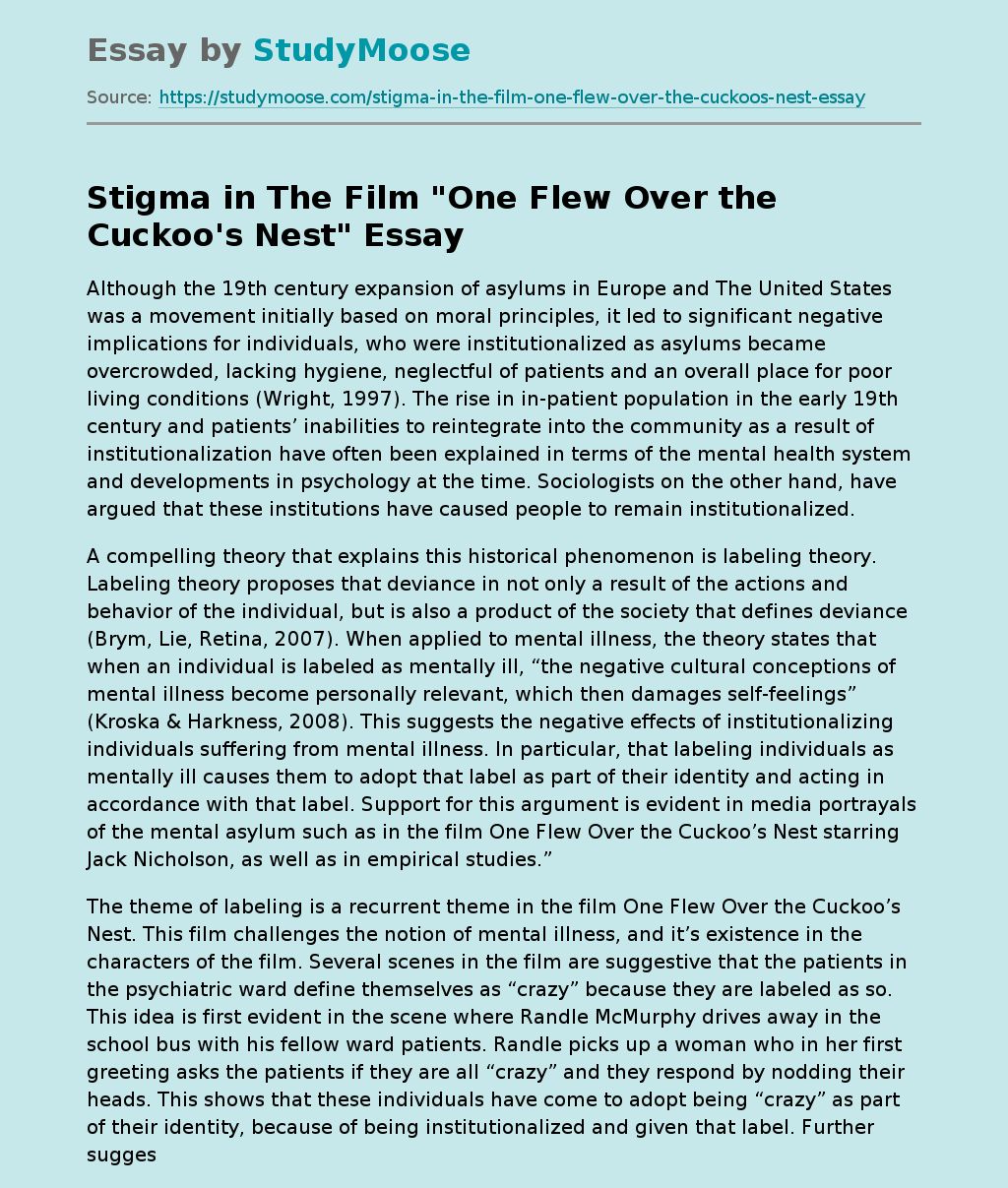