The Film Theories of Eisenstein & Bazin

The language of cinema has been developed by trail and error over the past one hundred years by pioneers venturing into uncharted territory. Today anyone with a T.V. set is accustomed to the language, perhaps without even realizing they are taking part in a “conversation”. This conversation has to be created by using a cinematic language. Among such pioneers that crafted this language are, Sergei Eisenstein, a man who is thought of to be the “father of modern cinema” and Andre Bazin, a film theorist that had a major impact on the world of cinema.

Both men with completely opposite thoughts as to how the conversation should unfold. Andre was what one might call a “Realist”. This idea walks the line of what is considered to be a documentary film where we look through the window and observe an untouched reality with no human intervention. Eisenstein believed cinema should intellectually challenge his audience and everything within is a constructed formalistic world inside a frame, simply put, Eisenstein was a “Formalist”.

This essay will probe the differences and similarities between two heavy weights in cinematic history and what they were attempting to achieve, a cinematic truth.

Here, a brief history of Sergei Eisenstein to set way our inquiry. Sergei was born into a middle class family in Riga, Latvia; his father was an architect, which influenced his scholarly career greatly. He began studying engineering to follow in the footsteps of this father though he would end up joining the military with his fellow students to serve the Red Army in 1918.

After two years with the military, he moved to Moscow where he began a career in theatre. It was here; over the short span of three years with the theatre working for “Prolekult” Eisenstein was inspired to begin work as a theorist by writing “The Montage of Attractions”. His first film “Strike” (1925) started his career in film with the political overtone that would bleed into his later works. Later that same year, Eisenstein wrote and directed his most widely known film “The Battleship Potemkin”. It was a critical success and a film many decades ahead of it’s time. It used his montage to unravel images to pieces and slamming them back together in order to create a cubism effect with the juxtaposition of images.

Eisenstein’s idea of the montage was a specific use of film editing he called “dialectical montage”. This is how Eisenstein sought out cinematic truth. In the opening sentences of “A Dialectic Approach to Film Form” Eisenstein states, “According to Marx and Engels the dialectic system is the only conscious reproduction of the dialectic course of the external events of the world” (Eisenstein, 1). For Eisenstein truth was dialectic, which led him to understand that cinemas portrayal of reality must be dialectical. Eisenstein was formalistic and constructed cinema to challenge his audience at a conscious and sub conscious level. He theorized that “cinema was the synthesis of art and science”, where art being the thesis and science the antithesis. Eisenstein felt that without a synthesis conflict in cinema was too linear.

Cinema needed to be crafted by the edits, shots, and lighting to properly communicate the ideas, emotions and themes, rather than concentration on the themes as a work in of itself. It is here that Eisenstein finds the true meaning of the essence, for example; when in “October” (1928) Eisenstein creates a montage between pictures of a robotic peacock and Alexander Kerensky (a former political leader during the Russian Revolutions, 1917), Eisenstein is showing us the “cinematic truth” of Kerensky by the juxtaposition of intercut shots. This was where the cinematic truth lay for Sergei Eisenstein, in the heart of the montage. But not everybody agreed.

Andre Bazin was born in Angers, France in 1918. He began to write about film in 1943 until co-founding film magazine “Cahiers du Cinema” in 1951. Bazin found that film should depict what he saw as an objective reality.

The Eisenstein approach, he felt, puts too much “faith in the image” (Bazin, 24) where the message is derived solely by the juxtaposition of images; which in Bazin’s eyes is not a cinematic, universal truth. Instead he favored the neo-realism movement coming out of Italy in the mid 1940’s which he said put “faith in reality” (ibid, 24). Being a fan of “realism” and “neo-realism”, Andre preferred a cinema without human intervention and letting the shots play out rather than intercutting and juxtaposing images. Bazin felt that this was a cinema of fact. The shot itself displays the truth to the audience and does not need any kind of manipulation to convey the theme, which is exactly the opposite of what Eisenstein proposed earlier. Bazin’s realist approach lets the events speak for themselves.

A prime example of such a film for Bazin is, “Rossellini’s Paisa” where he is quoted as saying “The unit of cinematic narrative in Paisa is not the ‘shot’, an abstract view of reality which is being analyzed, but the ‘fact’” (Bazin, vol. 2, 37). It is within these facts that Bazin feels the cinematic truth unfold. For Bazin, film must respect this philosophy if it is to be a universal truth. This ideology Bazin popularized could easily be misunderstood. He is not solely speaking of your typical, objective fly on the wall documentary, where all you do is observe and record all events. Bazin made it clear that, just like with any art form, you must “choose between what is worth preserving and what should be discarded” (Bazin, 26).

Having taken a look at both Eisenstein and Bazin’s ideas, it is obvious that they both share a common goal. I find it interesting that; in the end they are both correct in their own right even with the drastically different approaches. Both men understood film as an art form and knew that the artist had to decide what was worth keeping and what should hit the editing room floor.

Just because Eisenstein finds meaning through unraveling symbolic juxtaposing images being slammed back to back and Bazin through studying the event (fact) when there is no need to interrupt the fact with more images. So whose ideology achieves true cinematic truth? Bazin’s realism or Eisenstein’s Kino-Fist formalism? Well, the conclusion one might draw is that there is no ‘right or wrong’ way. Both ideologies have their places but, ironically, they are incomplete without each other. Bazin’s realist approach won’t always get the attention of the audience, where Eisenstein would. To contrast, Eisenstein’s montage isn’t always appropriate either, sometimes for an event to truly connect with the audience; it should simply unfold before their eyes.

The Film Theories of Eisenstein & Bazin. (2016, May 10). Retrieved from http://studymoose.com/the-film-theories-of-eisenstein-bazin-essay 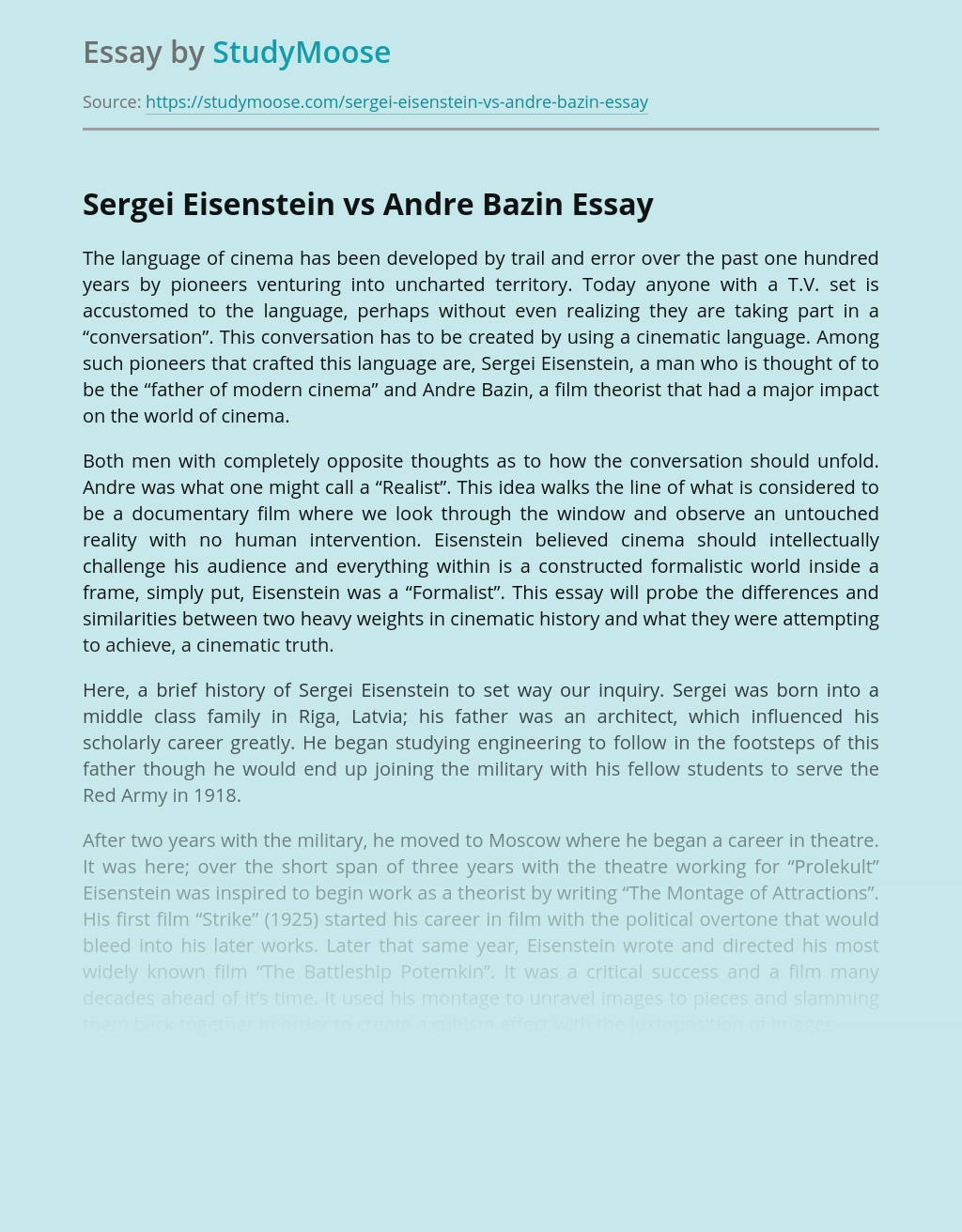 Don’t waste time
Get a verified writer to help you with The Film Theories of Eisenstein & Bazin
Hire verified writer
$35.80 for a 2-page paper
Stay Safe, Stay Original