“Invisible Man” by Ralph Ellison is scattered with symbolism. Especially the first scene, which is widely known as the “Battle Royal”. This is an important section in the novel, for the reader is introduced to the Invisible Man as someone who is not listened to by most, interrupted by many and instructed to know his place at all times.

From the very beginning of the novel the narrator values his education. His education first brings him a calfskin briefcase, when the superintendent rewards him for his success, saying, “Take this prize and keep it well.

Don't use plagiarized sources. Get your custom essay on
“ Symbolism in “Invisible Man” by Ralph Ellison ”
Get custom paper
NEW! smart matching with writer

Consider it a badge of office. Prize it. Keep developing as you are and some day it will be filled with important papers that will help shape the destiny of your people.” (Ellison; pg. 32) The Invisible Man treasures the briefcase that included a scholarship to the state Negro college so much but it represents the life that the white authority figures have planned out for the Invisible Man.

It was covered in white tissue paper, symbolizing the white control over his planned life.

The last few paragraphs of this chapter are embedded with symbolism and foreshadowing. For example when he arrives home after the “Battle Royal” the Invisible Man believes that he has actually accomplished something by accepting the scholarship. When I reached home everyone was excited. Next day the neighbors came to congratulate me. I even felt safe from grandfather, whose deathbed curse usually spoiled my triumphs. I stood beneath his photograph with my brief case in hand and smiled triumphantly into his stolid black peasant?s face.

It was a face that fascinated me. The eyes seemed to follow everywhere I went.? (Ellison; pgs. 32-33) The eyes in his picture represent the Invisible Man?s constant feeling that his grandfather is watching over him and continually judging his actions.

Later on in his dream the reader is brought into the scene of the Invisible Man?s grandfather lying on his bed and instructing the Invisible Man to open an endless number of envelopes. Then he finally arrives at the last one. “To Whom It May Concern,” it states. “Keep This Nigger-Boy Running.” The Invisible Man awakens to the ringing laughter of his grandfather. This dream was a foreshadowing of the life that the Invisible Man is about to jump into. The white male authority figures will be part of the things that will keep him striving to be personally successful while at the same time helping the white man.

The narrator’s entrance to the paint plant is ominous, as he must cross a bridge in the fog, implying that he is unable to see out and around him. As he emerges into the plant he sees a sign that reads: “KEEP AMERICA PURE WITH LIBERTY PAINTS.” This symbolizes a level of racism that was prevalent during that time. The word ?pure? is a metaphor for no mixing of the black and white race and no progress of the black race. The word liberty here does not apply to the black race.

The Invisible Man?s first task when he arrives at the paint plant is to make the pure white paint that the company is so well known for. In this chapter his boss Mr. Kimbro instructs him to add drops of dead black dope to make the paint the purest white that can be found. The mixing of the paint is emblematic of the white race using blacks to further advance their society without acknowledging black contributions.

According to Anne Seidlitz, who wrote in an introduction to the recent PBS documentary on Ralph Ellison, “Ellison” view [was] black and white culture were inextricably linked with almost every facet of American life influenced and impacted by the African-American presence?including music, language, folk mythology, clothing styles and sports.? Ellison?s paint metaphor represents the involvement of the black experience without visible and tangible results.

Ralph Ellison “Invisible Man’ portrays the predicament of African-American life as a symbol of the search for identity in an indifferent and chaotic world. 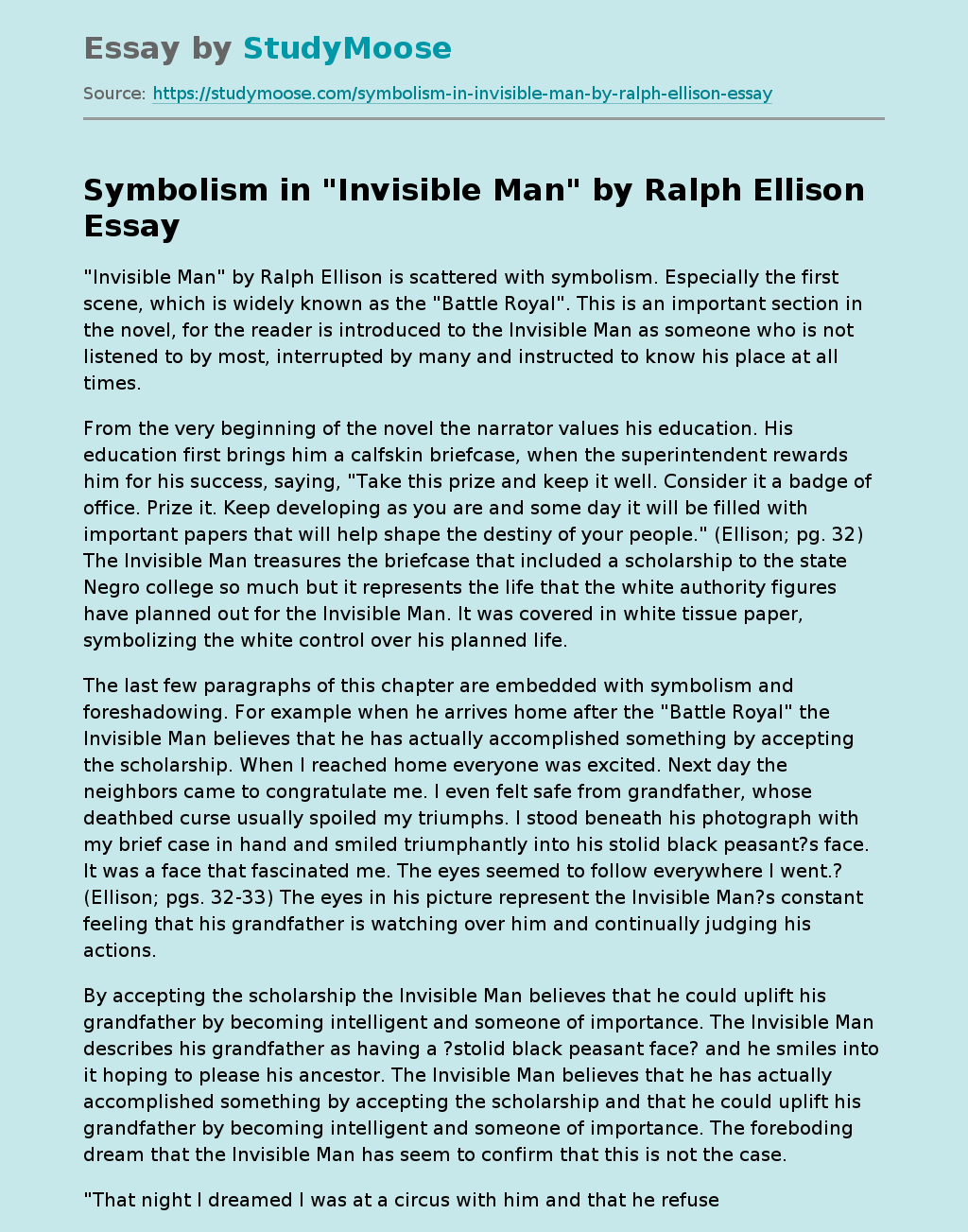