Ralph Ellison wrote “Invisible Man” which was his story of the black experiences in America and “Battle Royal” was derived from the opening chapter of “Invisible Man”. “Battle Royal” was published as a short story in 1947 and provides the reader with a look at the struggles of black people in a white America. After giving a speech at his graduation, the narrator is invited to give the speech to many of the leading white people of the town only to discover that he was to be part of that battle royal.

Don't use plagiarized sources. Get your custom essay on
“ Symbolism and “Battle Royal” by Ralph Ellison ”
Get custom paper
NEW! smart matching with writer

The “Battle Royal” provides the reader with many examples of symbolism including the battle itself, the blind folds during the battle, and the electrified coins after the battle.

The foremost symbol utilized in the story is the battle royal itself. The battle royal symbolizes the struggle for equality for the black culture. The fight is an allegory illustrating black America’s efforts to overcome oppression and fear spanning from the malevolence of slavery to the persecution of segregation.

Each of the black boys are instructed by white men “‘to run across at the bell and give it to him right in the belly. If you don’t get him, I’m going to get you'”(331). The overwhelming situation leaves the boys terrorized and with little choice but to obey.

Another example of symbolism is the blind folded boxing in the story, which symbolizes the blind hatred of blacks. By blind hatred, I mean the ignorance of the people of the time who could hate a person for the color of their skin.

The boxers in the ring wailed at each other, not knowing whom they were hitting or why, just that they had to fight. The narrator declares that “blindfolded, I could no longer control my motions. I had no dignity. I stumbled about like a baby or a drunken man”(331). This was true in the white American society of the time because they didn’t know the black people, they blindly sent blows of segregation without actually knowing each individual, but stereotyped a whole race as no good and as lesser beings simply for the color of their skin.

The third symbolism in the story is the electrified coins. After the battle royal the black men are instructed to get their money off of an electrified rug, where they are shocked when they touch the metal coins. Even though they are continuously shocked, the boys reach for the money and according to the narrator, “they snatched and grabbed, snatched and grabbed”(334). The electrified coins become a symbol for the pursuit of black American’s for economic success and equality.

The presentation of the reward exhibits how the black community is easily controlled by white society. Even though the fighters were battered and humiliated, they forget this once they see the money. The narrator states, “I trembled with excitement, forgetting my pain. I would get the gold and bills. I would use both hands. I would throw my body against the boys nearest me to block them from the gold”(333).

The short story “Battle Royal” tells the story of black Americans struggling for equality, dealing with being hated for the color of their skin, and their pursuit of economic success. Although it was a very difficult and painful experience for black Americans at the time, it was a battle worth fighting and many of their obstacles have been overcome. 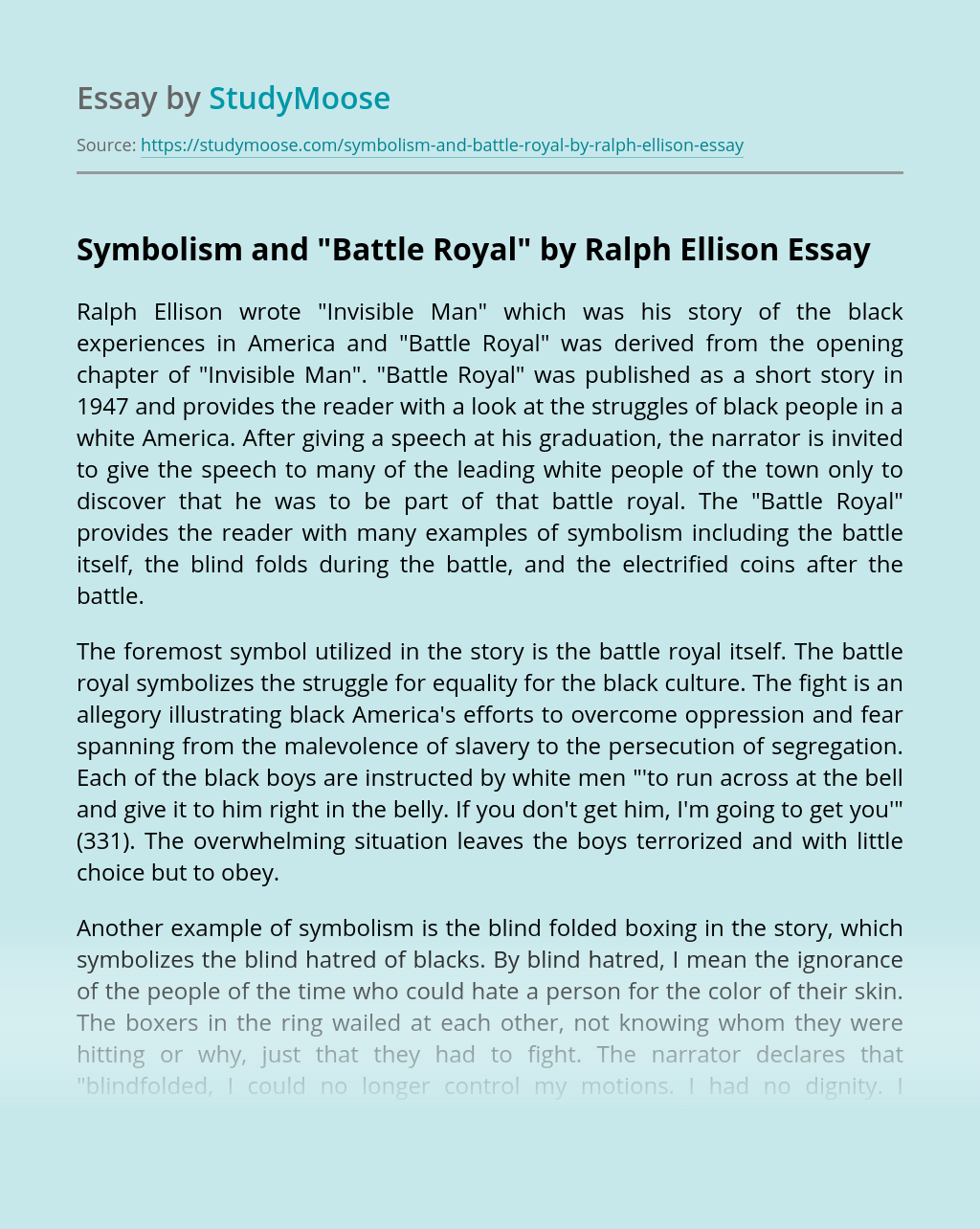