Larry Ellison: His Way to Millions

Lawrence Joseph “Larry“ Ellison is a co-finder of Oracle Corporation. It’s one of the world’s leading enterprise software company. As of 2012 he is considered one of the wealthiest men alive, with a net worth of $41 Billion.

Larry Ellison was born in Manhattan, New York City. His mother, Florence Spellman, was an un-married 19-year-old of Jewish women, and his father was an Italian American U.S. Air Force pilot. After Larry Ellison was born he was very sick with pneumonia at the nine months, his mother realized that she was unable to care for him anymore, and arranged for him to be adopted by her aunt and uncle in Chicago.

Don't use plagiarized sources. Get your custom essay on
“ Larry Ellison: His Way to Millions ”
Get custom paper
NEW! smart matching with writer

Lillian Spellman Ellison and Louis Ellison adopted him when he was nine months old. Lillian was the second wife of Louis Ellison, an immigrant. Larry Ellison did not meet his biological mother again until he was 48. Ellison grew up in a two-bedroom apartment in Chicago’s South Shore middle-class Jewish neighborhood.

Louis, his adoptive father, was an government employee who had made a small fortune in Chicago real estate, he lost it during the Great Depression. Larry was a very intelligent young man, he unfortunately had to leave because his adopted mother (his aunt) passed away. After her passing Ellison went to Northern California to attend University of Chicago. In 1964, he moved to Northern California permanently.

During the 1970s, Ellison worked for Ampex Corporation. Ellison was inspired by the paper written by Edgar F. Codd on database systems called “A Relational Model of Data for Large Shared Data Banks”.

In 1977, he founded Software Development Laboratories. In 1979, the company was renamed Relational Software Inc. later it was named Oracle. In 1994, Informix took over Sybase and became Oracle’s most important rival. In April 1997, Informix announced a major decrease in their earnings; Phil White soon landed in jail, and Informix was again taken over by IBM in 2001. Also in 1997, Ellison was made a director of Apple Computer after Steve Jobs came back to the company.

Ellison resigned in 2002. In April 2009, Oracle announced its intent to buy Sun Microsystems. On August 9, 2010, Ellison let Hewlett-Packard’s board go for firing CEO Mark Hurd .Ellison and Hurd are close personal friends. On September 6, Oracle hired Mark Hurd and made him Co-President. Ellison refused to take the CEO position. Ellison owns stakes in Salesforce.com, NetSuite, Quark Biotechnology Inc. and Astex Pharmaceuticals. On June 20, 2012 it was reported that Ellison had agreed to buy the 98 percent of the Hawaiian island of Lana’i. The price was reported to be between $500 million and $600 million

Larry Ellison: His Way to Millions. (2017, Feb 03). Retrieved from http://studymoose.com/larry-ellison-essay 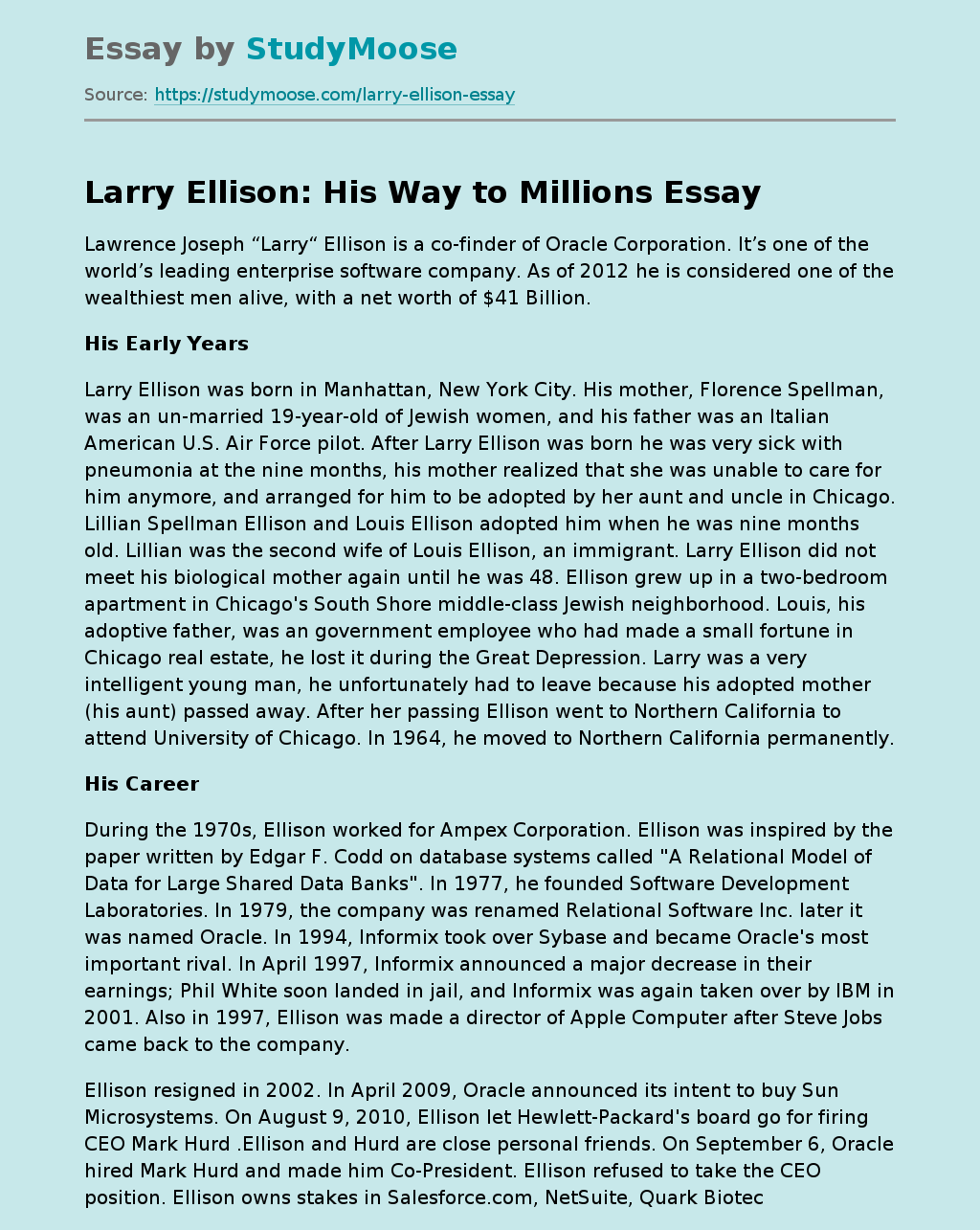